The fragmentation of Yemen is well under way with two separate governments claiming legitimacy. President Abdu Rabbu Mansour Hadi continues to proclaim his right to lead Yemen and is establishing a government in Aden while the al Houthis attempt to govern from Sana'a. 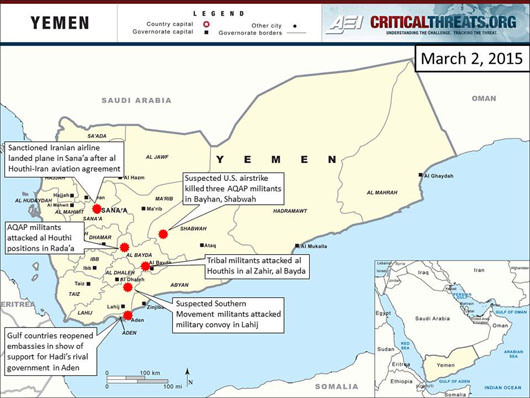 The fragmentation of Yemen is well under way with two separate governments claiming legitimacy. President Abdu Rabbu Mansour Hadi continues to proclaim his right to lead Yemen and is establishing a government in Aden while the al Houthis attempt to govern from Sana’a. Factions of Yemen’s Southern Movement, which seeks the re-creation of an independent South Yemen, however, appear to be rejecting Hadi’s claims to power. Gulf States are moving their embassies to Aden in support of Hadi and in opposition to the al Houthis, likely accelerating Yemen’s fracture.

Two rival governments are emerging as Hadi sets up government in Aden. Gulf countries including Saudi Arabia, Kuwait, the United Arab Emirates, and Bahrain reopened their embassies in Aden on February 27 after having closed them in Sana’a due to security concerns. It is rumored that Egypt will reopen its embassy in Aden as well. China, Russia, Oman, and Iran have kept their embassies open in Sana’a, effectively siding with the al Houthis.  Separately, Hadi met with tribal sheikhs and leaders from Ma’rib, al Bayda, and al Jawf in Aden on March 1. Tribal leaders from the three governorates reportedly gave their support to Hadi. Hadi is from the southern governorate of Abyan and may try to build local support for himself.

The al Houthis are deepening their relationship with Iran amid increasing regional isolation. The al Houthis and Iran signed an agreement on February 28 in Tehran allowing Yemenia Airways and Iranian Mahan Air to operate 14 flights a week between the two countries. Mahan Air has been sanctioned by the U.S. Treasury since 2011 for facilitating the movements and operations of the Islamic Revolutionary Guards Corps (IRGC) Qods Force and Lebanese Hezbollah. Mahan landed an airplane purportedly carrying 12 tons of medical supplies and Red Crescent aid workers in Sana’a on March 1. Al Houthi political leader Saleh al Simad led a delegation to Tehran the same day to discuss furthering economic and political ties.

UN-brokered negotiations stalled after disagreements over the location of the talks. Negotiations between al Houthis and Yemeni political actors led by UN Special Envoy to Yemen Jamal Benomar ended on February 27 after political parties boycotted talks. The al Houthis and the General People’s Congress, the party of former president Ali Abdullah Saleh, are demanding that talks resume in the capital, Sana’a. President Hadi and other political factions want talks to be held in a “neutral” city like Taiz. The Southern Movement suspended its participation in negotiations and insisted that talks be held outside the country. The crystallization of multiple de facto governments in Yemen renders the significance of these talks dubious.

Al Qaeda in the Arabian Peninsula (AQAP) and tribes continue to fight the al Houthis’ southward advances. Militants from AQAP’s insurgent arm, Ansar al Sharia, and backed by tribal gunmen, attacked al Houthi positions in Rada’a city, al Bayda, south of Sana’a on February 28. Separately, tribal gunmen blew up a house on March 1 in al Zahir, near the al Bayda-Abyan border, reportedly killing 15 al Houthis. The attack occurred in an area where al Houthis previously had an agreement with local tribes to enter. Local sources also reported that AQAP militants and tribal fighters gathered in Bayhan, near the al Bayda-Shabwah border to prevent an al Houthi incursion into Shabwah. There is a growing danger that AQAP may be able to position itself as the most effective combat force resisting the al Houthis as anti-Houthi governance is established in the south.  AQAP may try to replicate the model of Jabhat al Nusra in Syria, with which it is closely linked, although AQAP has yet to match Jabhat al Nusra's capabilities. Jabhat al Nusra gained de facto acceptance by virtue of superior organization and military capability among the Syrian opposition.

The U.S. continues its targeted airstrike program. A suspected U.S. airstrike killed three AQAP militants traveling in a vehicle in Bayhan, Shabwah on February 28. Bayhan is the area in which AQAP militants temporarily seized one of Yemen’s largest military bases before handing the base over to tribes on February 12.  Such strikes can have no meaningful impact on the developing situation in southern Yemen given the scale of political, military, and tribal forces now mobilizing there.

Yemen is witnessing a high degree of state fragmentation as regional and local actors align to resist further al Houthi expansion. President Hadi will have to compete for support in the south from among factions desiring secession, supporting AQAP, or wanting Hadi in control of the state.  Accelerations of violence and popular mobilization along sectarian and regional lines are very likely and will give AQAP greater scope to recruit and operate.