Abdu Rabbu Mansour Hadi, still recognized by the U.S. and others as Yemen's president, is building a loyal military force in Aden and continues to contest the al Houthi claim over Yemen's central government. 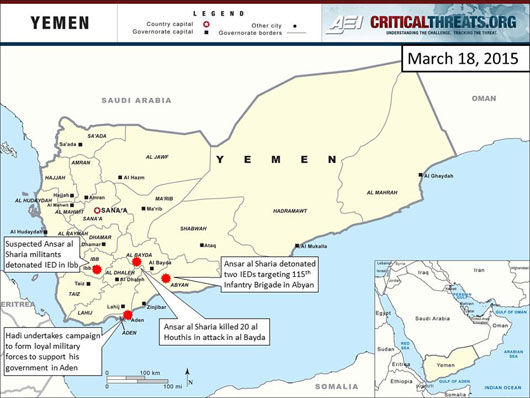 Abdu Rabbu Mansour Hadi, still recognized by the U.S. and others as Yemen’s president, is building a loyal military force in Aden and continues to contest the al Houthi claim over Yemen’s central government. The al Houthi leadership may be divided over whether to participate in proposed political negotiations in the Saudi capital, Riyadh, indicating a possible fracture between more militant and moderate factions of the movement.

Abdu Rabbu Mansour Hadi is calling up loyal security forces in his Aden-based rival government. Local authorities in Aden announced the commencement of a recruitment drive that aims to recruit over a thousand young men for pro-Hadi local militias in the governorate. These militias, known as popular committees, generally man checkpoints and police neighborhoods. Members of the Bani Helal tribal confederation from Shabwah arrived in Aden on March 14. They pledged their support to Hadi and stated they are ready to provide for Aden’s security. Hadi continues to contend with the pro-al Houthi commander of the Special Security Forces (SSF), Abdul Hafiz al Saqqaf, who refuses to relinquish command of the SSF. Separately, Hadi appointed Mahmoud al Subaihi as his Minister of Defense. Subaihi had served as acting defense minister under the al Houthi-led government until March 8, when he joined Hadi in Aden.

UN Special Envoy to Yemen Jamal Benomar continues to urge Yemen’s political parties to participate in political negotiations. Al Houthis released former Yemeni Prime Minister Khaled Bahah and other ministers from house arrest in Sana’a on March 16 in what appears to be a goodwill gesture for negotiations. Bahah and the other ministers had been held under house arrest by the al Houthis following their resignations on January 22.  Political negotiations will resume in Riyadh, Saudi Arabia, at the end of the month under the Gulf Cooperation Council’s (GCC) leadership, according to rumor. Separately, anti-al Houthi gunmen may have been behind the March 18 assassination of a journalist who had served as an al Houthi delegate in the National Dialogue Conference in Sana’a and supported the al Houthis’ dissolution of parliament in February.

The al Houthi leadership may be divided over whether to participate in talks in Riyadh. An anonymous source indicated that a moderate faction of the al Houthis is urging participation in negotiations. Publicly, the al Houthis have refused to participate in GCC-sponsored talks or talks held outside of Sana’a. Al Houthi leader Abdul Malik al Houthi last week strongly criticized the GCC and accused Gulf States of supporting al Qaeda. It was reported, however, that Abdul Malik stated that the group is in indirect contact with Saudi Arabia. It is unlikely the al Houthis, who continue to receive support from both Iran and former President Ali Abdullah Saleh, will come to political negotiations in good faith and willing to make concessions.

Opposition groups form anti-al Houthi coalition. Forty-four political parties, tribal groups, and civil society organizations announced the formation of the National Salvation Alliance (NSA), a coalition to oppose the al Houthis. The coalition includes Yemen’s Sunni Islamist party, al Islah (Reform), southern factions of the General People’s Congress (GPC), the Nasserist party, and the Justice and Building Party, which split from the GPC in 2011. The Bakil, al Jawf, and Ma’rib tribal confederations, as well as groups from al Bayda and Taiz, also joined the coalition. The coalition stated its support for the 2011 GCC initiative that established a political transition process for Yemen following the Arab Spring.

It is unlikely the UN or GCC will be able to bring about a political solution acceptable to both the al Houthis and Hadi as both rival governments entrench themselves in their respective capitals. While both governments will continue to combat AQAP, the deterioration of Yemen’s security forces and political instability will likely allow AQAP more operating room.