Al Qaeda in the Arabian Peninsula (AQAP) briefly seized territory in south Yemen and is continuing its campaign against the al Houthis. AQAP appears to be developing partnerships with local tribal forces by supporting their efforts to resist the al Houthis. 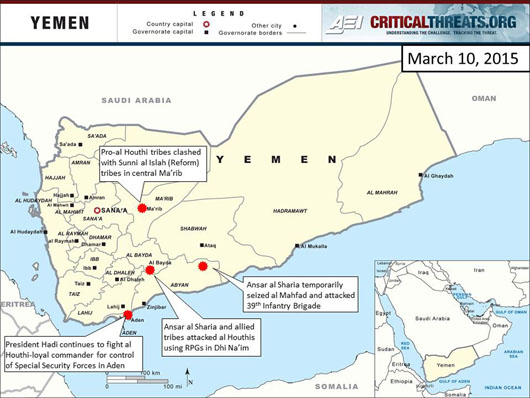 Al Qaeda in the Arabian Peninsula (AQAP) briefly seized territory in south Yemen and is continuing its campaign against the al Houthis. AQAP appears to be developing partnerships with local tribal forces by supporting their efforts to resist the al Houthis. Ongoing efforts to mediate the political crisis are unlikely to succeed, especially as the al Houthis conduct outreach efforts to Iran, China, and Russia in face of growing isolation in the region and from the West.

Ansar al Sharia, AQAP’s insurgent arm, temporarily seized the town of al Mahfad, Abyan in southern Yemen on March 9. Militants entered the town and took over a number of local buildings before advancing on the Yemeni 39th Infantry Brigade camp. Local militias, known as popular committees, later reported that they had expelled Ansar al Sharia fighters from the town. The Yemeni Air Force conducted airstrikes targeting militants near al Mahfad on March 9. AQAP seized control of most of Abyan governorate during the 2011-2012 unrest in Yemen and may be strengthening its presence in the area.

Al Houthi expansion toward the southern border of al Bayda continues to drive tribal support to Ansar al Sharia. There is now apparent coordination between local tribal fighters and Ansar al Sharia militants in the governorate. A joint attack against the al Houthis in Dhi Na’im in southern al Bayda killed 12 on March 8. Tribal fighters also planted an improvised explosive device that killed eight al Houthis in al Zahir, bordering Dhi Na’im. AQAP is probably seeking to establish itself as the only force able to combat al Houthis in order to gain support from local populations.

Gulf States are attempting to mediate a solution to Yemen’s political crisis. Saudi Arabia announced the Gulf Cooperation Council (GCC) would host talks in the Saudi capital, Riyadh, after a request from Hadi. Both the al Houthis and former president Ali Abdullah Saleh’s party, the General People’s Congress, previously refused to attend talks outside of Sana’a, making it unlikely all parties will agree to negotiations in Riyadh. The GCC helped negotiate the political transition deal that ended the political unrest in Yemen in 2011.

Al Houthis are attempting to forge economic ties with Iran, Russia, and China. The al Houthi outreach efforts are likely an attempt to increase oil revenues and income in the face of growing economic isolation. Saudi Arabia ended its critical financial assistance to Yemen in December 2014. Reports indicate that the al Houthis offered Tehran oil exploration in al Jawf and Sa’ada, both of which border Saudi Arabia. An al Houthi delegation is expected to visit China in the near future and an al Houthi delegation also went to Moscow to meet with Russian members of parliament. The al Houthis reportedly offered Russian companies future oil exploration rights in Ma’rib, east of Sana’a, in exchange for Russia’s recognition of the al Houthi government. No deal was reached, and the Russian Ambassador recognized Hadi as the legitimate Yemeni president on March 9.

President Abdu Rabbu Mansour Hadi seeks to consolidate his control of the security forces in Aden. Negotiations in Aden to replace the al Houthi loyalist currently in command of the Special Security Forces (SSF) in Aden resulted in a preliminary agreement to appoint the SSF commander in Shabwah governorate, Adlan al Hatas, as the new commander in Aden. Abdul Hafiz al Saqqaf, the current SSF commander in Aden, reportedly agreed to the proposal, but has not given up his post. Al Saqqaf refused to cede his post to a separate Hadi appointee last week and was rumored to have gathered forces to act against Hadi. Separately, Yemeni acting Minister of Defense Mahmoud al Subaihi escaped from house arrest on March 8 in Sana’a and fled to Aden.  It is unclear if al Subaihi will join Hadi’s government.

Yemen’s fracture will continue as the al Houthis and Hadi entrench themselves in their respective capitals and align with local and regional actors. The continued fragmentation of Yemen will likely accelerate armed conflict and give AQAP more room to operate. AQAP may be able to draw on anti-al Houthi sentiment among tribes in order to interweave fighters into local populations.