The al Houthis fired a Scud missile into Saudi Arabia, marking the first time ballistic missiles have been used in the current conflict. The use of a ballistic weapon will likely continue to escalate fighting between al Houthi and Saudi Arabia forces along the border and could potentially derail UN-brokered talks in Geneva scheduled for June 14. 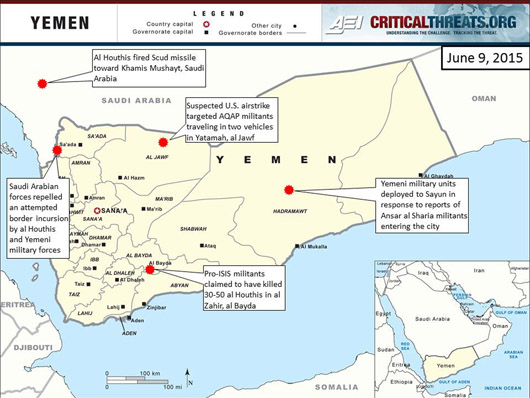 The al Houthis fired a Scud missile into Saudi Arabia, marking the first time ballistic missiles have been used in the current conflict. The use of a ballistic weapon will likely continue to escalate fighting between al Houthi and Saudi Arabia forces along the border and could potentially derail UN-brokered talks in Geneva scheduled for June 14.

The al Houthis appear to be escalating the conflict along the Saudi Arabian-Yemeni border. The Saudi Arabian military reported that it had intercepted a Scud missile fired from Yemen with two Patriot missiles on June 6. The al Houthis confirmed firing the Scud missile at the King Khaled Airbase in the Saudi Arabian city of Khamis Mushayt. Saudi Arabia also claimed that its forces repelled an attack on Jizan province by Yemeni military forces on June 5. Saudi Arabia reportedly deployed army units to reinforce the southern city of Jizan on June 7 and carried out heavy airstrikes in the Yemeni capital, Sana’a, resulting in a large number of civilian casualties.

The upcoming UN-led Yemen talks in Geneva are unlikely to produce a negotiated political settlement. Both the al Houthis and Abdu Rabbu Mansour Hadi’s government have agreed to join UN talks, though Hadi’s government continues to insist that the talks will focus on the implementation of UN Security Council Resolution 2216 and not on reconciliation. The resolution calls for the al Houthis’ disarmament and withdrawal from seized territory. The UN confirmed that talks will take place on June 14 in Geneva. Previously planned peace talks fell apart after both the al Houthis and Hadi insisted on preconditions before participating in any dialogue.

Fighters claiming affiliation with the Islamic State in Iraq and al Sham (ISIS) are making headway in al Bayda governorate. Pro-ISIS fighters claimed to have carried out attacks on al Houthi militants in al Zahir, al Bayda, south-central Yemen on June 2-3. The clashes reportedly killed 30-50 al Houthis. Anti-al Houthi popular resistance tribal fighters, however, also claimed credit for the attacks, making it unclear whether ISIS fighters have been coordinating with local tribal militias in al Bayda to combat the al Houthis. Al Qaeda in the Arabian Peninsula (AQAP) is also actively combatting the al Houthis in al Zahir and throughout southern al Bayda, indicating that ISIS may be seeking to compete with AQAP for dominance in the anti-al Houthi fight in al Bayda.

AQAP continues its operations in Hadramawt. Yemen’s First Military Region responded to reports of Ansar al Sharia militants in Sayun, Hadramawt, by increasing the presence of troops in the city in eastern Yemen, on June 4. The reports indicated that Ansar al Sharia militants were seeking to replicate the April 2 takeover of al Mukalla in Sayun. Soldiers raided several hotels in the area and arrested suspected militants. The deployment of troops to Sayun is the first known instance in recent months in which Yemeni military units have responded to combat AQAP. Separately, unconfirmed reporting alleged on June 5 that AQAP militants have been urging youths in Tarim, Hadramawt, to join the group and combat the al Houthis. An unconfirmed U.S. airstrike hit two cars carrying AQAP militants in Yatamah, al Jawf, on June 2. No casualty reports are available from the strike.

It is unlikely the planned June 14 talks will result in a political agreement between Yemen’s warring factions. The current conflict on the ground is likely to continue and will give both AQAP and ISIS more freedom to operate, particularly along the front lines of the conflict with the al Houthis. The start of Islamic holy month of Ramadan the evening of June 17 may lead to a decrease in fighting but will likely not halt the conflict.