Islamic State in Iraq and al Sham (ISIS) militants carried out their fifth, and possibly sixth, bombings targeting the al Houthis since the start of the Islamic holy month of Ramadan. The attacks indicate ISIS may have started a Ramadan offensive in Yemen against the al Houthis. 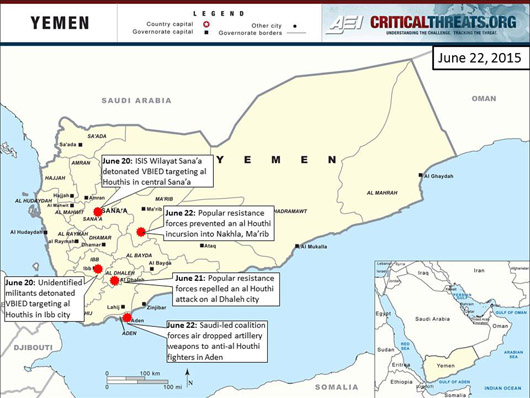 Islamic State in Iraq and al Sham (ISIS) militants carried out their fifth, and possibly sixth, bombings targeting the al Houthis since the start of the Islamic holy month of Ramadan. The attacks indicate ISIS may have started a Ramadan offensive in Yemen against the al Houthis.

ISIS militants appear to be carrying out a Ramadan vehicle-borne improvised explosive device (VBIED) campaign against the al Houthis in order to inflame sectarian tensions within the country. ISIS Wilayat Sana’a militants detonated a VBIED targeting al Houthis at a mosque in central Sana’a, on June 20. The June 20 attack may be an attempt to sustain a campaign against the al Houthis that began with the June 17 quadruple VBIED attack in Sana’a. It is not clear whether pro-ISIS groups in Yemen will also participate in the campaign or whether it will be limited to the environs of Sana’a. Unidentified militants also detonated a VBIED in Ibb city, Ibb, on June 20. The attack in Ibb targeted an al Houthi gathering, making it possible the attack was carried out by ISIS militants. A pro-ISIS Twitter account claimed ISIS militants were responsible for the attack, although al Qaeda in the Arabian Peninsula (AQAP) also targets al Houthis using VBIEDs.

A single-sourced report states that a new movement in Najran, Saudi Arabia, seized control of a Saudi military base in the area. Fars News Agency quoted Saudi political activist Abu Bakr Abu Ahmed al Salami stating that activists in Najran had formed a movement called “Ahrar al Najran” [Free Najran] in order to combat the Saudi regime on June 17. English-language Iranian press and al Houthi-controlled media picked up the report on June 20 and claimed the group had seized a Saudi military base in southern Najran. They also cited a statement issued last week from the tribes, which cannot be confirmed. Saudi media, which is highly censored, has not reported on Ahrar al Najran. Ahrar al Najran’s existence, if true, would be an indicator that the Yemen conflict is encouraging Saudi citizens from minority populations to mobilize against the Saudi government. It is also possible Iranian media is attempting to foment instability within Saudi Arabia among the small Zaydi Shia Yemeni tribal population, whose territory spans the Saudi Arabian-Yemeni border, in Najran.

The collapse of UN political talks in Geneva, though unsurprising, signifies that neither side of the current conflict is willing to compromise in order to reach a ceasefire agreement. Continued ISIS attacks will likely elicit a strong military reaction from the al Houthis and will further undermine ongoing attempts to get the al Houthis to relinquish control of some territory.