Al Qaeda in the Arabian Peninsula (AQAP) confirmed that a U.S. airstrike killed its leader and al Qaeda's general manager, Nasser al Wahayshi. Wahayshi's death will probably not significantly affect AQAP's ongoing operations in Yemen, where it has made significant gains exploiting the fight against the al Houthis in the south and a security vacuum in the east. 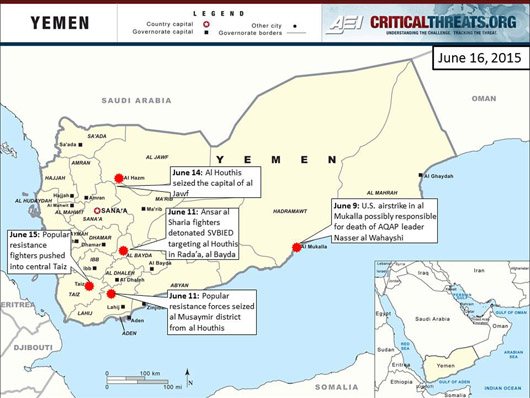 Al Qaeda in the Arabian Peninsula (AQAP) confirmed that a U.S. airstrike killed its leader and al Qaeda’s general manager, Nasser al Wahayshi. Wahayshi’s death will probably not significantly affect AQAP’s ongoing operations in Yemen, where it has made significant gains exploiting the fight against the al Houthis in the south and a security vacuum in the east.

UN-led political talks in Geneva are unlikely to produce a political settlement or ceasefire agreement as long as the parties refuse to compromise from their initial positions. UN Secretary General Ban Ki-moon opened political talks between the al Houthis and Abdu Rabbu Mansour Hadi’s government in Geneva on June 15, although the al Houthis were not present at the opening due to logistical issues in their delegation’s travel arrangements. Ban called for a two-week humanitarian ceasefire during the Islamic holy month of Ramadan, which begins on June 17. Hadi’s Foreign Minister Riyadh Yassin stated that Hadi’s government would consider a ceasefire if the al Houthis withdraw from major cities like Aden and Taiz and release 6,000 prisoners.

Anti-al Houthi popular resistance forces have made minor gains against the al Houthis in southern Yemen. Popular resistance fighters claimed on June 11 to have seized al Musaymir district, Lahij, southern Yemen, after intense fighting with the al Houthis. Anti-al Houthi fighters also reportedly advanced toward the center of Taiz city, while southern fighters claimed to have advanced toward Aden International Airport in southern Yemen. The advances, while minor, may signal an inflection point in the current conflict, where battle lines have remained entrenched for months.

AQAP operations will likely continue apace as the group remains focused on battling the al Houthis and cooperating with local tribes to prevent further al Houthi expansion. The impact of Wahayshi’s death will primarily fall on al Qaeda’s global operations and perhaps in AQAP’s external operations, though its bomb maker, Ibrahim al Asiri, remains at large. AQAP will remain within the al Qaeda network despite the Islamic State in Iraq and al Sham’s (ISIS) expansion in Yemen.