U.S. officials are participating in talks with the al Houthi movement in Oman, marking the first reported direct engagement between the two sides, according to reports. The talks may advance the ongoing political negotiations to resolve Yemen's current crisis. 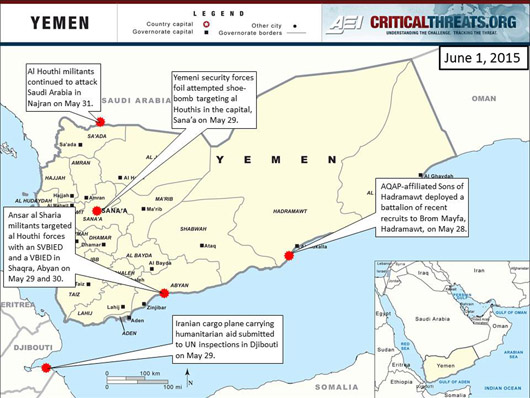 U.S. officials are participating in talks with the al Houthi movement in Oman, marking the first reported direct engagement between the two sides, according to reports. The talks may advance the ongoing political negotiations to resolve Yemen’s current crisis. Security conditions in the country continue to deteriorate as al Qaeda in the Arabian Peninsula (AQAP) and pro-Islamic State in Iraq and al Sham (ISIS) militants exploit the security vacuum. There are also concerns over the status of U.S. citizens held captive by the al Houthis and the status of a Frenchwoman held captive since February.

French officials authenticated a hostage video of French woman held captive in Yemen. French officials authenticated the video depicting French citizen Isabelle Prime, who was kidnapped in the capital, Sana’a, on February 24. Prime appealed to Yemeni President Abdu Rabbu Mansour Hadi and French President Francois Hollande to secure her return to France in the video. No group has claimed credit for her abduction and their demands of the French and Yemeni governments, if any, are unknown. The Yemeni interpreter taken alongside Prime was released shortly after their kidnapping.

Tribal organizations in Hadramawt announced the creation of militia units to defend against al Houthi expansion. A Hadramawt Tribal Alliance (HTA) spokesman announced the formation of four battalions to defend Hadramawt from al Houthi expansion on May 31. The HTA is a coalition of Hadhrami tribes that has taken on a governance role in Hadramawt and has positioned itself against the al Houthis and AQAP. The HTA sought increased autonomy for Hadramawt from the Yemeni central government before the outbreak of the current crisis. The Sons of Hadramawt, an al Mukalla-based group affiliated with AQAP, previously deployed a battalion of recently trained recruits to Brom Mayfa district in Hadramawt on May 28. The Sons of Hadramawt appears to have taken on a policing role in AQAP-controlled territory in Hadramawt, reportedly capturing an alleged drug dealer in Ghayl Bawazir on May 26 and confiscating weapons from an alleged al Houthi-sympathizer in al Mukalla on May 29 (sources available upon request).

Iran is submitting its humanitarian relief shipments to UN inspections in Djibouti, which should deescalate tensions with the United States and Saudi Arabia over the content of Iranian aid shipments. Iran’s Red Crescent Society’s deputy director announced a plane carrying humanitarian aid to Yemen landed in Djibouti on May 29 to undergo UN inspections. The Iran Shahed cargo ship submitted to UN inspections after docking in Djibouti on May 22. Separately, al Houthi militants reportedly fired at a UN-chartered ship carrying humanitarian relief and prevented the ship from docking in Aden city, Aden, on May 31. The ship diverted its course to al Hudaydah port along the Red Sea coastline.

Negotiations between U.S. officials and the al Houthi movement may help to jumpstart talks between the al Houthi movement and Hadi’s government in coming weeks. The ongoing Yemen conflict has given AQAP the freedom to operate openly in eastern Yemen and has created space for the emergence of pro-ISIS cells in the country. The formation of HTA units to protect Hadramawt could limit AQAP’s growth there, but may also serve as an obstacle to the eventual re-integration of Hadramawt into a central Yemeni state in the future.