Anti-al Houthi forces, backed by the Saudi Arabian-led coalition under "Operation Golden Arrow," have expanded areas of control north of Aden city. The rumored withdrawal of former president Ali Abdullah Saleh from the al Houthis would compound the effect of the current offensive against the al Houthis, who rely in part on forces loyal to Saleh. 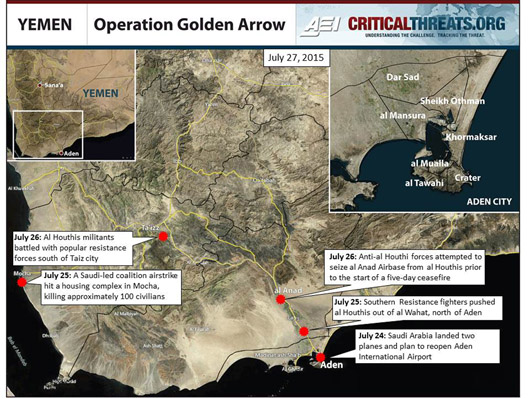 Anti-al Houthi forces, backed by the Saudi Arabian-led coalition under "Operation Golden Arrow," have expanded areas of control north of Aden city. The rumored withdrawal of former president Ali Abdullah Saleh from the al Houthis would compound the effect of the current offensive against the al Houthis, who rely in part on forces loyal to Saleh.

The withdrawal of Saleh's support would probably lead the al Houthis to consolidate forces farther north to prevent being overstretched across south and central Yemen. Representatives from the General People's Congress, Yemen's ruling party still headed by Saleh, are reportedly in negotiations with U.S., British, and UAE diplomats to  find a solution to Yemen’s current conflict. Unverified reports indicate that military officers loyal to Saleh who were fighting alongside the al Houthis are now refusing to fight in Aden and Taiz.

A unilateral Saudi Arabia-proposed ceasefire broke down less than twenty-four hours after it began. Saudi Arabia-led coalition forces announced on July 26 a five-day humanitarian ceasefire in Yemen, but the al Houthis rejected the ceasefire, claiming the UN did not inform them about it. The al Houthis continued to conduct attacks after the ceasefire began in Aden, Ma’rib, and near the Saudi border. Saudi Arabia resumed airstrikes targeting territory surrounding al Anad Airbase on July 27. Saudi-led coalition airstrikes also hit a housing complex in the port city of Mocha on July 25, killing over 60 civilians.

Aden’s liberation appears to have invigorated Islamic State in Iraq and al Sham (ISIS) Wilayat Aden. Pro-ISIS Twitter accounts posted on July 25 a photo series of ISIS Wilayat Aden fighters training at the al Shaikhain training camp in Aden. (Source available upon request.) It is unclear when and where in Aden the photos were taken. ISIS Wilayat Aden most recently claimed an attack on the al Houthis on July 18. Separately, ISIS Wilayat Hadramawt militants posted via Twitter on July 26 photos of militants setting up anti-aircraft weapons in an unidentified location in Hadramawt.

AQAP is refusing to leave al Mukalla, Hadramawt, despite demands for the group to do so. A local AQAP fighter Omar al Nahdi told a crowd during a July 24 demonstration against AQAP’s presence in al Mukalla that AQAP will not abandon Hadramawt and will stay to protect the governorate from the al Houthis. AQAP seized al Mukalla on April 2 and established a council with local tribes to oversee governance in the city. Previous reports indicated that AQAP was negotiating with local tribes in al Mukalla to withdraw from the city and establish a security force. There has been discontent with AQAP’s governing tactics among the local population within the city.

The anti-al Houthi resistance forces’ offensive seems to be stalling slightly as the al Houthis remain entrenched in north-central seized territory. ISIS groups will likely seek to exploit the conflict and carry out more attacks on al Houthi militants in Aden and Lahij. AQAP will continue its policy of working among local populations to battle the al Houthis.