Anti-al Houthi fighters now have the momentum and are continuing to take territory from the al Houthis. Yemeni President Abdu Rabbu Mansour Hadi is attempting to establish a government based in Aden, which is now held by anti-al Houthi forces, but support for his government is minimal among southern fighters. 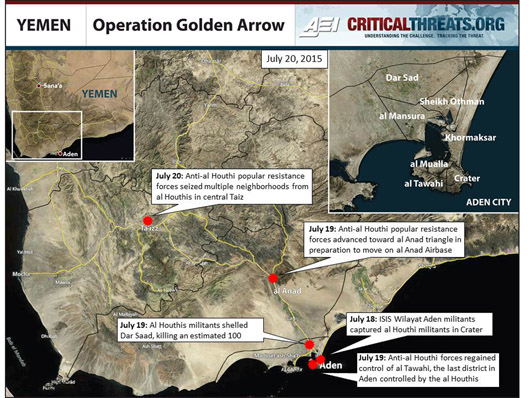 Anti-al Houthi fighters now have the momentum and are continuing to take territory from the al Houthis. Yemeni President Abdu Rabbu Mansour Hadi is attempting to establish a government based in Aden, which is now held by anti-al Houthi forces, but support for his government is minimal among southern fighters.

Anti-al Houthi forces, with the support of Saudi-led Operation Golden Arrow, are making significant gains against the al Houthis in southern Yemen. Southern Resistance fighters retook the last district held by the al Houthis in Aden, al Tawahi, on July 20. The push for al Tawahi began in earnest on July 19, and al Houthi militants responded to losses there by shelling the town of Dar Saad, north of Aden, killing at least 43. Anti-al Houthi forces also seized Labuza base in Lahij governorate, north of Aden, and the 117th Mechanized Brigade headquarters in Shabwah to the east. Resistance forces are reportedly planning to retake al Anad airbase in Lahij and have seized territory north of the base in preparation.

The liberation of Aden appears to be setting off renewed calls for southern independence. The Supreme Council of the Revolutionary Movement for Peaceful Liberation and Southern Independence, a faction of Yemen’s Southern Movement, called for an international force to monitor the border between northern and southern Yemen. Separately, some members of Abdu Rabbu Mansour Hadi’s government returned to Aden on July 17 under the protection of Saudi Arabian Special Forces. Hadi appointed Nayef al Bakri, the head of the southern Resistance Council, as the new governor of Aden. Al Bakri previously served as deputy to Aden’s former governor. Al Bakri’s appointment is likely an attempt to appease southern secessionists in Aden, although it is unlikely that hardline factions of the movement will welcome Hadi’s government in Aden. The recent success of pro-secession Southern Resistance forces in liberating Aden may give secessionists momentum to push for independence, though the highly fractured nature of the Southern Movement serves as an impediment to a coordinated call for an independent southern Yemeni state.

Former Yemeni President Ali Abdullah Saleh may be considering withdrawing essential military support to the al Houthis. Saleh is reportedly negotiating with Emiratis officials for the lifting of sanctions on him and his family and for refuge in the UAE in return for removing his support for the al Houthis. Such a loss, especially from military units loyal to Saleh, would be a significant setback to the al Houthis’ military capabilities and may force the al Houthis to retreat northward. The al Houthis may also lose support from Saleh’s political party, the General People’s Congress, should Saleh turn on the al Houthis.

The Islamic State in Iraq and al Sham (ISIS) may be attempting to exploit the success of Operation Golden Arrow in Aden. ISIS Wilayat Aden militants claimed credit for a July 18 operation in which militants ambushed and kidnapped a number of al Houthi fighters in Aden’s central Crater district. (Statement obtained and translated by SITE.) ISIS’s activity in Aden has been limited to a few claimed executions of al Houthis in April. (Source available upon request). Overall, ISIS has been less active in Yemen in recent weeks.

Al Qaeda in the Arabian Peninsula (AQAP) may be preparing to withdraw from al Mukalla, the capital of Hadramawt. Unconfirmed reporting from July 18 indicated that AQAP militants are negotiating with the Hadramawt People’s Council (HPC) to withdraw from al Mukalla. HPC is a governing body established by Hadhrami tribes in cooperation with AQAP to oversee governance in al Mukalla following AQAP’s April 2 takeover. Hadhrami tribes are calling for AQAP’s withdrawal due to the number of U.S. airstrikes that have recently targeted AQAP militants in the city, according to reports. The HPC is currently negotiating with AQAP to establish a security force within the city, although the HPC has given no official statement to confirm the rumors. AQAP will likely still have a strong presence within the security force established by the HPC, even if its fighters withdraw from the city.

Iran is continuing its activities in Yemen. Tehran appointed former Islamic Revolutionary Guard Corps (IRGC) officer and Law Enforcement Forces commander Brigadier General Esmail Ahmadi Moghaddam as the head of Iran’s “Headquarters to Support the Yemeni People.” Moghaddam is sanctioned by the U.S. and the EU for his roles in the 2009 crackdown on the Green Movement and helping Bashar al Assad in Syria, among others. His appointment to head Iran’s humanitarian effort in Yemen is probably a guise for the regime continuing to support the al Houthis.