Abdu Rabbu Mansour Hadi, who resigned as Yemen's president on January 22, rescinded his resignation and appears to be establishing an alternative government in Aden. The al Houthis continue to control Yemen's central government in Sana'a and the majority of the northern governorates. 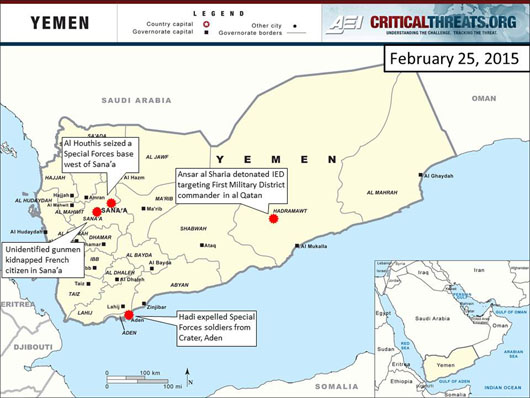 Abdu Rabbu Mansour Hadi, who resigned as Yemen’s president on January 22, rescinded his resignation and appears to be establishing an alternative government in Aden. The al Houthis continue to control Yemen’s central government in Sana’a and the majority of the northern governorates.

The al Houthis continue to govern northern Yemen through their Revolutionary Committee. The Revolutionary Committee, which the al Houthis say is the legitimate governing body in Yemen, attempted to force resigned cabinet members to return to work as part of a caretaker government earlier this week, but ministers refused to give into al Houthi pressure. The al Houthis also stated that Hadi has lost all legitimacy to act as president and that he is now wanted as a fugitive. Members of the General People’s Congress (GPC) party supported the al Houthis, claiming the GPC-controlled parliament must reject Hadi’s initial resignation before he can rescind it. Former president Ali Abdullah Saleh, who facilitated the al Houthi takeover, is the head of the GPC, though there is a GPC faction loyal to Hadi as well.

Al Houthi militias took over a Special Forces base west of Sana’a. Al Houthi militants seized a Special Forces camp in al Sabahah, directly west of the capital, Sana’a, on February 24. The units stationed at the camp were counter-terrorism forces trained by the U.S. during the rule of former President Saleh.

Yemen’s security situation continues to deteriorate. Al Qaeda in the Arabian Peninsula’s (AQAP) insurgent arm, Ansar al Sharia, ambushed the convoy of the commander of the First Military District in al Qatan, Hadramawt on February 23, killing one soldier, and AQAP held a public forum in Bayhan, Shabwah at the military base Ansar al Sharia seized on February 12. Unidentified militants kidnapped a French female citizen, her translator, and driver on February 24 in the capital, Sana’a. The French woman was working for a consulting firm.

The international community supports Hadi as the legitimate president and condemns the al Houthis’ actions. The Gulf Cooperation Council (GCC) praised Hadi’s escape to Aden. Additionally, the UN Security Council renewed financial sanctions on Saleh and two al Houthi leaders. A UN Panel of Experts report asserted that Saleh had amassed between $32 and $60 billion during his presidency.