Yemen's political factions remain at odds with the al Houthis, who continue to control the central government, despite reaching a preliminary deal. 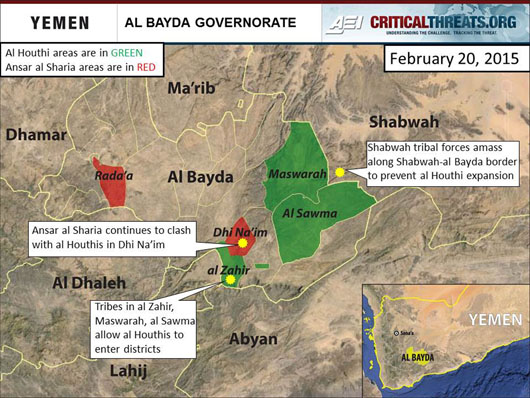 Yemen’s political factions remain at odds with the al Houthis, who continue to control the central government, despite reaching a preliminary deal. Weeks of tense negotiations between al Houthis and political actors resulted in an initial deal to create a new national transition council that will include underrepresented factions of the population. Regional powerbrokers outside of Sana’a will probably continue to pursue autonomy.

Yemeni political actors agreed on an initial deal to form a new legislative body. UN Special Envoy to Yemen Jamal Benomar announced on February 20 that Yemen’s political parties and the al Houthis have agreed to form a transitional council as part of a bicameral legislature, preserving Yemen’s 301-member parliament. The new transitional council, which will have 250 members, will have 50 percent of seats allocated to representatives from the South, 30 percent to women, and 20 percent to youth to balance the General People’s Congress parliamentary majority. An al Houthi spokesman confirmed reaching the deal. No agreement was reached on filling the presidency and premiership, however.

Shabwah and Hadhrami tribes gathered fighters to prevent al Houthi expansion. Local tribes in Shabwah led by the Awalek tribe announced the assembly of 3,000 fighters and the beginning of armed patrols to protect the governorate. A separate tribal force sent fighters to Markhah, along the al Bayda-Shabwah border, in an effort to close the border. The tribes rejected al Houthi control of the central government and the continued house arrest of President Abdu Rabbu Mansour Hadi. Tribes from Hadramawt announced that they will form a coordinating security committee with tribes and security forces in Shabwah after a meeting on February 17. Both announcements were in response to the al Houthis’ gains in southern al Bayda near the Shabwah and Abyan borders.

Continued al Houthi expansion farther south in Yemen and control of the central government will anger tribes in southern and eastern governorates. AQAP may try to exploit this popular resentment to expand its presence in these regions.