A group of political leaders announced they would seek to establish an alternative capital in Aden or Taiz should the al Houthis continue to control the Sana'a-based central government. 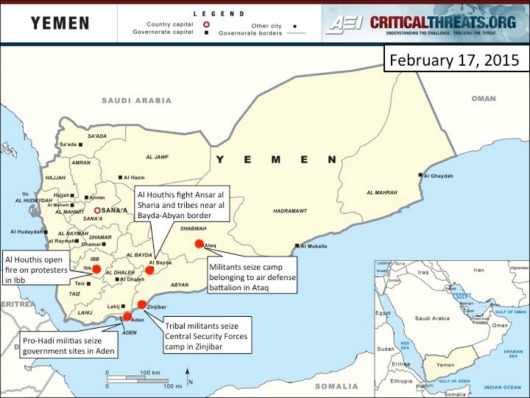 A group of political leaders announced they would seek to establish an alternative capital in Aden or Taiz should the al Houthis continue to control the Sana’a-based central government.

Southern political leaders called for the establishment of an alternative capital in Taiz or Aden. Southern political leaders met in Aden on February 15 and called the al Houthi control of the central government an occupation. A 16-point statement outlined their concerns and threatened the establishment of an alternative capital in Aden or Taiz if the al Houthis do not withdraw from the government. Local militias known as popular committees that are loyal to Nasser, the brother of recently resigned President Abdu Rabbu Mansour Hadi, clashed with Special Security Forces (SSF), formerly known as the Central Security Forces (CSF), in Aden on February 15. The SSF commander in Aden, Abdul Hafiz al Saqqaf, is reportedly an al Houthi loyalist. An SSF attempt to dissolve the popular committees, which are anti-al Houthi, sparked the fighting.

The Yemeni military lost control of two military camps to tribal forces. Tribal forces seized the Central Security Forces (CSF) camp in Zinjibar, Abyan on February 15, reportedly without resistance. Militants also took control of an air defense battalion headquarters in Ataq, Shabwah on February 15. It is unclear whether the gunmen were tribal militants or al Qaeda in the Arabian Peninsula (AQAP) fighters.

A UN Security Council resolution demanded that the al Houthis withdraw from the Yemeni central government immediately and unconditionally. The resolution, adopted unanimously, also called for an end to foreign interference in Yemen and threatened further action if violence continues The Gulf Cooperation Council (GCC) urged the UN Security Council to adopt a resolution under Chapter 7 of the UN Charter, which would allow for the use of military force. The first statement from the al Houthis’ new 15-member Supreme Revolutionary Committee, which is tasked with overseeing governance and establishing a new parliamentary body, condemned the UN resolution and the GCC’s interference in Yemen.

Large portions of the Yemeni population continue to reject al Houthi control. Thousands of Yemenis demonstrated in Sana’a and Taiz on February 14 against continued al Houthi control of the government. Al Houthis fired on protesters in Ibb, wounding four. Protesters have also been angered by physical signs of torture on activists who were detained by al Houthis.

The loss of key military sites in south and east Yemen indicates the Yemeni military may lack the ability and will to combat AQAP. AQAP will capitalize on continued unrest and anti-al Houthi sentiments to expand in southern governorates.