Al Qaeda in the Arabian Peninsula (AQAP) carried out a successful attack against one of the largest military installations in southern Yemen and reportedly stole weapons and materiel before turning control over to local tribesmen. The Yemeni military does not currently have control of the base. 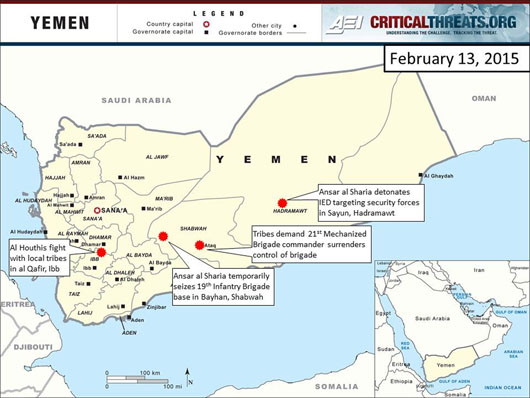 Al Qaeda in the Arabian Peninsula (AQAP) carried out a successful attack against one of the largest military installations in southern Yemen and reportedly stole weapons and materiel before turning control over to local tribesmen. The Yemeni military does not currently have control of the base.

AQAP’s insurgent arm Ansar al Sharia temporarily seized one of the largest military bases in southern Yemen on February 12. Ansar al Sharia militants detonated a suicide vehicle-borne improvised explosive device outside the 19th Infantry Brigade base in Bayhan, Shabwah before storming the base. The brigade commander and soldiers reportedly surrendered to militants during the attack. Ansar al Sharia took a number of weapons from the base and turned control of it over to local tribes after negotiations for the release of hostages. AQAP has conducted these sorts of attacks against Yemeni military bases before, but the Yemeni military had regained control of the bases.

The closure of the U.S. embassy in Sana’a has significantly affected U.S. intelligence gathering capabilities. The U.S. Central Intelligence Agency (CIA) recalled senior officers who were working with Yemeni intelligence organizations to combat AQAP. Anonymous CIA officials confirmed that intelligence relationships have been suspended temporarily. The U.S. embassy closure also set off a string of embassy closures. Saudi Arabia, Germany, and Italy evacuated all embassy staff from Yemen on February 13. The al Houthis criticized the closures as “unjustified.”

Tribes in Ma’rib and Shabwah are attempting to take control of territory from the Yemeni military. Tribes in Shabwah told the commander of the 21st Mechanized Brigade stationed in Ataq to hand over the brigade to their control. The demand seems to be a reaction to the February 12 attack on the 19th Infantry Brigade in Bayhan. Tribes in Ma’rib took control of a military checkpoint in Harib, Ma’rib, east of Sana’a. Soldiers stationed at the checkpoints surrendered their weapons to the tribes.

The al Houthi Revolutionary Committee is overseeing the creation of a new parliamentary body. Some members of the former parliament began signing up for the newly created National Transition Council (NTC), which will replace Yemen’s parliamentary body. Most of those who registered for the NTC were from the General People’s Congress (GPC). Joint Meeting Parties (JMP) and Islah (Reform) party members refused to join the new council.

UN-brokered negotiations with al Houthis make little progress. The UN Special Envoy to Yemen Jamal Benomar warned that Yemen stands at a crossroad between “civil war and disintegration” or a successful transition on February 12. Benomar added that the Yemeni riyal is at serious risk of collapsing without a political settlement. Predictions show the government will be unable to pay civil salaries in the next two to three months.

The reduced U.S. presence in Yemen and decreased capabilities to gather intelligence will likely ease pressure on AQAP and give militants more operating room in southern and eastern Yemen. U.S. counter-terrorism cooperation with the Yemeni military will likely be significantly undermined as a result of the U.S. drawdown.