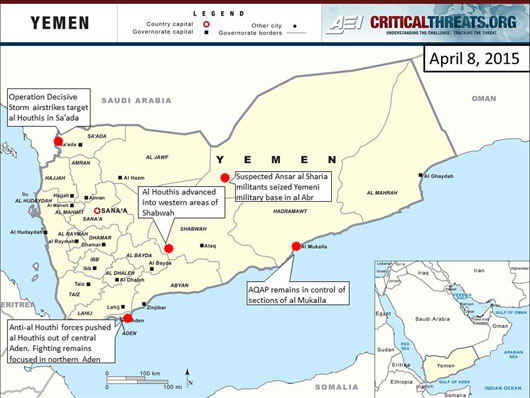 AQAP continues to exploit the Yemen crisis and expand in Yemen’s eastern governorates. U.S. Secretary of Defense Ashton Carter stated that the collapse of Yemen’s central government has undermined U.S. counterterrorism efforts and that AQAP is taking advantage of the current situation to expand and seize territory. Secretary Carter also warned that AQAP still seeks to attack the United States. Militants from AQAP’s insurgent arm, Ansar al Sharia, seized the 23rd Mechanized Brigade’s military camp in al Abr, Hadramawt, 80 miles south of the Saudi Arabian border, on April 7.  It is unclear whether Ansar al Sharia remains in control of the camp. According to local sources, Ansar al Sharia still controls sections of al Mukalla, the capital of Hadramawt, which it seized on April 2. Hadhrami tribes deployed to retake the city on April 5 but have so far failed to secure the entire city from AQAP. The tribes have also denied rumors they signed an agreement with AQAP. No reported airstrikes from the Saudi-led Operation Decisive Storm have targeted AQAP in al Mukalla.

Iran is working to help form a unity government in Yemen while also establishing its naval presence off of Yemen’s coast. Iranian Deputy Foreign Minister Morteza Sarmadi called for the formation of a unity government in Yemen and stated that Iran is helping to reach a political solution. Iran deployed two warships to the Gulf of Aden on April 8, which Rear Admiral Habibollah Sayyari stated were meant to protect Iranian shipping from piracy. Saudi Arabia and Egypt established a naval presence in the Gulf of Aden as part of Operation Decisive Storm. Iranian Supreme Leader Ayatollah Ali Khamenei stated that Iran opposes foreign interference in Yemen and that Yemenis should decide their own future. Khamenei and Iranian President Hassan Rouhani also called on Saudi Arabia to end its military campaign in Yemen.

Former Yemeni President Ali Abdullah Saleh is rumored to have fled Yemen. Abdu Rabbu Mansour Hadi’s Foreign Minister, Riyadh Yassin, alleged that Saleh fled Yemen earlier this week on a Russian plane. Saleh’s current whereabouts are unknown. He has directed some of his military loyalists in Yemen to work with the al Houthis and facilitate military activities. Yassin also alleged that the United Arab Emirates (UAE) is considering lifting the diplomatic immunity of Saleh’s son, Ahmed Ali Abdullah Saleh, who is Yemen’s ambassador to the UAE.  Yassin’s allegations, however, could not be independently verified. Ahmed Saleh previously offered Saudi Arabia to end his support for the al Houthis in return for immunity for both him and his father but was rebuked.

Saudi Arabia is pressing Pakistan to join the Operation Decisive Storm coalition. Saudi Arabian Defense Minister Khawaja Asif announced on April 6 that Saudi Arabia had formally asked Pakistan to join the Saudi-led coalition against the al Houthis and to contribute combat planes, warships, and soldiers. Pakistani Prime Minister Nawaz Sharif called on Iran to join the discussion regarding Yemen. Pakistan’s parliament is currently debating whether to join the coalition. Turkish President Recep Tayyip Erdogan received a Saudi delegation, including the Deputy Crown Prince and Interior Minister Mohammed bin Nayef, in Ankara on April 6 ahead of a meeting with his Iranian counterpart in Tehran on April 7. Separately, U.S. Deputy Secretary of State Antony Blinken confirmed that the U.S. is accelerating supplying arms to and increasing intelligence sharing with the Operation Decisive Storm coalition. Blinken added that the U.S. has also established a joint coordination planning cell with Saudi Arabia for the operation.

The focus on the military campaign against the al Houthis has distracted from the fight against AQAP. AQAP will likely continue to seize and consolidate territory in Yemen’s eastern governorates. It remains to be seen if Yemen’s military, which has been weakened by Yemen’s crisis, will be able to prevent AQAP from taking more territory.