The al Houthis and allied forces have advanced into central Aden and have solidified control over northern sections of the city, cutting off residents and anti-al Houthi forces from access to the rest of Yemen. Al Qaeda in the Arabian Peninsula (AQAP) appears to remain in control of parts of al Mukalla as tribal forces mobilize to try to retake the city. 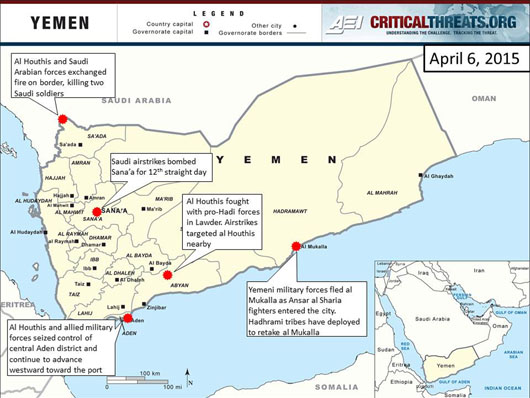 The al Houthis and allied forces have advanced into central Aden and have solidified control over northern sections of the city, isolating residents and anti-al Houthi forces there from the rest of Yemen. Al Qaeda in the Arabian Peninsula (AQAP) appears to remain in control of parts of al Mukalla as tribal forces mobilize to try to retake the city after Yemeni security forces left.

AQAP may still control parts of al Mukalla, the capital of Hadramawt governorate. AQAP had seized control of the city on April 2 and freed at least one senior operative from the central prison. A number of Yemeni military and security forces in al Mukalla fled the city after the attack. The Hadramawt Tribal Alliance sent a tribal militia to al Mukalla on April 5, reportedly forcing AQAP fighters out of the eastern sections of the city. That claim is contested, however, with local sources reporting AQAP remains in control of al Mukalla.

Al Houthis continue to clash with Saudi Arabian forces along Yemeni-Saudi border. Two Saudi soldiers were killed during an exchange of fire on April 4 in the Asir region along the Yemeni-Saudi border, where the al Houthis killed a Saudi soldier three days earlier. Operation Decisive Storm fighter jets bombed al Houthi military sites in al Malahaidh and Ghamr in Sa’ada on April 4.

An al Houthi political leader signaled the group would participate in talks when airstrikes stop. A mid-level al Houthi political leader, Saleh al Simad, stated that the al Houthis are willing to negotiate with the condition that coalition airstrikes cease. It is unclear whether al Houthi leadership sanctioned al Simad’s public statements. There is an apparent division between the al Houthis’ military wing and its political wing, which may be more moderate. Separately, the al Houthis arrested over a hundred members of the Sunni Islamist al Islah (Reform) party, including two of the party’s leaders, on April 4. Al Islah previously declared its support Operation Decisive Storm.

The conflict in Yemen is exacerbating a humanitarian crisis. The International Committee of the Red Cross (ICRC) faces logistical problems of landing a plane in Yemen to deliver essential medical supplies and relief workers. The ICRC called for a 24-hour ceasefire to allow humanitarian aid to reach Aden residents who have been cut off from water and food due to the ongoing fighting. The ceasefire was not granted. Saudi Arabia military spokesman Ahmed al Asiri stated that coalition forces are allowing humanitarian and evacuation work and denied that coalition forces were preventing relief work. Russia submitted a draft resolution calling for a humanitarian ceasefire on April 4 to the UN Security Council. Saudi Arabia’s permanent representative to the UN dismissed Russia’s resolution and stated that Russia was trying to hinder a separate resolution Gulf States and Jordan have submitted to the council. A draft resolution from the Gulf States seeks to impose an arms embargo on groups spoiling the peace; Russia reportedly would like to see the embargo in effect for the entire country.

Saudi Arabia and allied coalition forces will likely focus their efforts on securing Aden and pushing al Houthis out of the port. The fighting in Aden will probably continue to distract from the fight against AQAP and emerging Islamic State in Iraq and al Sham (ISIS) cells in Yemen, increasing the operating room for both groups.