Al Houthis continue to expand in south Yemen and temporarily gained control of most of Aden city despite coalition airstrikes. Al Qaeda in the Arabian Peninsula (AQAP) is beginning to take advantage of the chaos and seized a city on Yemen's southern coast, freeing an estimated 270 inmates from a local prison. 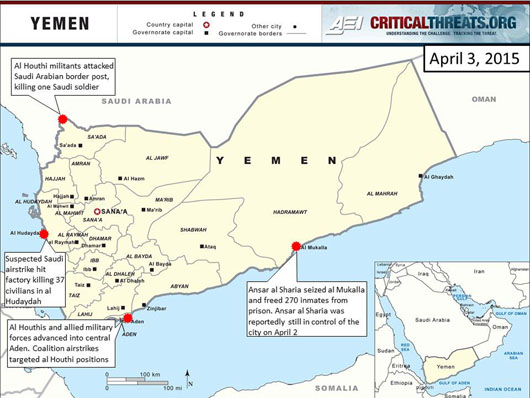 Al Houthis continue to expand in south Yemen and temporarily gained control of most of Aden city despite coalition airstrikes. Al Qaeda in the Arabian Peninsula (AQAP) is beginning to take advantage of the chaos and seized a city on Yemen’s southern coast, freeing an estimated 270 inmates from a local prison.

Al Houthis advanced into central Aden and temporarily seized the presidential palace in the city despite continued bombardment from Operation Decisive Storm airstrikes. Al Houthis and allied military forces appeared to be in control of most of Aden city on April 2 as they seized control of Aden’s northern Khormaksar district. The Houthis also initially seized Aden’s Crater district, but were reportedly forced back by militias loyal to Abdu Rabbu Mansour Hadi on April 3.The al Houthis temporarily seized the presidential palace in the city on April 2, but coalition jets reportedly bombed the complex and conducted three additional strikes in northern areas of the city. It is unknown who, if anyone, controls the presidential palace now.  Saudi Arabia denied it had sent “formal” ground troops to Yemen despite rumors that foreign troops landed in Aden on April 2. Saudi Arabia’s Ambassador to the U.S. stated that the use of ground troops is still an option.

AQAP seized al Mukalla, Hadramawt. AQAP’s insurgent arm, Ansar al Sharia, attacked government and security facilities in al Mukalla, Hadramawt, on Yemen’s southern coast, early in the morning on April 2. Militants also attacked a prison and freed an estimated 270 inmates, including AQAP’s former Emir of Abyan province, Khaled Batarfi. Militants established a number of checkpoints throughout al Mukalla and were reportedly still in control of the city as of April 2. Yemeni military units have not deployed to retake al Mukalla, though local sources are reporting that the Hadramawt Tribal Alliance will move to recapture the city.

Neither Saudi Arabia nor the al Houthis are ready to come to the negotiating table. Oman’s Foreign Minister Yusuf bin Alawi stated that Oman had passed messages between the al Houthis and Saudi Arabia, but that neither had sought contact with the other since the beginning of Operation Decisive Storm on March 26. Alawi also affirmed that Oman is prepared to help both sides negotiate should they decide to hold talks. Oman is the only Gulf Arab nation not participating in Operation Decisive Storm.

U.S. official alleged Yemen’s chaos has disrupted AQAP’s external plots. An anonymous U.S. official told Reuters that evidence indicates that the al Houthis’ advance in Yemen has sidelined AQAP’s external operations as the militant group figures out how to confront current events. Previously, AQAP sustained its external operations planning while also fighting an insurgency in south Yemen in 2012. Separately, U.S. Central Commanded received authorization to provide Saudi Arabia and coalition partners aerial refueling in the ongoing Operation Decisive Storm. The first American citizen has also been killed in Yemen’s ongoing crisis. Shelling in Aden killed a 40-year-old Yemeni-American on April 2. The U.S. continues to assert that it will not evacuate U.S. citizens from Yemen at this point.

Pakistan is considering whether to join Operation Decisive Storm. Pakistan’s Prime Minister Nawaz Sharif stated that it will extend its support to help defend Saudi Arabia’s territorial integrity. Pakistan’s parliament is set to consider on April 6 a plan to join the Saudi-led military coalition in Yemen. Separately, Turkey has called for a political solution to the Yemen crisis but stated it also supports Operation Decisive Storm.

AQAP’s ability to seize and hold a large city has currently been met with little to no response from the Yemeni military. AQAP may try to continue consolidating territory in Yemen’s southern and eastern governorates as Yemen’s ongoing conflict distracts from the fight against AQAP. AQAP previously benefited from unrest in 2011 and establish control over strategic territory in southern Yemen.