Al Qaeda in the Arabian Peninsula (AQAP) continues to benefit from Yemen's crisis and remains in control of territory in southern Hadramawt. Some local populations, however, are protesting AQAP's presence in the region. Nevertheless, AQAP is able to use the al Houthis' military expansion in central Yemen as a means to cooperate with local tribes and maintain its operational reach. 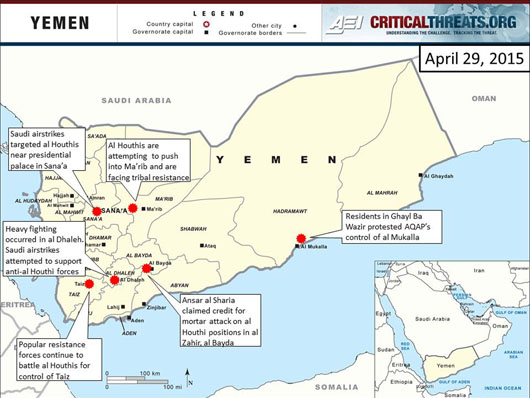 Al Qaeda in the Arabian Peninsula (AQAP) continues to benefit from Yemen’s crisis and remains in control of territory in southern Hadramawt. Some local populations, however, are protesting AQAP’s presence in the region. Nevertheless, AQAP is able to use the al Houthis’ military expansion in central Yemen as a means to cooperate with local tribes and maintain its operational reach.

Local resistance to AQAP’s control of al Mukalla and presence in Hadramawt is beginning to emerge. Residents of Ghayl Ba Wazir, east of al Mukalla, protested AQAP’s continued control over al Mukalla on April 24. AQAP also reportedly held a meeting in al Shihr, east of al Mukalla, to discuss its presence in the area. AQAP is cooperating with some local tribes in al Mukalla city and in Hadramawt despite the protests. A local AQAP leader said the group seeks to protect Hadramawt from an al Houthi incursion and called on citizens to resist the al Houthis. AQAP also announced the payment of civil servant salaries for the month of April in al Mukalla. The Hadramawt Tribal Alliance announced recruitment efforts to build up a larger force in order to combat any al Houthi incursion into the governorate. Reporting from early April indicated that the alliance was opposed to AQAP.

AQAP declared it is at war with the al Houthis and highlighted its operations in al Bayda governorate in central Yemen. AQAP’s insurgent arm, Ansar al Sharia, released a twenty-minute video detailing its operations against the al Houthis and Yemeni military in al Bayda governorate (source available upon request). The video depicts Ansar al Sharia in al Bayda as well as ground and suicide vehicle-borne improvised explosive device (SVBIED) attacks and executions of al Houthis. The video also features a shot of an AQAP “Wilayat al Bayda” logo. AQAP has been battling the al Houthis and allied Yemeni military units in al Bayda since September 2014. It has sought to establish itself with the local tribes as the only force capable of combatting al Houthi expansion.

The battle line between al Houthi forces and their opponents remains fixed, though fighting continues throughout central and southern Yemen. Anti-al Houthi fighters, known as “popular resistance” forces, continued to clash with al Houthi forces in Yemen’s third-largest city, Taiz, in central Yemen. Popular resistance forces also continued fighting al Houthis in Ma’rib, al Dhaleh, and Aden and are receiving support from Saudi-led coalition airstrikes. Popular resistance forces appear to be loosely-aligned, anti-al Houthi ground and tribal forces and are not operating under a unified command. They have been unable to wrest control of significant territory from the al Houthis despite the aid of coalition airstrikes.

Iran will maintain a naval presence in the Gulf of Aden for several more months. Iran’s Artesh Navy Commander Rear Admiral Habibollah Sayyari announced on April 26 that Iran may send the Artesh’s 35th and 36th fleets of warships to the Gulf of Aden after the 34th flotilla returns. Sayyari also stated that the ships are meant to protect shipping routes. Two days earlier, a flotilla of nine Iranian naval and cargo ships feared to be carrying arms to al Houthis changed route and appeared to sail back toward Iran. Separately, an Iranian plane attempted to enter Yemeni airspace on April 28 but was forced to turn back. Operation Restoring Hope fighter jets bombed Sana’a Airport’s runway to prevent any possible landing. This is the third attempt by Iran to violate Operation Restoring Hope’s no-fly zone.

No political solution appears to be in sight as Yemen’s humanitarian crisis deepens. Former UN Special Envoy to Yemen Jamal Benomar confirmed rumors that the Yemeni stakeholders were close to reaching a political power-sharing agreement prior to the start of Saudi-led airstrikes. He suggested that the start of the Saudi-led Operation Decisive Storm derailed progress toward a negotiated political settlement. Separately, international relief officials stated that essential aid and food deliveries are being held up by both the al Houthis and coalition navies searching ships before being permitted to enter Yemen. Fuel is now scarce, increasing the challenge of delivering aid to Yemenis over land.

The battle between al Houthi and anti-al Houthi forces appears to have stalemated with neither side able to gain an upper hand over the other. Fighting will likely continue with the al Houthis focusing on pushing into Ma’rib, east of Sana’a, and maintaining control over north-central Yemen. AQAP will continue to build off of anti-al Houthi sentiments in southern and eastern Yemen to shape its operational environment and cooperate with local populations.