Saudi Arabia and coalition members announced the end of "Operation Decisive Storm" and the beginning of "Operation Restoring Hope" in Yemen, noting initial objectives had been achieved. 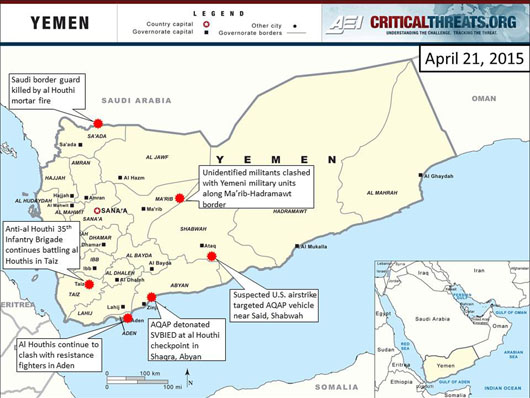 Saudi Arabia and coalition members announced the end of “Operation Decisive Storm” and the beginning of “Operation Restoring Hope” in Yemen, noting initial objectives had been achieved. Former Yemeni President Ali Abdullah Saleh, who has been instrumental in facilitating the al Houthis’ military advance, may be distancing himself from the al Houthis and attempting to negotiate a deal with Saudi Arabia. The potential withdrawal of Saleh’s support could significantly undermine the al Houthis’ ability to hold seized territory.

The Saudi Press Agency issued a statement announcing the start of Operation Restoring Hope in Yemen. The operation's objectives are to facilitate the political process in accordance with UN Security Council Resolution 2216, to protect civilians, fight terrorism, facilitate foreign national evacuation and international humanitarian relief efforts, respond to al Houthi military actions and prevent the use of looted weapons, and to build on ongoing efforts to interdict weapons shipments to the al Houthis and to Saleh. Saudi Arabia also announced it would provide $274 million to the UN for humanitarian relief operations in Yemen. The official end to Operation Decisive Storm may have been because of its growing unpopularity in Yemen due to civilian casualties. An April 20 airstrike targeting a suspected Scud missile base in Faj Attan, western Sana’a, killed at least 46 people, including some civilians, on April 20. The U.S. has attempted to restrain Saudi-led airstrikes on Yemen. Separately, Iran’s Deputy Foreign Minister Hossein Amir Abdollahian stated he is “optimistic” a ceasefire will be declared soon in Yemen, although separate reporting indicates that a ceasefire has not been agreed.

Saleh may be trying to turn against the al Houthis. Saleh denied in an April 19 interview any alliance or military coordination with the al Houthis and stated he has not interfered with army or security forces since 2012. Saleh’s political party, the General People’s Congress (GPC), stated it would accept a ceasefire throughout the country in return for dialogue. An anonymous Yemeni official also stated that the GPC has made peace proposals to Abdu Rabbu Mansour Hadi’s exiled government. Saleh loyalists within the Yemeni military provide significant backing to the al Houthis that may disappear should Saleh withdraw his support.

Iran and the U.S. both deployed warships to the Gulf of Aden. Anonymous U.S. defense officials stated that Iran has sent seven to nine ships toward Yemen and alleged that some ships were carrying weapons to resupply the al Houthis. Earlier this month, the Iranian Navy announced it had sent its 34th Fleet to the Gulf of Aden and Bab al Mandeb Strait for counter-piracy operations. The U.S. sent aircraft carrier USS Theodore Roosevelt and guided-missile cruiser the USS Normandy to the Gulf of Aden on April 20 to join ten other U.S. warships currently stationed there. Pentagon Spokesman Col. Steven Warren stated the ships were not deployed to intercept other ships. Separately, the Huffington Post reported that Iranian advisors discouraged al Houthis from seizing the capital, Sana’a, in September. The fact that the al Houthis ignored Iranian advice confirms that Tehran does not exert command and control over the militant group.

The al Houthi leader vowed to continue resisting military pressure from Operation Decisive Storm. Al Houthi leader Abdul Malik al Houthi stated in an April 19 televised address that al Houthi fighters would not evacuate from cities or government institutions. Al Houthi fighters continued over the weekend to clash with anti-al Houthi militias through central and southern territory in al Dhaleh, Abyan, Aden, al Bayda, and Taiz. Anti-al Houthi militias in these areas, known as “popular resistance forces,” have been unsuccessful in driving al Houthis out of central and southern Yemen.