Al Qaeda in the Arabian Peninsula (AQAP) is partnering with local tribes in Yemen's eastern Hadramawt governorate to seize and consolidate territory. The Yemeni military has been unable to staunch the militants' advance. 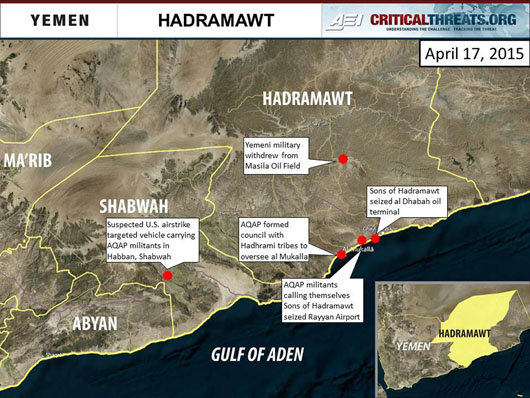 Al Qaeda in the Arabian Peninsula (AQAP) is partnering with local tribes in Yemen’s eastern Hadramawt governorate to seize and consolidate territory. The Yemeni military has been unable to staunch the militants’ advance.

AQAP is beginning to consolidate control over territory on Yemen’s southern coast. AQAP-linked militants led by AQAP’s former emir of Abyan, Khaled Batarfi, and calling themselves the “Sons of Hadramawt,”  seized control of al Dhabah oil terminal, directly east of the port city al Mukalla in Hadramawt, on April 16. The militants also seized Rayyan Airport, east of al Mukalla. The 190th Air Defense Brigade and 27th Mechanized Infantry Brigade, stationed at a base nearby, surrendered to the militants. AQAP reportedly signed an agreement with some Hadhrami tribes on April 11 to form a joint council under the name of the Hadramawt People’s Council[*] (HPC), which has been overseeing governance in al Mukalla. Local sources reported that AQAP will hand Rayyan Airport over to the HPC. AQAP appears to have allied itself with some of the local tribes, although some Hadhrami tribes in the area remain opposed to AQAP.

The UN’s main political negotiator in Yemen resigned. UN Special Envoy to Yemen Jamal Benomar, who had been trying to negotiate a political solution with the al Houthis over the past six months, resigned on April 15. UN Secretary General Ban Ki-moon is reportedly going to appoint Mauritanian diplomat Ismail Ould Cheikh Ahmed as Benomar’s replacement. Ban also urged for an immediate ceasefire in Yemen. Separately, Yemen's recently appointed Vice President Khaled Bahah stated that he hopes there will be no ground campaign against the al Houthis. Abdu Rabbu Mansour Hadi named Bahah vice president earlier this week in an attempt to increase his government’s legitimacy.

Former Yemeni President Ali Abdullah Saleh insists he will remain in Yemen. Saleh stated in an April 17 post on his official Facebook page that he will not leave Yemen, contradicting previous reports that he had fled the country. Unverified reporting from Gulf media this week alleged that Saleh had sent envoys to Gulf States in an attempt to flee the country with his family.

AQAP will most likely continue to ally with local tribes in Hadramawt and will delegate governance to local councils like the HPC. AQAP may seek to replicate this in neighboring Shabwah governorate, where AQAP is known to have been operating with tribes in the area to resist the al Houthis. Such partnerships will allow AQAP to expand its influence and operating space. The Yemeni military does not appear able to combat AQAP’s expanding presence.