Al Qaeda in the Arabian Peninsula (AQAP) is expanding its insurgent and terrorist operations and appears to be starting to control territory and key infrastructure in southern Yemen. 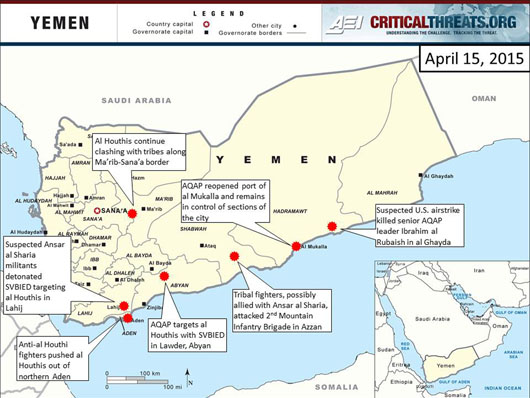 Al Qaeda in the Arabian Peninsula (AQAP) is expanding its insurgent and terrorist operations and appears to be starting to control territory and key infrastructure in southern Yemen.  The al Houthis’ continued military expansion into eastern Yemen has aroused local tribal resistance and may be generating tribal cooperation with AQAP. Islamic State in Iraq and al Sham (ISIS) fighters are taking advantage of the chaos and have executed Yemeni soldiers accused of helping the al Houthis. Iran claims to be seeking to negotiate a political solution to Yemen’s chaos, while Saudi Arabia and Arab states continue military operations against the al Houthis, which have so far generated little notable effect on the campaign.

Al Houthi expansion into Shabwah appears to be fomenting resistance from local populations. Tribal militias seized the camp of the 2nd Mountain Infantry Brigade in Azzan, Shabwah on April 12. The tribesmen accused the brigade of facilitating the al Houthis’ April 9 seizure of Ataq city. Conflicting reports stated that Ansar al Sharia was responsible for the seizure, making it unclear if tribal fighters were cooperating with AQAP’s insurgent arm. Later reporting (sources available on request) revealed that unidentified militants executed 14-15 soldiers of the 2nd Mountain Infantry Brigade on April 14 and beheaded them post-mortem. Pro-ISIS fighters calling themselves Wilayat Ataq claimed they were responsible for the executions. Tribal fighters have distanced themselves from the soldiers’ execution.

Iran claims to be seeking a political solution to Yemen’s crisis. Iranian Foreign Minister Mohammed Javad Zarif laid out a four-point plan to resolve Yemen’s crisis including a cease-fire, humanitarian assistance, political dialogue, and an agreement by regional powers that Yemen should have a "broad-based government.” Zarif stated on April 15 that Tehran will use its influence to negotiate a peace deal and end Saudi-led airstrikes. Unconfirmed reports suggest that Iranian military advisers are assisting the al Houthis, although Iranian officials deny that any Iranians are present in Yemen.

Suspected U.S. airstrike killed senior AQAP leader. An airstrike hit a vehicle carrying AQAP militants on April 12 in al Ghayda, Hadramawt, east of al Mukalla. AQAP released a statement on April 14 confirming that the airstrike killed the group’s senior religious leader and former Guantanamo Bay detainee, Ibrahim al Rubaish. This is the first targeted airstrike since February 28 and the fifth in 2015. The airstrikes seem to have had minimal impact on AQAP’s operations in Yemen.

Al Houthis are attempting to push into Yemen’s eastern oil-rich governorate, Ma’rib, while losing ground in southern Yemen. Al Houthi fighters began clashing with tribal forces in Sirwah, Ma’rib, along the Sana’a-Ma’rib border on April 11. Fighting continued through April 15 and has resulted in a high number of casualties. The al Houthis have not been able to advance farther east into Ma’rib. Ma’rib tribes may consider working with AQAP fighters, who are known to have a presence in the governorate. Separately, anti-al Houthi fighters stated on April 14 that they had pushed back al Houthis from northern Aden and had seized an infantry base loyal to the al Houthis near the Belhaf Liquid Natural Gas facility in southern Shabwah.

The al Houthis’ military expansion will likely continue to incite tribal resistance. AQAP and ISIS militants appear to be taking advantage of anti-al Houthi sentiments to cooperate with local forces to resist the al Houthis. The Yemeni military is not actively combating either AQAP or ISIS, allowing both groups to operate more freely.