Saudi-led coalition airstrikes continued to target al Houthi military sites throughout Yemen for the sixth straight day. The al Houthis and pro-Hadi forces are currently battling for control of the southern port city of Aden. The al Houthis appear to be succeeding in moving forces to southern governorates in an attempt to isolate Aden. 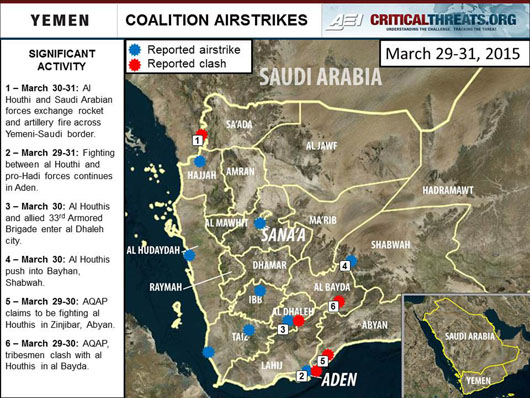 Saudi-led coalition airstrikes continued to target al Houthi military sites throughout Yemen for the sixth straight day. The al Houthis and pro-Hadi forces are currently battling for control of the southern port city of Aden. The al Houthis appear to be succeeding in moving forces to southern governorates in an attempt to isolate Aden.

Saudi Arabia and al Houthis exchanged heavy fire along the Saudi-Yemeni border after an airstrike struck a refugee camp. An airstrike, attributed to the Saudi-led coalition, hit the al Mazraq refugee camp in Haradh, Hajjah, in north Yemen, on March 30, killing an estimated 29 to 45 civilians. The intended target of the airstrike is unclear, though it may have been aimed at an al Houthi militant convoy reported nearby. Abdu Rabbu Mansour Hadi’s foreign minister blamed al Houthi fighters for the attack, although it seems less likely that the al Houthis would attack the camp than the coalition. Al Houthis and Saudi forces exchanged artillery and rocket fire along the Saudi-Yemeni border in Shada district in Sa’ada governorate, the day after the airstrike.

Islamic State in Iraq and al Sham (ISIS) fighters in Yemen continue to claim a large number of attacks against the al Houthis and have established a media presence to claim attacks. An unofficial pro-ISIS Twitter account, al Battar Media Foundation, published multiple statements online on March 29 and 30 detailing attacks against the al Houthis in Lahij, Abyan, and Aden and calling for jihad against the al Houthis. Al Battar also published a video detailing the March 20 mosque bombings in Sana’a that targeted a number of al Houthi leaders. ISIS’s presence in Yemen still remains unclear. ISIS fighters in Yemen claim to operate in some of the same areas as al Qaeda in the Arabian Peninsula (AQAP), but the relationship between these militants and AQAP fighters is still unknown.

AQAP continues to fight al Houthis along with local populations in al Bayda and Abyan. AQAP fighters claimed to have started fighting the al Houthis in Zinjibar, Abyan, which the al Houthis and the allied 115th Infantry Brigade entered on March 29. A local AQAP fighter, Abu al Zinad al Abyani, alleged that 15 of his fighters were killed during the fighting. AQAP’s insurgent arm, Ansar al Sharia, claimed credit for a March 30 attack on al Houthis in Dhi Na’im district in al Bayda from where tribesmen also claimed to have expelled the al Houthis the same day, indicating that Ansar al Sharia may have been cooperating with local tribes. AQAP has not given a public response to ISIS’s emergence in Yemen.

Iran calls for dialogue to resolve Yemen crisis. Iranian Arab and African Affairs Deputy Foreign Minister Hossein Amir Abdollahian stated that Iran is trying to reach a solution on Yemen with Saudi Arabia, while at the same time warning that the coalition’s air campaign on the al Houthis is a “strategic mistake.”Abdollahian did not state whether Iran is providing military support for the al Houthis but reiterated that Iran is supporting the fight against terrorism in the region.

Yemen is at risk of a major humanitarian crisis. The United Nations Children’s Fund’s (UNICEF) Yemen representative, Julien Harneis, warned that Yemen could suffer a humanitarian crisis due to food insecurity and malnutrition in sixth months to a year. Harneis also stated that the al Houthis are using a large number of child soldiers to bolster their ranks. UN High Commissioner for Human Rights Zeid Ra’ad al Hussein expressed alarm over the number of civilians killed in the current conflict. An estimated 25 civilians were killed in a suspected airstrike at a dairy factory in al Hudaydah on March 31.

The al Houthis do not appear to be waning in their will to battle for southern Yemen and seem unwilling to come to the negotiating table to end the current conflict. It seems likely that Saudi-led airstrikes will continue to target al Houthi military targets and will try to push the al Houthis back from Aden and Lahij. Both ISIS and AQAP will seek to take advantage of the security vacuum to battle the al Houthis and increase operating room.