Salafi-Jihadi Areas of Operation in Libya

Salafi-jihadi groups surged in Libya amid the political and military instability that followed its 2011 revolution. Al Qaeda in the Islamic Maghreb (AQIM)—al Qaeda’s North African branch—has long maintained a haven in southwestern Libya, and it supported the formation of Libyan affiliates during the post-revolution period. The Islamic State established a flagship affiliate in Libya in 2014, and the group controlled the coastal city of Sirte in central Libya until 2016, when a multinational counterterrorism effort recaptured the city and forced remnants of the Islamic State group to relocate to southwestern Libya.

Salafi-jihadi activity in Libya remains at a low point in 2022. Conditions persist that could facilitate renewed Salafi-jihadi activity, however; Libya suffers from an ongoing political stalemate, a highly fractured security apparatus, and a lack of basic public services. AQIM and the Islamic State in Libya also play a supporting function for more active al Qaeda and Islamic State affiliates in West Africa.

Counter-IS Operations: Locations where security forces have conducted operations against suspected IS-Libya militants from 2020 to 2022.

Counter-AQIM Operations: Locations where security forces have conducted operations against suspected AQIM militants from 2020 to 2022. 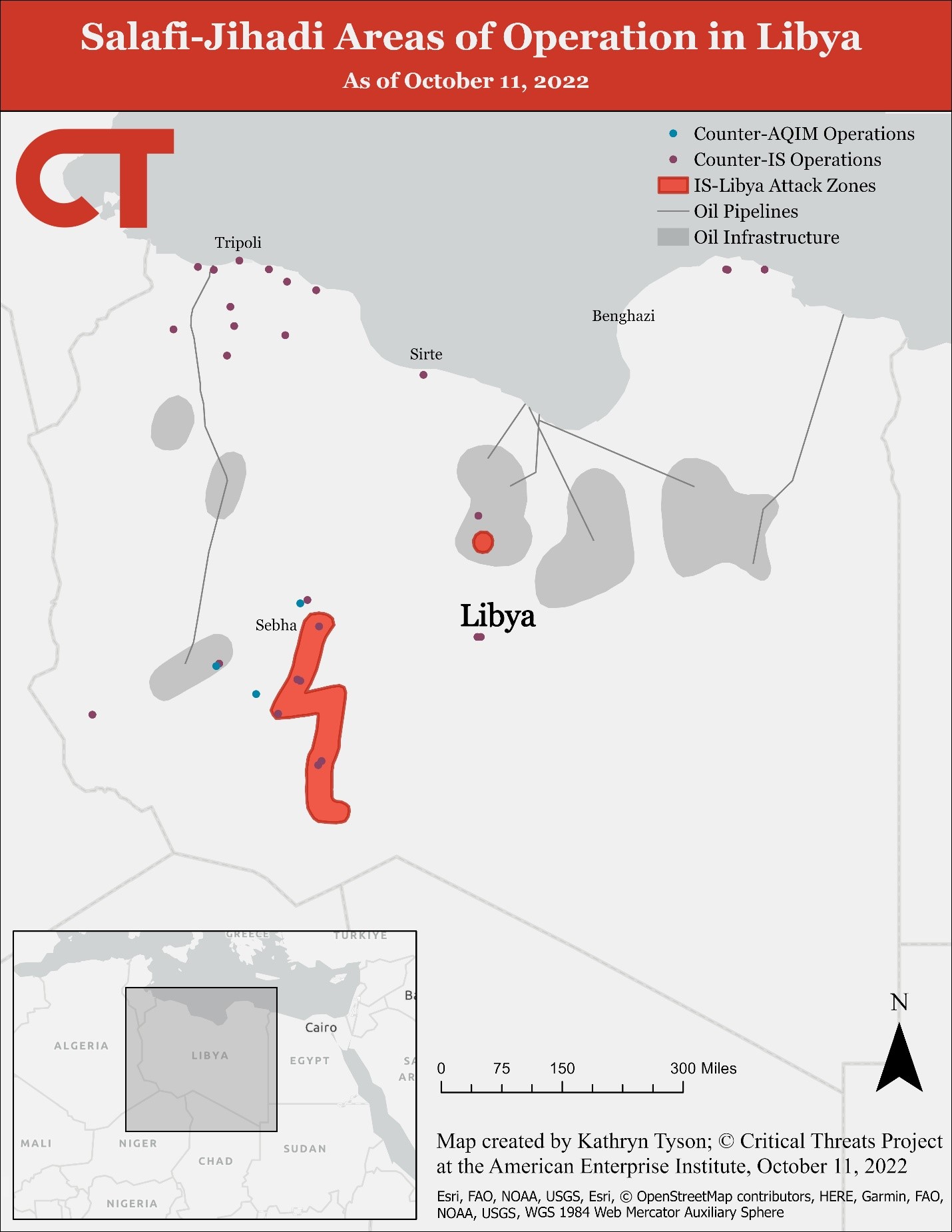 Note: AQIM is Al Qaeda in the Islamic Maghreb.

Background: The Islamic State in Libya

The Islamic State in Libya is an Islamic State in Iraq and Syria affiliate based in Libya. IS-Libya exploited a political and security vacuum in the years following the overthrow of Libyan leader Muammar Qaddafi in 2011 to establish a base in Libya by 2014. The group also implanted itself using existing Salafi-jihadi networks. ISIS helped seed the IS-Libya branch by providing it experienced senior leaders and funding. ISIS leader Abu Bakr al Baghdadi formally recognized IS-Libya in November 2014. By 2015, IS-Libya had established multiple branches in Libya, including a group that controlled the city of Sirte on the north-central Libyan coast.

A combination of international and Libyan military campaigns pushed IS-Libya out of coastal cities, including Sirte, in 2016–17. IS-Libya members retreated to the Fezzan region in southwestern Libya, entering a period of dormancy. IS-Libya has renewed some of its activity since 2016. The group increased its attack tempo in 2018, carrying out several attacks in the northwest. IS-Libya also reconstituted some of its attack capabilities in the southwest in 2021. IS-Libya also continues to cooperate with other IS affiliates in West Africa.

IS-Libya remains a shadow of its former self in 2022. The UN assessed in July 2022 that IS-Libya has fewer than 100 fighters. IS-Libya is confined to the sparsely populated Fezzan region and conducts sporadic attacks against Libyan militia checkpoints in the area. IS-Libya has not carried out an attack in coastal Libya since 2018, but it has not given up on renewing attacks in these urban areas. The same UN report said that IS-Libya seeks to reactivate its logistical nodes in the northwest, and Libyan security forces have claimed to arrest several IS-Libya members in northwestern cities in 2022. Libyan political and security factions are often preoccupied with political competition over the counter–Islamic State mission, which could create new opportunities for the group.

AQIM is al Qaeda’s affiliate in North and West Africa. AQIM originated from an Algerian-led militant faction fighting the Algerian government during Algeria’s civil war in the 1990s. This faction officially joined al Qaeda in 2006 and renamed itself AQIM. AQIM’s center of activity since the 2010s has moved southward into West Africa’s Sahel region and, to a lesser extent, eastward into Libya and Tunisia. AQIM and affiliated groups now operate in Algeria, Burkina Faso, Libya, Mali, and Tunisia and may operate intermittently in Niger and several Gulf of Guinea states, including Côte d’Ivoire.

AQIM exploited widespread uprisings in Libya in 2011 to expand its safe havens. The collapse of the Qaddafi regime in Libya also provided AQIM with a new source of arms and recruits. AQIM has not directly claimed any attacks in Libya, but individuals affiliated with AQIM attacked two US diplomatic compounds in Benghazi, eastern Libya, in 2012, killing four Americans including the US ambassador. AQIM also set up training camps in Libya, from which it sent fighters to the Syrian civil war.

AQIM has used Libya more as a leadership headquarters than a staging ground for attacks. The AQIM founder survived a US air strike in Libya in 2015 and was targeted in Libya again by a French strike in 2016. The UN reported in July 2021 that AQIM uses Libya’s southwest as a logistics hub to organize the activities of its West African affiliates. The UN reported in July 2022 that AQIM continued using Libya as a base to send reinforcements to northern Mali. Libyan security forces continue to carry out infrequent arrests against suspected AQIM members in the southwestern Fezzan region, indicating AQIM still maintains cells in the country.