ISW is publishing an abbreviated campaign update today, October 23. This report focuses on Russian Defense Minister Shoigu's several calls with his western counterparts and preposterous claims that Ukraine is preparing a false-flag “dirty bomb” attack against Russia, likely to pressure Ukraine into concessions and intimidate NATO. On the battlefield, Ukrainian forces conducted further offensive operations in northeastern Ukraine, and Russian forces continued to set conditions for a withdrawal from Kherson. Those developments are summarized briefly and will be covered in more detail tomorrow.

Russian Defense Minister Sergei Shoigu likely sought to slow or suspend Western military aid to Ukraine and possibly weaken the NATO alliance in scare-mongering calls with several NATO defense ministers on October 23. Shoigu separately called his counterparts from France, Turkey, the United Kingdom, and the United States on October 23, claiming that Ukraine is preparing to conduct a false-flag attack using a dirty bomb (a conventional explosive laced with radioactive material that is not a nuclear weapon) to accuse Russia of using weapons of mass destruction.[1] Russian state media amplified this false and ridiculous claim.[2] Russian Ministry of Defense reports on the calls contain slight differences; they state that Shoigu discussed a claimed “steady tendency towards further, uncontrolled escalation” in Ukraine in the call with his French counterpart; discussed the “situation in Ukraine” and made false claims that Ukraine is preparing to use a dirty bomb in his calls with the United Kingdom, France, and Turkey; and simply discussed the situation in Ukraine without reference to a dirty bomb in his conversation with US Secretary of Defense Lloyd Austin. Shoigu last spoke with Secretary Austin on October 21. Representatives from the United States, United Kingdom, and Ukraine categorically denied and condemned Shoigu’s false allegations, and US Secretary Austin called his UK counterpart, Ben Wallace, following the calls with Shoigu.[3] France and Turkey have not issued formal statements as of this writing.

The Kremlin is unlikely to be preparing an imminent false-flag dirty bomb attack. Shoigu’s claims further a longstanding Russian information campaign. The Kremlin has repeatedly claimed that Western states will help Ukraine conduct a false-flag WMD attack since the earliest stages of its invasion of Ukraine in February. The Russian Ministry of Defense claimed it had information the US was “preparing provocations to accuse the Russian Armed Forces of using chemical, biological, or tactical nuclear weapons” in April.[4] Putin claimed in his pre-invasion speech on February 24 that Ukraine was preparing for a nuclear attack against Russia, and Russian state disinformation outlets repeatedly claimed Western states were supporting Ukraine’s development of nuclear weapons and planning false-flag attacks.[5]

Shoigu’s claims likely do not portend Russian preparations to use non-strategic nuclear weapons in Ukraine either. ISW previously stated on September 30 that “ISW cannot forecast the point at which Putin would decide to use nuclear weapons. Such a decision would be inherently personal, but Putin’s stated red lines for nuclear weapon use have already been crossed in this war several times over without any Russian nuclear escalation.”[6]  Russia does not “need,” under formal Russian nuclear doctrine, a further event to justify nuclear weapons use.[7] Ukraine is not apparently on the verge of tripping some new Russian redline, on the other hand, that might cause Putin to use non-strategic nuclear weapons against it at this time. Shoigu’s comments are thus unlikely to presage a nuclear terror attack against one or more major Ukrainian population centers or critical infrastructure in hopes of shocking Ukraine into surrender or the West into cutting off aid to Ukraine. Such attacks would be highly unlikely to force Ukraine or the West to surrender, as Ukraine’s government and people have repeatedly demonstrated their will to continue fighting, and the West would find it very challenging simply to surrender in the face of such horrific acts because of the precedent such surrender would set.

Shoigu’s calls—and Russian state media’s amplification of false dirty bomb threats—are therefore likely intended to intimidate Western states into cutting or limiting support for Ukraine as Russia faces continued military setbacks and the likely loss of western Kherson by the end of the year. ISW has assessed since May that Putin seeks to force Ukraine to accept his terms and deter continued Western support for Ukraine through nuclear brinksmanship.[8] The recipients of Shoigu’s calls are also notable. The Kremlin has repeatedly framed the United States and the United Kingdom as Ukraine’s primary backers and the enablers of what it claims are aggressive policies toward Russia, while France and Turkey have (to varying degrees) framed themselves as mediators in the conflict. Shoigu’s round of calls was likely further Russian saber-rattling to intimidate Ukraine’s Western supporters and possibly widen fissures within the NATO alliance, not condition setting for imminent nuclear use. 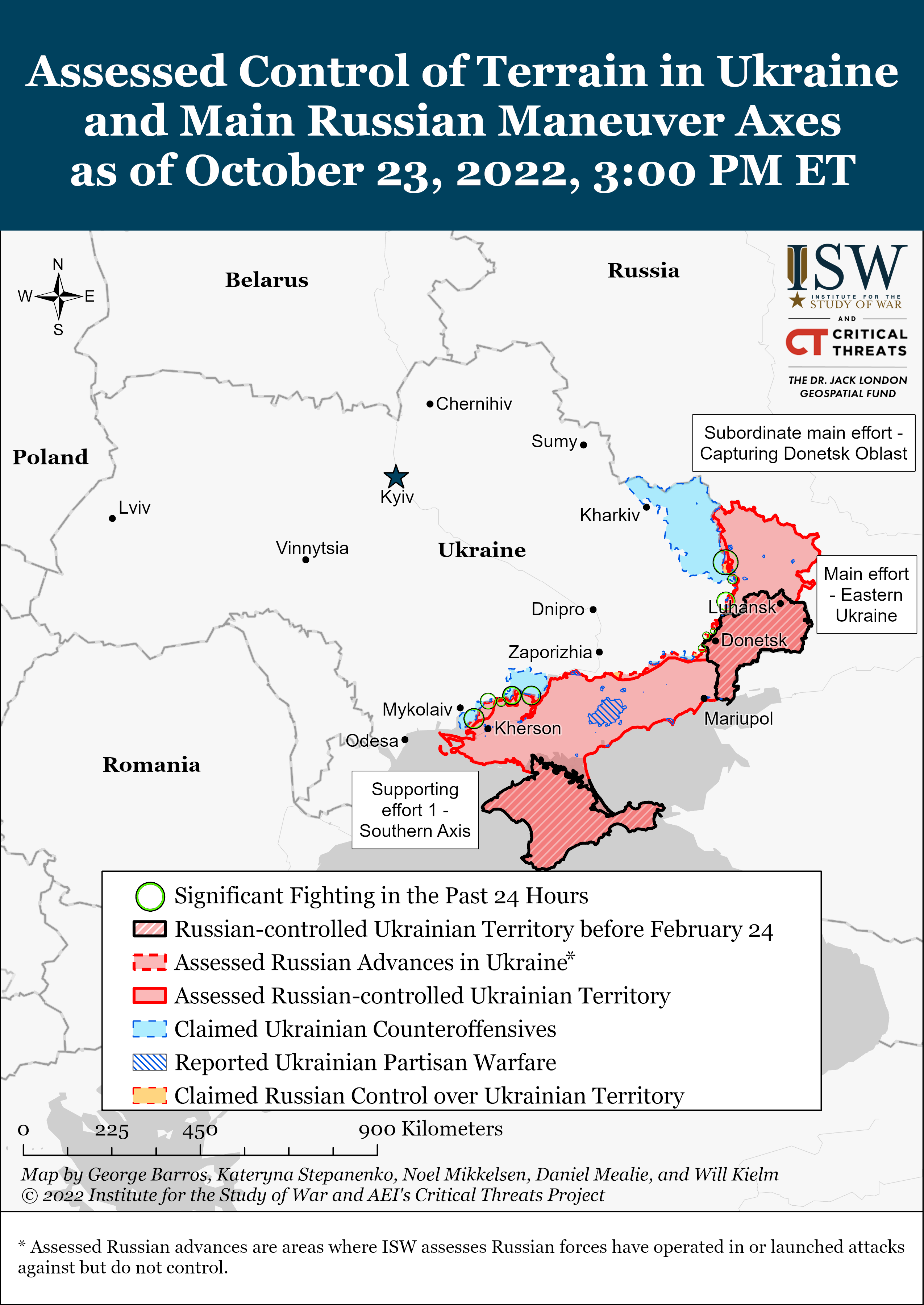 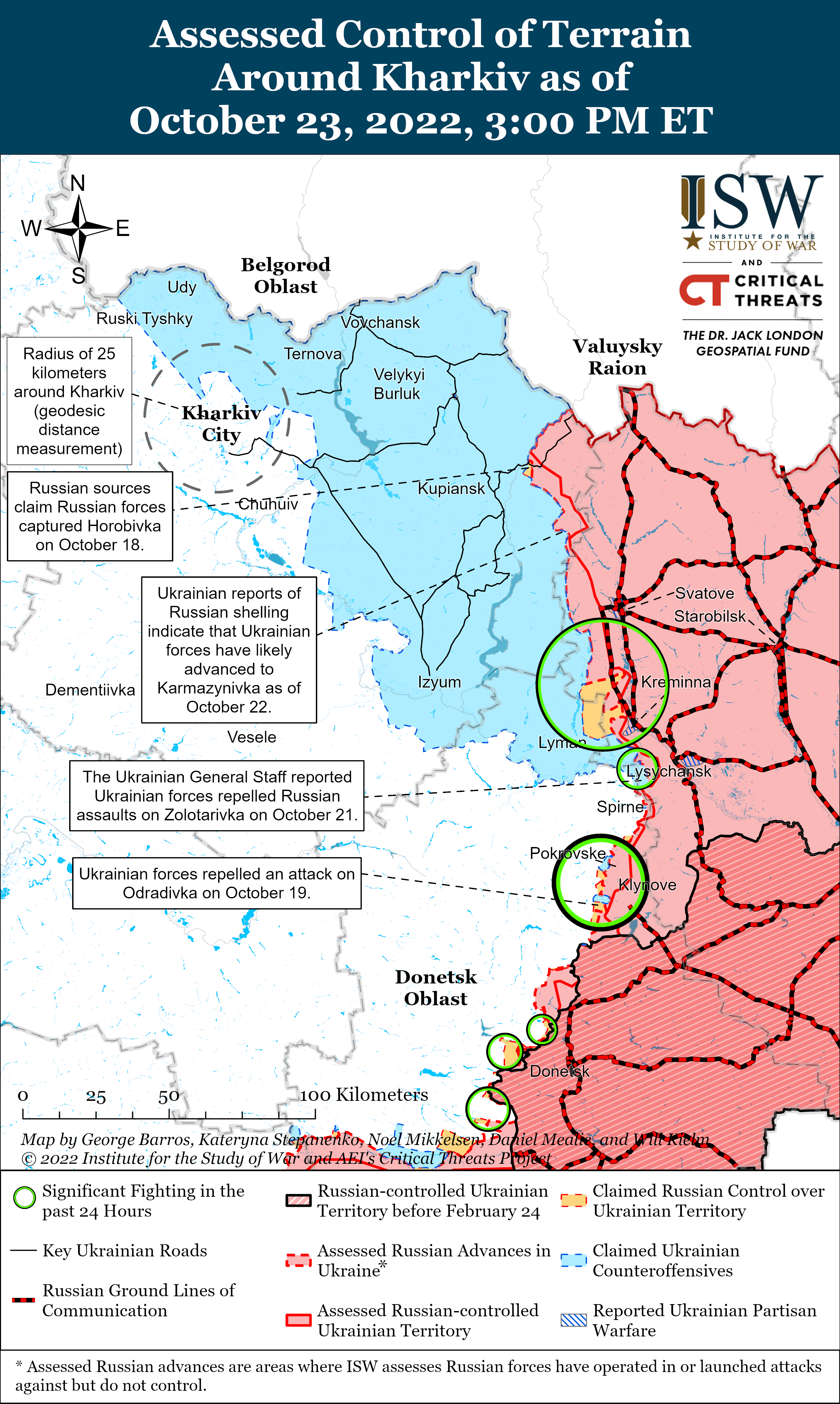 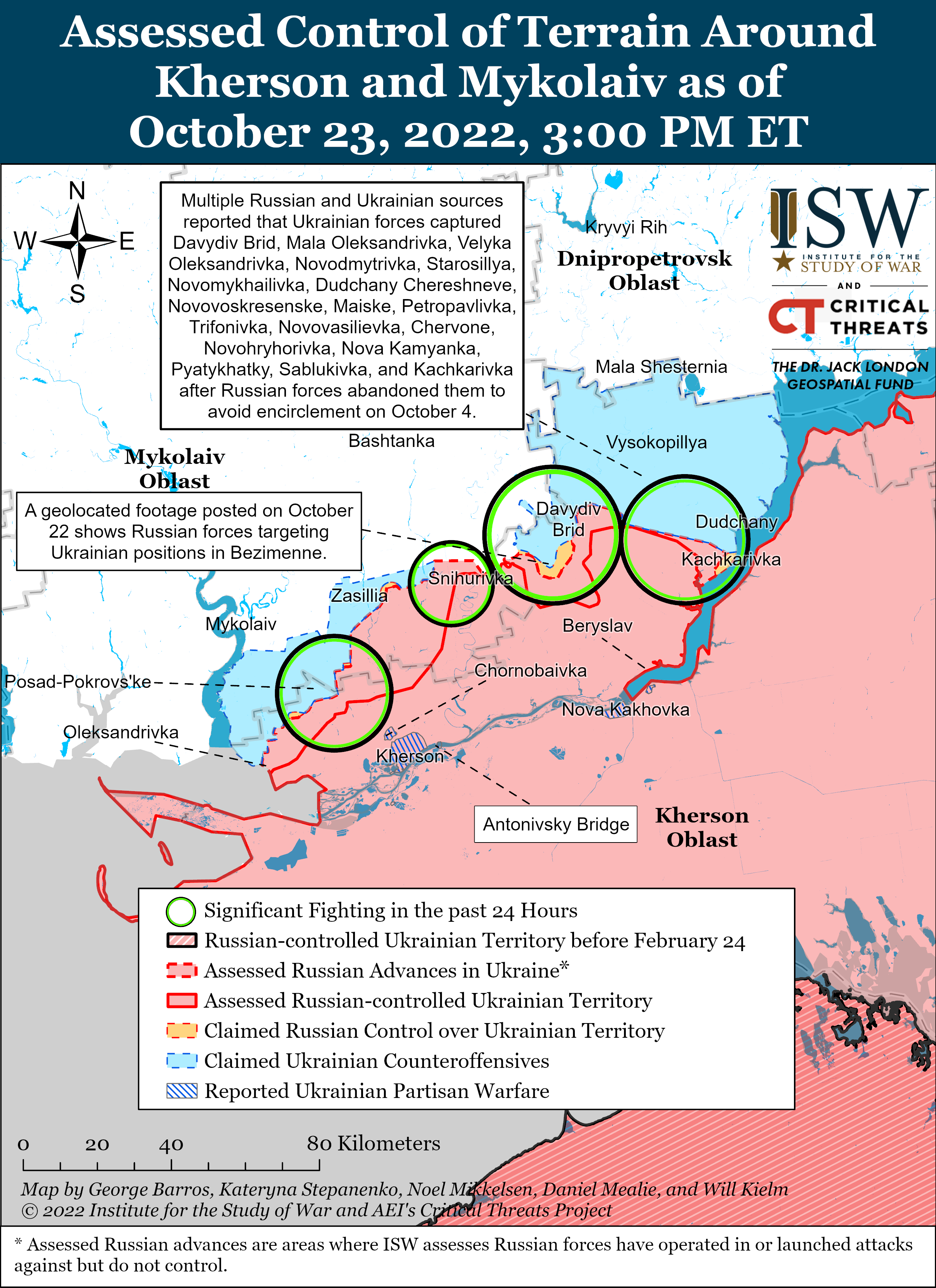 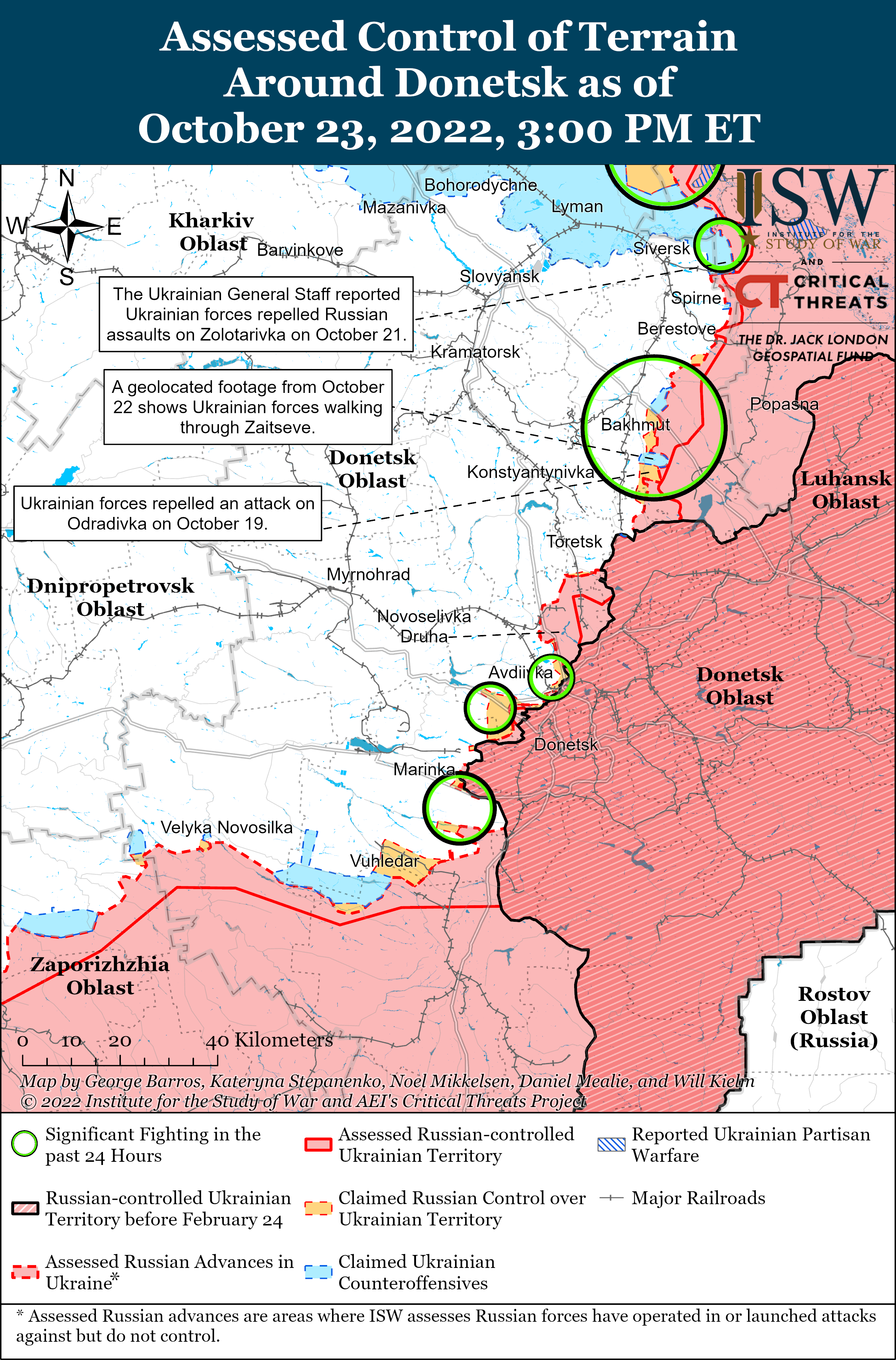