ISW cannot confirm initial reports of a Ukrainian Neptune anti-ship missile strike on the Russian frigate Admiral Makarov on May 6.[1] Pentagon Spokesperson John Kirby said the United States cannot confirm the reported strike and added “we’ve been looking at this all day.”[2] ISW will update this assessment with further information as it becomes available. 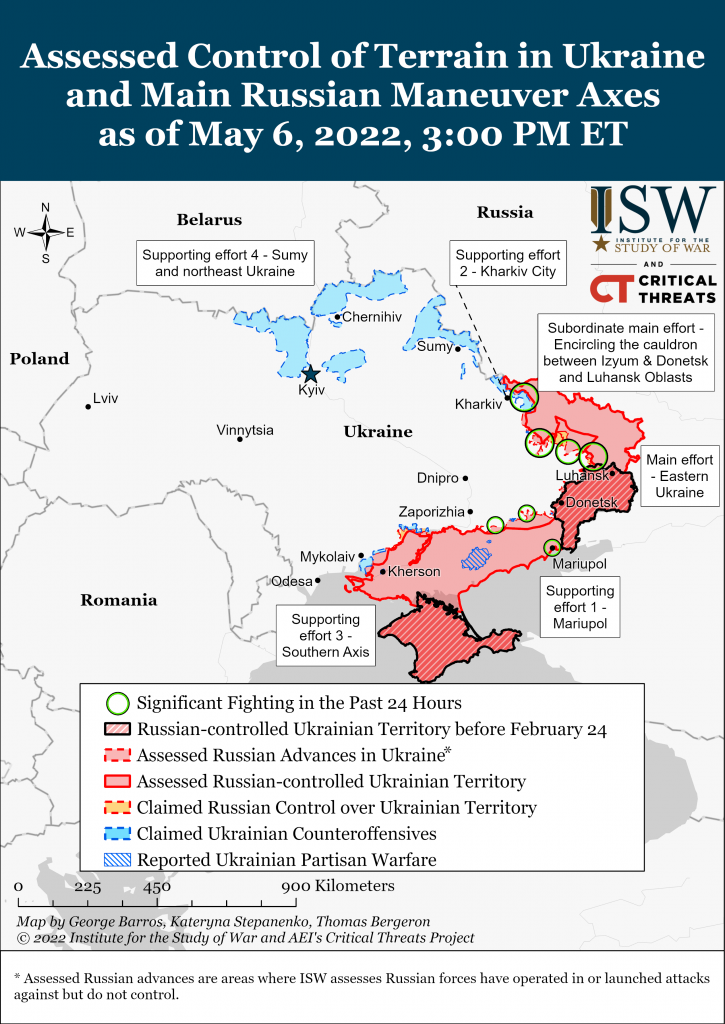 ISW has updated the structure of its discussion of the primary efforts Russian forces are currently engaging in. The main Russian effort is concentrated in Eastern Ukraine and includes one subordinate main effort and four supporting efforts.  The subordinate main effort is the encirclement of Ukrainian troops in the cauldron formed between the Izyum-Slovyansk highway and the Kreminna-Rubizhne-Popasna frontline in Luhansk. The four supporting efforts are: completing the seizure of Mariupol, retaining pressure on Kharkiv City, holding occupied territory on the Southern Axis, and threatening northeastern Ukraine from Russian and Belarusian territory. 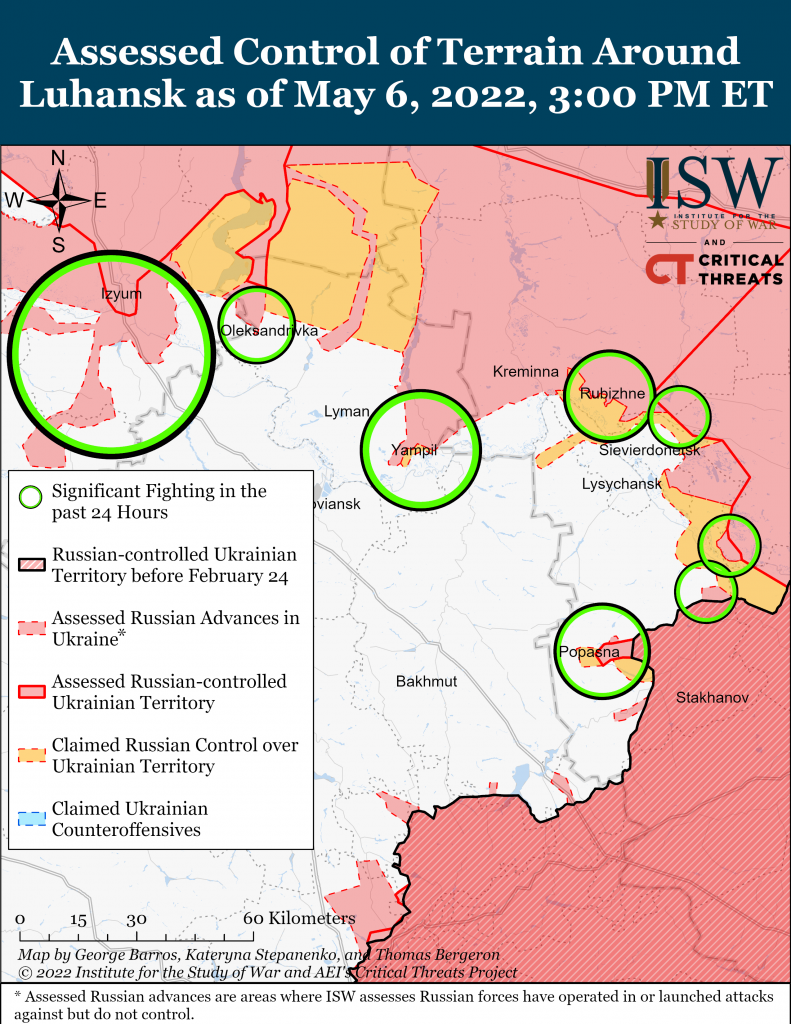 Russian forces continued occupation measures but likely face widespread civilian resistance and may not be able to fully secure the city on their intended timetable. Russian forces were observed changing road signs in Mariupol from Ukrainian to Russian on May 5, and Ukrainian officials reported on May 6 that Russian forces are disseminating false information on Ukrainian losses to lower civilian morale.[12] Kremlin spokesperson Dmitri Peskov declined to state if Russian forces would hold a parade in Mariupol on May 9, saying a wide celebration is currently impossible and claiming he could not say “on the behalf of the military if there are any plans” regarding a parade.[13] The continued resistance of Ukrainian forces in the Azovstal plant and likely widespread civilian resistance to the Russian occupation may be disrupting previously announced Russian plans to conduct a Victory Day exhibition in Mariupol. 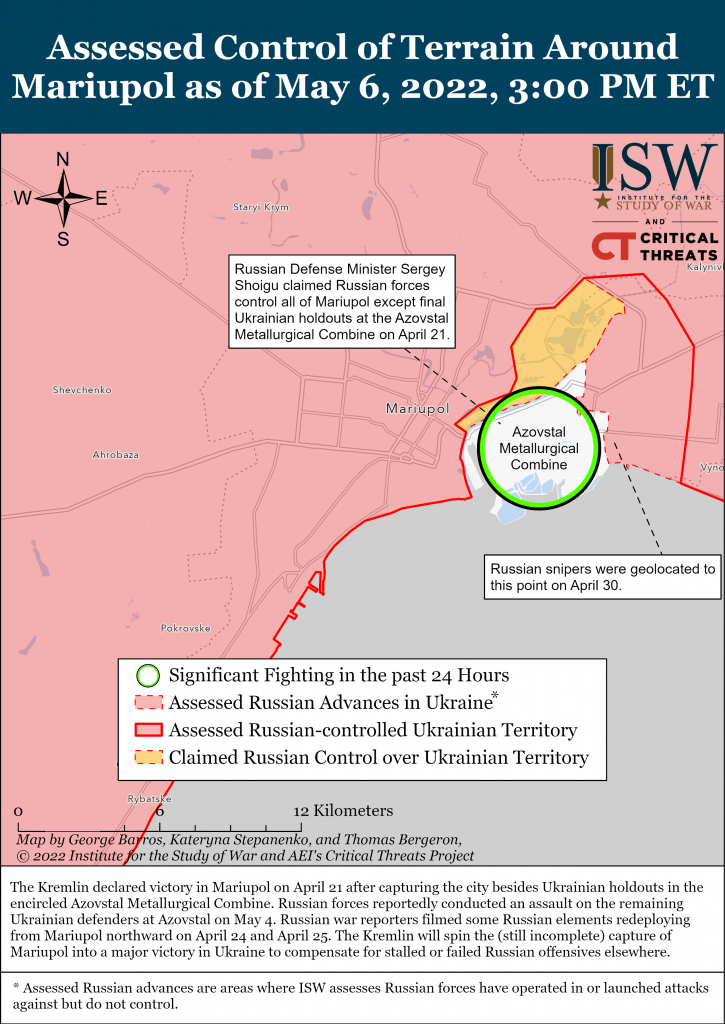 The Ukrainian counteroffensive north and east of Kharkiv made substantial progress in the last 24 hours and Ukrainian forces may be able to drive Russian forces out of tube artillery range of Kharkiv city itself in the coming days. The Ukrainian General Staff and independent sources reported that Ukrainian forces recaptured Oleksandrivka, Fedorivka, Ukrainka, Shestakovo, Peremoha, Tsirkuny, and part of Cherkasy Tishki from May 5-6.[14] Russian forces continued to shell Ukrainian positions, build up air defenses, and regroup damaged units on the Kharkiv axis.[15] Russian forces likely face the choice of sending additional reinforcements intended for eastern Ukraine to support defensive positions on the outskirts of Kharkiv or lose their ability to both shell the city and screen lines of communication through Kharkiv Oblast. 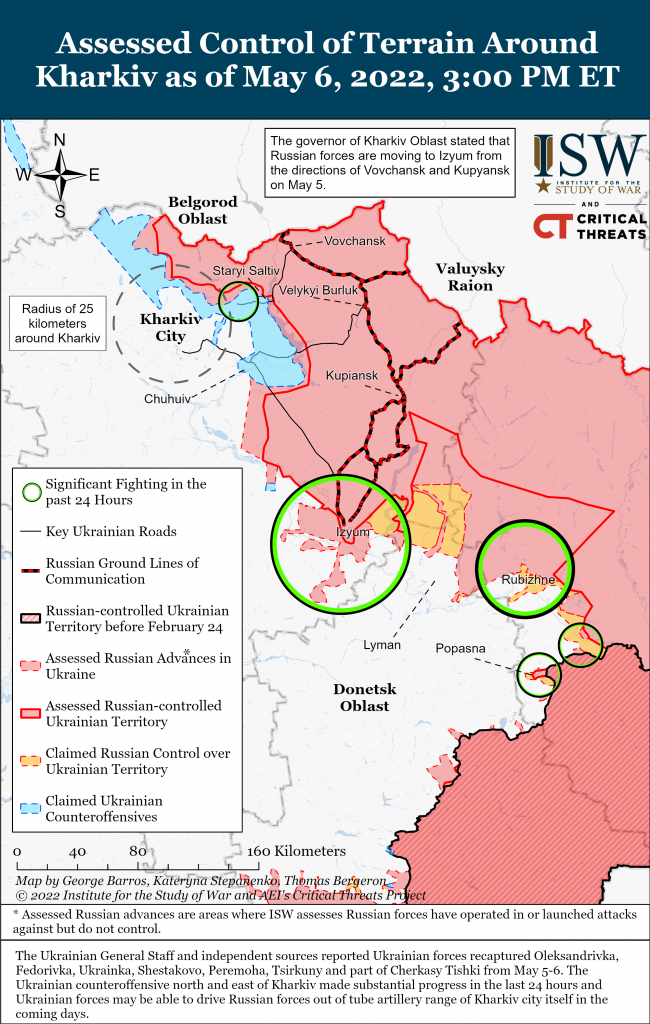 Russian forces in the entire southern axis did not conduct any active operations (halting recent attacks toward Kryvyi Rih and Zaporizhia) in the last 24 hours and continued to reinforce their frontline positions.[16] Russian forces continued to shell Ukrainian positions along the entire southern axis. The Ukrainian General Staff specified that Russian forces are strengthening their air defenses and electronic warfare capabilities in the southern direction.[17] Russian forces may be concentrating on reconnoitering Ukrainian positions and preparing for further offensive operations, as local Ukrainian authorities reported on May 5.[18] Ukrainian forces did not conduct any reported counterattacks toward Kherson in the past 24 hours, and ISW did not collect any additional data to verify claimed Ukrainian advances since May 4.[19]

The Ukrainian General Staff and Operational Command South reported that Russian forces continue to provoke tensions in Transnistria and seek ways to provoke an escalation, including by spreading false allegations of Ukrainians shooting into Transnistria.[20] 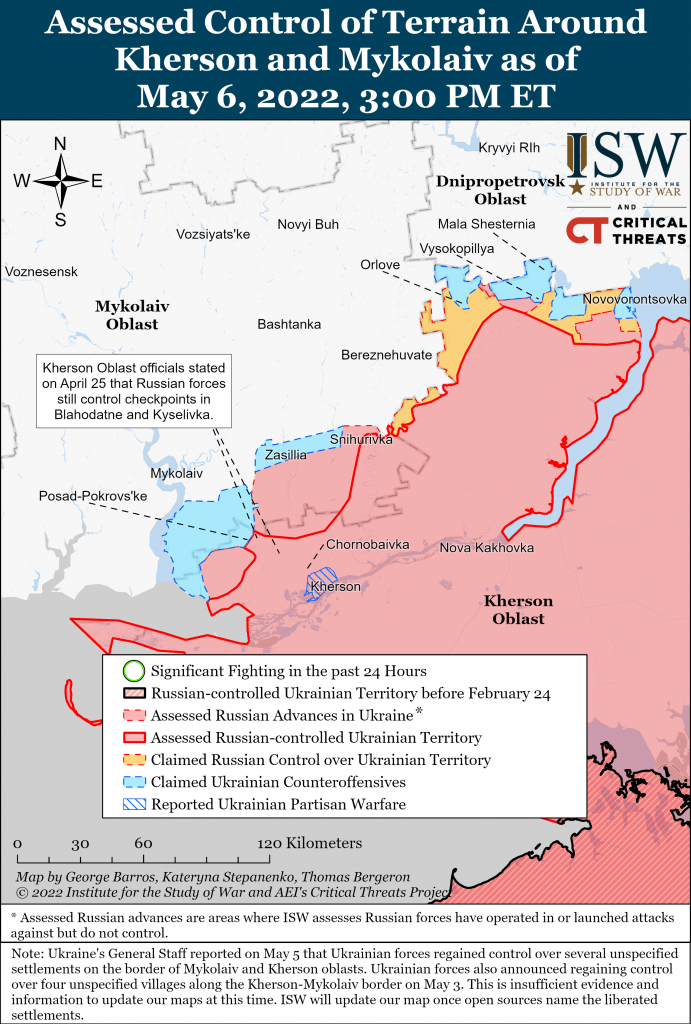