Ukrainian forces retain control of defensive positions in eastern and southwestern Mariupol, despite Russian claims to have captured most of the city. ISW was able to confirm the specific locations of ongoing Russian assaults on April 8 for the first time in several days. Russian forces continue to attempt to regroup and redeploy units withdrawn from northeastern Ukraine to support an offensive in eastern Ukraine, but these units are unlikely to enable a Russian breakthrough and face poor morale. Russian forces along the Izyum-Slovyansk axis did not make any territorial gains in the last 24 hours. Ukrainian counterattacks toward Kherson continue to threaten Russian positions around the city. 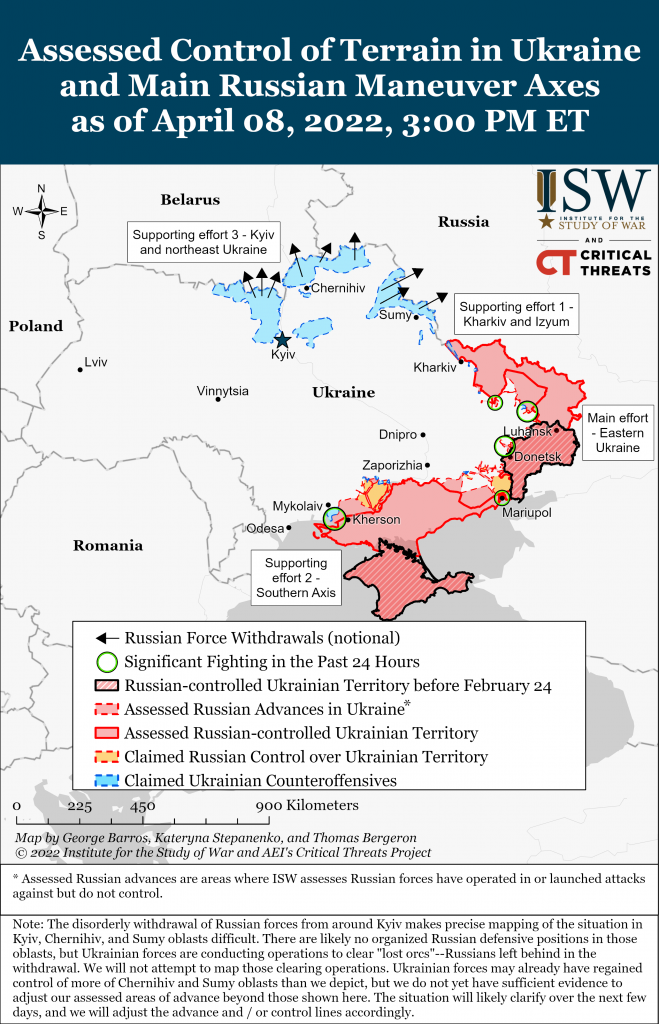 Russian forces are increasingly refusing to reenter combat, and the Kremlin remains unlikely to quickly redeploy effective forces from northeastern Ukraine to operations in Donbas. The Ukrainian General Staff reported that more than 80% of personnel in some unspecified Russian units previously involved in combat operations are refusing to return to the front.[1] Russian commanders are reportedly refusing to release soldiers whose service contracts have expired, forcing them to stay with their units. The Ukrainian GUR (Military Intelligence) claimed to have intercepted a letter from Russian Chief of Missile Troops and Artillery Mikhail Matveevsky to several Russian training centers calling for further censorship of troops undergoing training, and encouraged propaganda highlighting the monetary benefits of serving in the war.[2] Elements of Russia’s 6th Combined Arms Army (CAA), 20th CAA, 1st Guards Tank Army, and coastal troops of the Northern and Baltic Fleets continue efforts to regroup for likely redeployment to eastern Ukraine.[3] The General Staff additionally reported that Russian Western Military District Commander Colonel General Alexander Zhuravlev (the first explicit mention of Zhuravlev since the war began) is planning to remove Major General Ivan Belyavsky from the position of the head of the WMD personnel department due to low recruitment numbers.[4] 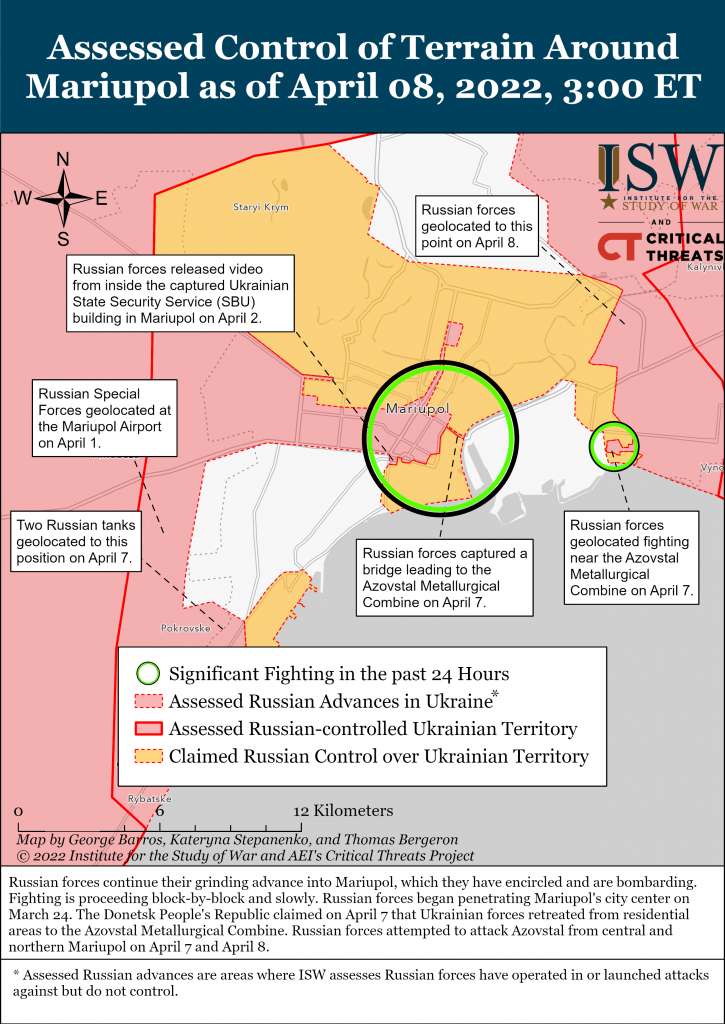 Ukrainian forces continued to hold out against Russian assaults in areas of southwestern and eastern Mariupol as of April 8. The Ukrainian Mayor of Mariupol, Petro Andryushenko, issued a statement on April 8 denying Russian claims that they captured central Mariupol on April 7.[5] Andryushenko said Russian forces control a quarter of the city, including the Drama Theater and SBU headquarters, but that this does not constitute the entire “city center.” Andryushenko highlighted that most videos of Russian forces have been geolocated to Mariupol’s outskirts and said Ukrainian forces control the Primorsky District (southwest Mariupol), part of the east bank of the Azovstal District (central Mariupol), the coastline southwest of the city down to Azovs’ke, and several factory areas. 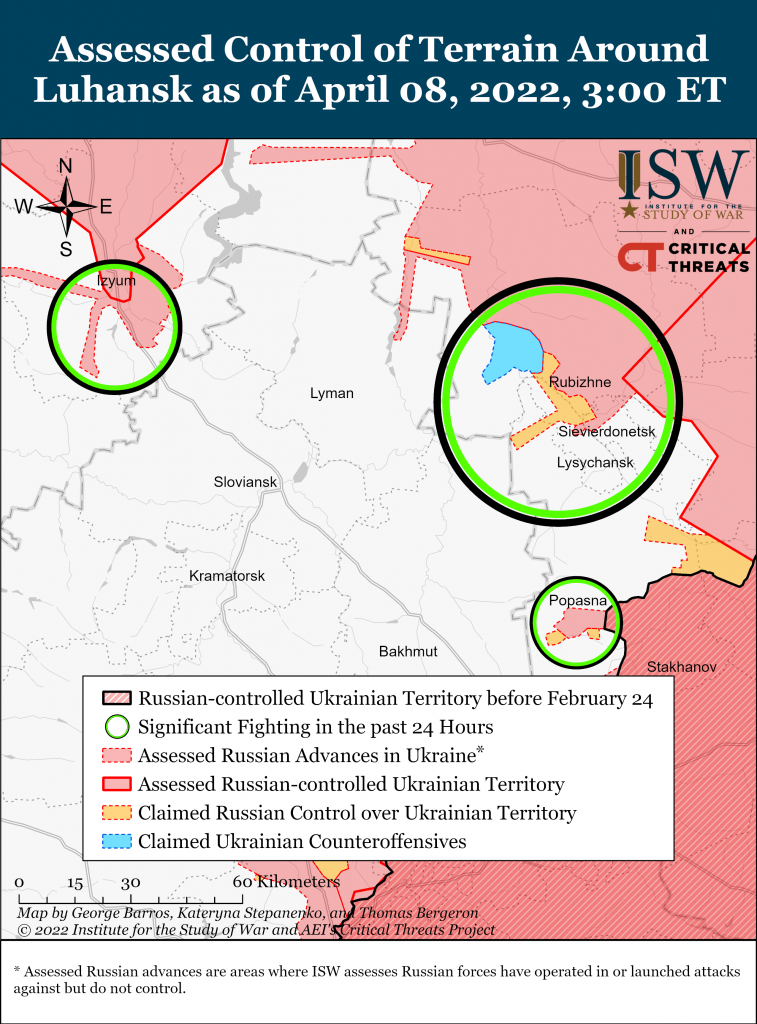 A Russian Tochka-U missile struck a civilian evacuation point at the Kramatorsk rail station on April 8, killing at least 50 and wounding around a hundred evacuees.[11] Russian attempts to deny the strike are completely false. Pro-Russian Telegram channels and the Russian Ministry of Defense initially claimed Russian forces conducted precision strikes on railway stations in Donbas before deleting the claims once heavy civilian casualties emerged.[12] Russian and DNR sources claimed both that the strike did not occur and that Ukrainian forces launched the strike as a false flag, ludicrously claiming that Russian forces do not use the Tochka-U missile—despite the fact Russia designed the Tochka, has demonstrably used it in previous strikes, and confirmed reports that Russia’s 8th Combined Arms Army (operating in Donbas) is equipped with the missile.[13]

Russian forces continued to shell civilian infrastructure in Kharkiv and its outskirts on April 8.[14] The Ukrainian General Staff additionally reported that Russian forces are establishing minefields around Kharkiv in expectation of Ukrainian counterattacks.[15]

Russian forces continued attacks south of Izyum toward Slovyansk and Barvinkove on April 8 but did not take any new territory.[16] Local authorities continued to urge civilians to evacuate the area.[17]

The Ukrainian General Staff confirmed on April 8 that Russian forces have completely withdrawn from Sumy Oblast, confirming reports from local civilian authorities on April 6.[21] Local authorities warned civilians to not return home and stay away from Russian equipment, much of which has been mined.[22] Ukrainian explosives disposal efforts will likely take weeks or months, with Ukrainian National Police Head Igor Klimenko stating on April 8 that Ukrainian forces have cleared more than 3,000 explosive devices from Irpin alone.[23] The Ukrainian General Staff reported that four Russian battalion tactical groups (BTGs) remain on the Ukrainian-Belarusian border to fix Ukrainian forces in place, though these forces remain highly unlikely to launch new offensive operations.[24]