Russian forces continued to amass on the Izyum axis and in eastern Ukraine, increasingly including low-quality proxy conscripts, in parallel with continuous – and unsuccessful – small-scale attacks. Russian forces did not take any territory on the Izyum axis or in Donetsk and Luhansk Oblasts in the past 24 hours. Russian forces deploying to eastern Ukraine reportedly continue to face significant morale and supply issues and appear unlikely to intend, or be able to, conduct a major offensive surge in the coming days.[1] Deputy Ukrainian Minister of Defense Anna Malyar stated on April 17 that the Russian military is in no hurry to launch an offensive in eastern Ukraine, having learned from their experience from Kyiv – but Russian forces continue localized attacks and are likely unable to amass the cohesive combat power necessary for a major breakthrough.[2] 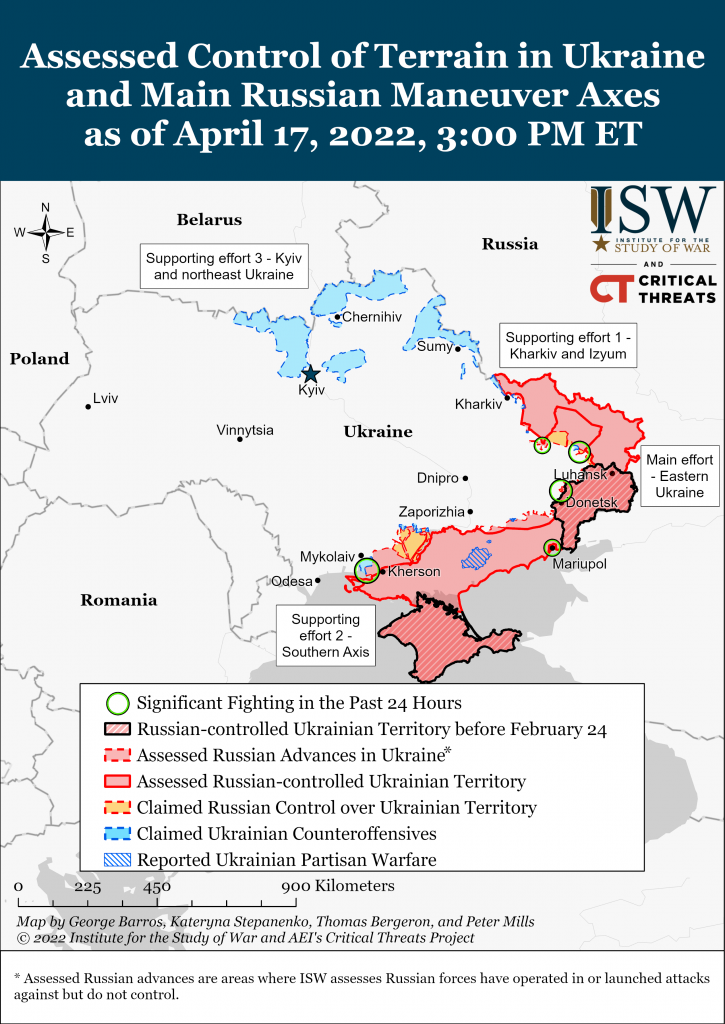 The Ukrainian Military Intelligence Directorate (GUR) reported on April 16 that the Kremlin is increasingly arresting Russian and proxy officers for failures in Ukraine.[3] The GUR reported Russian military authorities established a commission intended to run from March 2 to April 24 in occupied Horlivka to identify the reasons for personnel shortages among Russian forces. The GUR reported that Russian investigators discovered the commanders of Russia’s 3rd Motor Rifle Brigade was 100% staffed at the beginning of the invasion when it in fact only had 55% of its personnel and arrested two battalion commanders in the brigade. The GUR also reported the FSB arrested DNR Defense Spokesperson Eduard Basurin for his ”careless statement” on April 11 revealing Russian intent to use chemical weapons in Mariupol, though there is still no independent confirmation of the Ukrainian claim of Russian chemical weapons use.

Russian forces likely captured the Port of Mariupol on April 16 despite Ukrainian General Staff denials on April 17, and Russian forces have reduced Ukrainian positions in the city to the Azovstal factory and a few isolated pockets. Russian and DNR forces released footage on April 16 confirming their presence in several key locations in southwestern Mariupol – including the traffic control center of the port, the prosecutors building, and the Main Directorate of the National Police in Donetsk region – and have likely reduced the center of Ukrainian defense in southwestern Mariupol.[4] The Russian Ministry of Defense claimed on April 16 that Russian forces cleared the entirety of urban Mariupol and that “the remnants of the Ukrainian group are currently completely blocked on the territory of the Azovstal metallurgical plant."[5] Isolated groups of Ukrainian troops may remain active in Mariupol outside of the Azovstal factory, but they will likely be cleared out by Russian forces in the coming days and the Ukrainian General Staff’s claim at 6pm local time on April 17 that Ukrainian forces repelled a Russian assault on the port is likely false.[6]

Russian forces likely seek to force the remaining defenders of the Azovstal factory to capitulate through overwhelming firepower to avoid costly clearing operations, but remaining Ukrainian defenders appear intent on staging a final stand. Russian forces conducted heavy air strikes in Mariupol, including by Tu-22M3 strategic bombers, in the past 24 hours.[7] Ukrainian forces in the Azovstal factory refused a Russian ultimatum to surrender by 1pm local time on April 17.[8] The Russian Ministry of Defense claimed Kyiv denied Ukrainian forces the option to surrender and ordered Azov Regiment troops to shoot surrendering Ukrainian personnel, part of the Kremlin’s ongoing information operation to falsely portray the Ukrainian military as a minority of ”nationalists” forcing the rest of the military to fight on.[9] Russian forces will likely complete the capture of Mariupol in the coming week, but final assaults will likely continue to cost them dearly. 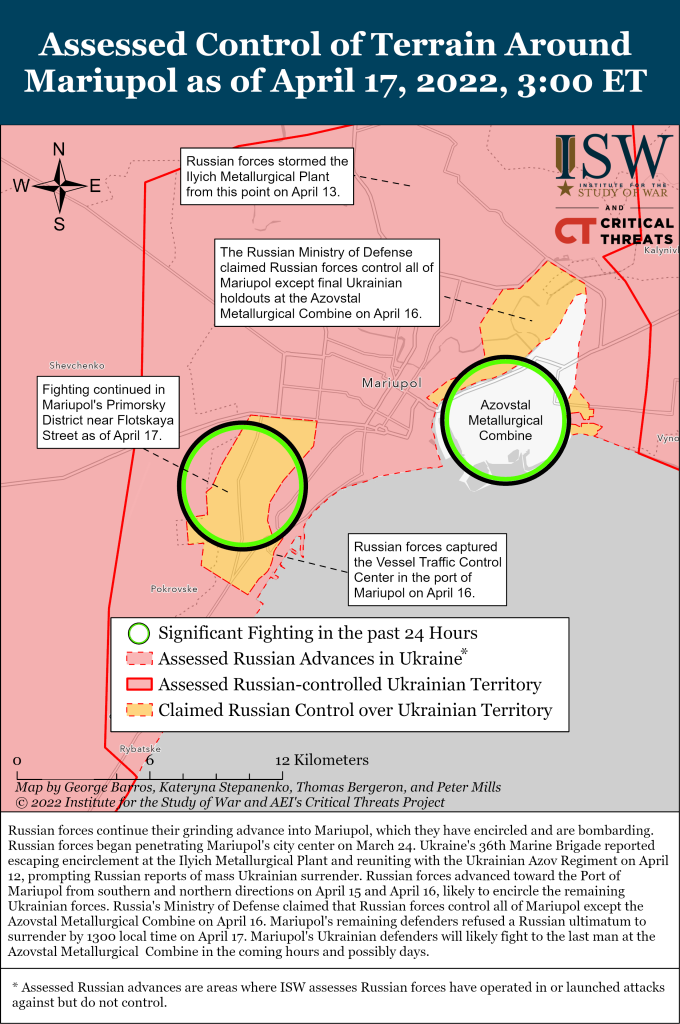 Russian troops continued attacks against Rubizhne Popasna, and Severodonetsk on April 17 without success.[10] Russian forces did not make any significant territorial gains in the last 24 hours.

Russian State Duma deputy Vitaly Milonov published a photo on VKontakte (a Russian social network) with Putin's close ally and financier of the Wagner Group Evgeney Prigozhin on April 17.[11] While ISW cannot verify the exact location of the photo of Milonov and Prigozhin, Milonov has shared photos of himself in Donbas in the past several days, and he presumably met Prigozhin somewhere in Donbas or near the Russian border. Prigozhin, who has no military experience and is the financier and organizer of Wagner Group rather than its military commander, is likely in Donbas to coordinate recruitment and financing of Wagner Group operations rather than to command combat operations.

Russian forces continued their build up around Izyum on April 17 but did not conduct any offensive operations.[12] Russian forces are increasingly attempting to leverage conscripts and proxy units in Izyum, indicating continuing challenges generating the forces necessary to encircle Ukrainian forces in eastern Ukraine. Social media users shared photos on April 16 of LNR personnel in Izyum, the first confirmed use of proxy troops (as opposed to the conventional Russian military) on the Izyum axis.[13] The Ukrainian General Staff reported on April 17 that Russian forces are attempting to mobilize Ukrainian civilians in Izyum (likely for manual labor rather than combat operations, as they have done elsewhere in occupied Ukraine), though ISW cannot independently confirm this report.[14] Russian forces continued to shell Kharkiv city in the past 24 hours, and Ukrainian forces did not conduct any counterattacks.[15] 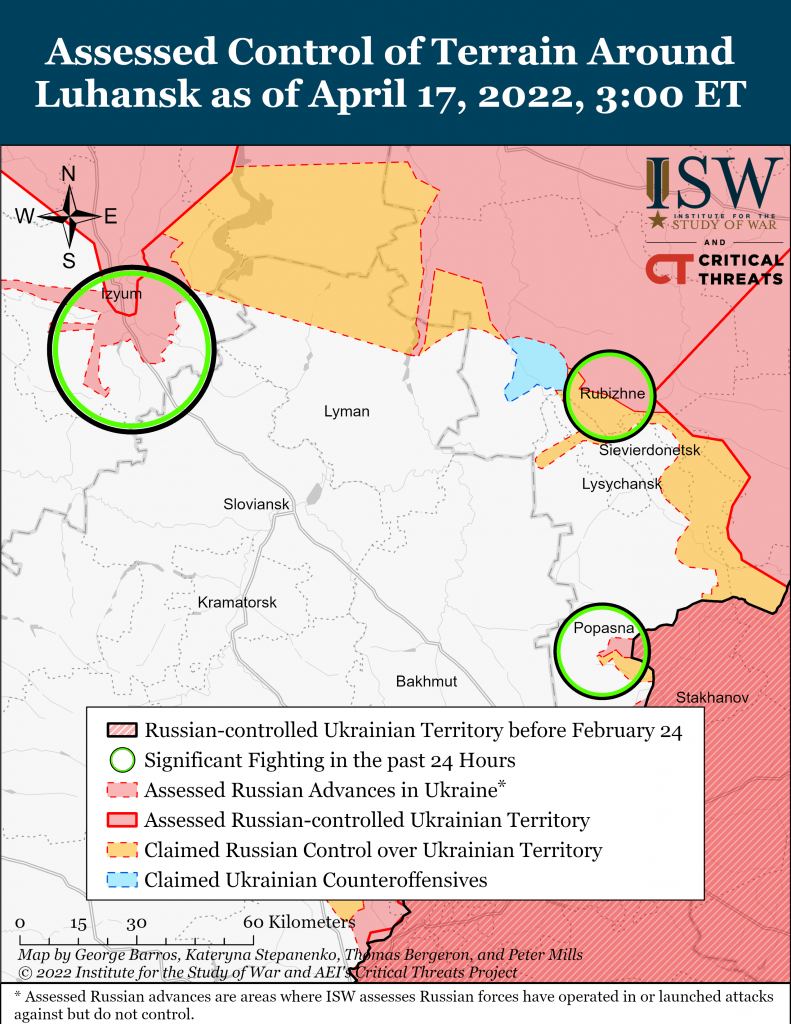 The Ukrainian Resistance Center (the Ukrainian Ministry of Defense’s headquarters to coordinate operations within Russian-occupied territory) reported on April 16 that Ukrainian artillery targeted and destroyed ten railcars of Russian ammunition in Tomak using intelligence provided by Ukrainian civilians.[16] ISW cannot independently confirm this claim, and will be unlikely to be able to confirm similar Ukrainian claims of partisan activity in the future, but increasing Ukrainian reporting on partisan actions in southern Ukraine at minimum indicates increasing Ukrainian attention to these operations.

There has been no significant change around Kherson in the past 24 hours, though minor fighting is reportedly ongoing in Oleksandrivka.[17] 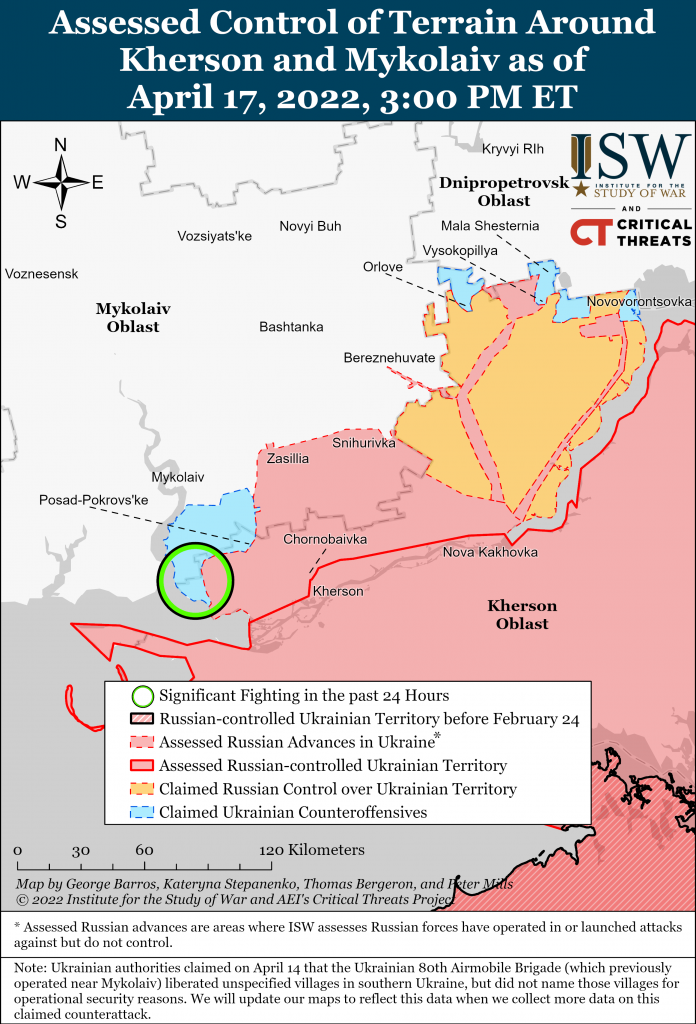