This piece is part of a series of al Shabaab leadership profiles.

Sheikh Hassan Dahir Aweys, a former leader of al Shabaab, turned himself in to the Somali government on June 26 following infighting within the group. Aweys was a senior leader in al Shabaab and was on the group’s Shura Council.[1] Previously, Aweys led Hizb al Islam until the group’s merger with al Shabaab in December 2010.[2] Aweys still maintains a large base of support from his influential Hawiye sub-clan and, to some extent, former al Shabaab fighters.[3] The United States Treasury Department’s Office of Foreign Assets Control (OFAC) added him to its Specially Designated Global Terrorist (SDGT) list on November 7, 2001 under the authority of Executive Order 13224.[4] The United Nations designated Aweys as a terrorist under Security Council Resolution 1267 on November 9, 2001, naming him an “individual associated with al Qaeda.”[5] 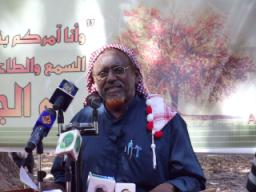 Aweys is from the Galgudud region, and is a member of the Ayr, a sub-clan of the Habar Gedir, which in turn is a sub-clan of the Hawiye clan.[6] In the 1990s, he led the military wing of the al Qaeda-linked al Ittihad al Islamiya (the Islamic Union, also known as AIAI).[7] In 1993, al Qaeda operatives allegedly approached Aweys and offered full operational and financial support to AIAI if he would direct attacks against American targets. He reportedly balked at the offer, arguing that “the time is not right to start conducting jihad.”[8] AIAI collapsed in the early 2000s, and the Islamic Courts Union (ICU) replaced it as the principal Somali Islamist group, rising to power in 2006.[9] Aweys served as the spiritual leader within the ICU as the head of the Shura Council, the group’s clerical body.[10] He fled to Asmara, Eritrea when Ethiopian troops drove the ICU out of Mogadishu in January 2007.[11] Aweys subsequently founded the Alliance for the Re-liberation of Somalia (ARS) with Sheikh Sharif Sheikh Ahmed, but their relationship soured when Ahmed began negotiating a peace deal with Ethiopia in Djibouti.[12] Aweys’s faction of the ARS rejected the Djibouti peace accord in June 2008, and he said he would refuse any negotiations outright “until [Somalia] is liberated from [Ethiopian troops].”[13] He returned to Somalia on April 23, 2009 as the leader of the nascent insurgent Islamist group, Hizb al Islam.[14]

Hizb al Islam suffered a number of military setbacks and defections after the failure of its joint Mogadishu offensive with al Shabaab in May 2009.[15] In July 2010, Aweys began a sustained campaign pressing for unity with al Shabaab, which he had done on and off since June 2009.[16] Aweys vocally supported al Shabaab’s 2010 Ramadan offensive. On September 2, 2010, he said, “The fighting cannot stop and no political breakthrough can be reached while foreign enemies stay in our homeland. We can think about dialogue and reconciliation when the foreigners withdraw.”[17] Aweys held a press conference with several al Shabaab leaders on December 23, 2010 to formally announce a merger between the two groups.[18]

Aweys has stated support for a shari’a-based state in Somalia, and refuses to recognize the current government because foreign powers support it.[19] His relationship with international aid groups has been inconsistent, varying between distrust and open hostility.[20] He has also publicly supported suicide bombings and the desecration of Sufi tombs and shrines.[21] Before Osama bin Laden’s death on May 1, 2011, Aweys pledged allegiance to him on several occasions and invited him and his al Qaeda militants to join the Islamist jihad in Somalia.[22]

Differences between Aweys and Godane emerged publicly in early 2012, following al Qaeda’s recognition of al Shabaab. (For more, see the profile of Godane.) Aweys rejected Godane’s interpretation of jihad in Somalia as limited to those forces led by Godane, and believed in limiting civilian casualties. By September 2012, these differences became irreparable and Hizb al Islam announced a split from al Shabaab on September 24.[23] Disagreements between the two men persisted and in April 2013, Aweys, along with other senior al Shabaab leaders Mukhtar Robow and Ibrahim al Afghani, issued a fatwa against Godane’s attempt to kill foreign fighters, including American fighter Omar Hammami. [24] On June 20 the situation turned violent and Aweys was forced to flee Barawe, Lower Shabelle region after al Shabaab infighting erupted. Aweys turned himself in to the Himan and Heb administration in central Somalia on June 26.[25] Aweys defected to the Somali government shortly after with promises of immunity, but is currently still being held in prison in Mogadishu.[26] The Somali government has not released any statements saying what they plan to do with the former al Shabaab leader.

May 17, 2013: Hassan Dahir Aweys released an audio message speaking about the rift between Omar Hammami and al Shabaab leader Ahmed Abdi Godane siding with Hammami and telling Godane’s followers that Godane’s commands must be “disobeyed.” (SITE)

February 2, 2013: Aweys released a message saying Hizb al Islam was not responsible for the February 15 killing of a sheikh in Garowe, Nugaal region and expressed sympathies to the family of the deceased. (Sabahi Online)

March 30, 2012: Disagreements between al Shabaab’s leader, Ahmed Abdi Godane, also known as Mukhtar Abu Zubair, and Aweys became public. Godane had declared that no jihadist group, other than al Shabaab, should be established in Somalia. Aweys disagreed, saying, “One cannot limit or make jihad a membership, jihad is open to everyone who is willing to fight.” (Garowe Online)

November 6, 2011: Aweys spoke at an Eid al Adha prayer in the Alamada area outside Mogadishu, admitting to the crowd that most of Somalia’s clans are backing the TFG and regional governments over al Shabaab. He also condemned the Ogaden National Liberation Front, an Ethiopian militant group, for signing a peace agreement with the Ethiopian government. (Radio Bar-Kulan)

August 12, 2011: Aweys claimed al Shabaab withdrew from Mogadishu due to divisions among the group’s leadership, and he argued the group’s tactics in the city were flawed. “We don’t have tanks, and it’s wrong to have face to face fighting with troops armed with tanks,” he said. (Mareeg Online)

July 8, 2011: Aweys accused Arab states of neglecting Somalia’s increasingly dire humanitarian crisis, exacerbated by a recent drought. He reversed his previous position against international aid agencies, claiming that donors ceased providing aid over a misunderstanding. “Everyone who intends to deliver humanitarian assistance is very welcome in areas we control,” he said. (All Headline News)

July 3, 2011: Aweys published an opinion piece arguing that the ouster of Transitional Federal Government (TFG) Prime Minister Mohamed Abdullahi Mohamed was a corrupt bargain and evidence of a foreign conspiracy against the Somali people. “The fig leaf has fallen and the people realized that the president and the president of his parliament and all of heads of brigades and those who are behind the Burundian and Ugandan tanks don’t work for the good of the Muslim Somali people; rather, they work to please their African and Western masters and to fulfill their needs through looting and selling the religion and the country for a cheap price,” he wrote. (SITE)

May 23, 2011: Aweys told merchants in Mogadishu’s Bakara Market that they should take up arms and defend their businesses against the attacks of government and African Union Mission in Somalia (AMISOM) forces. (Shabelle Media Network)

May 12, 2011: Aweys attended a meeting in Afgoi with other top officials in al Shabaab to discuss the death of Osama bin Laden. They issued joint praise for bin Laden and vowed retaliation for his death. (Mareeg Online)

March 18, 2011: Aweys attended a meeting in Mogadishu with local elders of the Mudulood clan and other senior al Shabaab members. They discussed clan support for al Shabaab’s fight against the TFG and African Union forces. He also addressed a crowd in the Elasha Biyaha camps outside Mogadishu, defending al Shabaab’s use of child soldiers. “We recruit underage children to fight for us, the children are ready to die for their country and religion,” he said. (Garowe Online, Shabelle Media Network)

March 4, 2011: Aweys spoke to a crowd at a mosque in Afgoi and told them he would continue fighting against the TFG and African Union troops until he died. (Shabelle Media Network)

January 21, 2011: Aweys told Somalis suffering from the recent drought to be wary of foreign aid groups, claiming the groups had a secret Christian agenda. “There are Christian stamps on foreign food packages carrying messages aiming to Christianize our community,” he said. (Mareeg Online)

December 29, 2010: Aweys told Uganda and Burundi to withdraw their troops fighting in Somalia with AMISOM. "Pull out your troops or they will return to you dead,” he said. (Garowe Online)

December 28, 2010: Aweys called on al Shabaab to collect funds for the support of drought victims throughout south and central Somalia. (Mareeg Online)

December 27, 2010: Aweys publicly discussed the merger of Hizb al Islam and al Shabaab, confirming that he and his group would fight under the al Shabaab name against AMISOM. “We have united for the sake of our ideology and we are going to redouble our efforts to remove the government and the African Union from the country," he said. (AP)