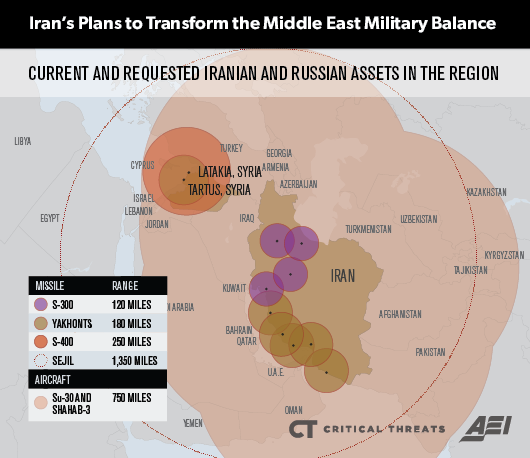 Media reports suggest that Iran has taken delivery of parts of the S-300 air defense system from Russia.  This system would greatly complicate Israel’s ability to conduct air strikes against Iran, and would make it harder even for the U.S. to do so.  But Iran has also given Russia a shopping list of other military hardware it desires to purchase, including the Su-30 air superiority fighter-bomber (similar in characteristics to the American F-15E Strike Eagle), and the Yakhont supersonic anti-shipping missile system.

Iran’s acquisition of any of these systems would be significant, but its acquisition of all of them could be game-changing.  It could give Iran the ability to compete militarily with Saudi Arabia, the United Arab Emirates, and even Turkey and possibly Israel for the first time since the Iranian Revolution in 1979.  It could even make it difficult or impossible for the U.S. to maintain aircraft carriers or large-deck amphibious ships in the Persian Gulf.

This graphic shows the ranges of the various weapons systems Iran has requested from Russia.  A handful of Yakhont batteries, which are truck-mounted and therefore mobile and hard to track, can cover the entire Persian Gulf with missiles against which American ships cannot reliably defend themselves.  Four S-300 launchers (which the Iranians have already purchased from Russia and are waiting for their delivery) provide wide coverage against an Israeli air attack.  The combat radius of the Su-30 covers almost the entire Middle East.

The graphic also shows the two systems Russia has already deployed in Syria at Latakia and Tartus, which will likely remain there indefinitely.  If Russia chose to support Iran in efforts to deny the U.S. or its allies easy access to the region, these systems would form an important part of the overall defense.

Each system would be problematic by itself.  Taken together they form the basis of a real access denial capability that could fundamentally alter the correlation of forces in the region.