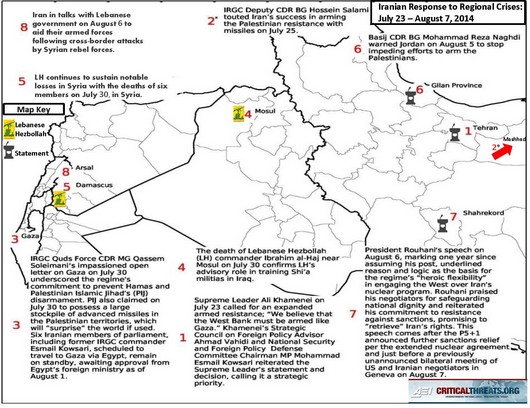 IRGC Quds Force Commander Qassam Soleimani will continue to focus his Iraq campaign on protecting the al Askari Shrine in Samarra, stabilizing Diyala Province, strengthening defenses of Baghdad and weighing the impact of potential U.S. military actions, while coordinating with Iraqi and Iranian political leaders to navigate the transition from Prime Minister Maliki . The Islamic State’s major push to expand and consolidate its position in Syria while holding its gains in Iraq may push the IRGC and Lebanese Hezbollah to halt further realignment of their forces and proxies towards Iraq and maintain their military support of President Assad in creating a frontline against IS in Syria. Iran will strongly resist and attempt to disrupt any efforts to disarm Hamas as part of any permanent cease-fire agreement over Gaza. Primarily through its proxy, Palestinian Islamic Jihad, the IRGC will attempt to expand the arming of affiliated organizations in the West Bank to increase its leverage on the ground, better deter Israel, and reclaim leadership on the Palestinian cause.