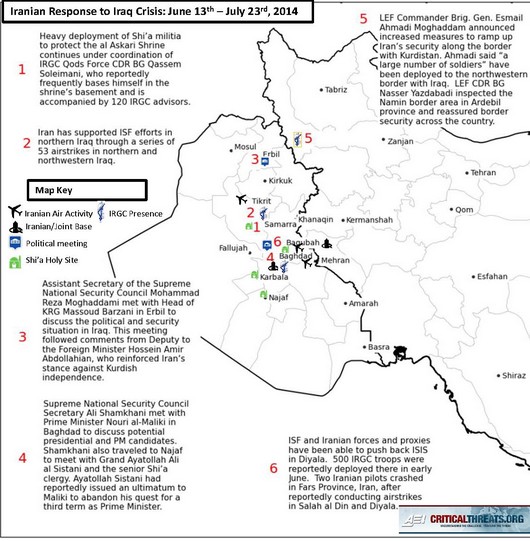 Deployed IRGC forces and advisers, led by Quds Force Commander Qassem Suleimani continue their efforts to shore up ISF, protect Shi’a shrines, and coordinate activities throughout central Iraq against IS. Suleimani will focus his campaign on further stabilizing Diyala, protecting the al Askari Shrine in Samarra and strengthening defenses of Baghdad and surrounding areas. With Iraq as the primary focus, the IRGC will continue to draw down assets and proxy forces from the Syria theater.  Iranians will conditionally back Maliki as long as it looks like he can survive as prime minister despite pressure to replace him. Tehran will also reinforce political and implied military pressure to stem any efforts towards Kurdish independence. The latest round of nuclear negotiations ended with Iran and the P5+1 extending the deadline for an agreement to late November. Iranian negotiators will likely insist on retaining core nuclear capabilities, including current enrichment capacity, and will seek to limit the duration of a deal in order to build out an increasingly robust nuclear weapons capability in the future.