The ongoing anti-regime protests in Iran reached their three-month anniversary on December 16. Countrywide demonstrations and strikes are continuing to shake the Iranian regime, presenting it with one of the most existential threats it has faced since the Iran-Iraq War in the 1980s. The continuation of this popular uprising is particularly impressive given the immense effort the Iranian regime has made to brutally suppress the movement. Its resilience is a testament to the tremendous bravery, courage, and determination of the Iranian protesters. CTP has produced daily updates on these protests and their evolution since September 2022.[i] We present here a series of visualizations produced from the open-source data that we have gathered over the past three months to further inform the public discourse on this important moment in Iranian history.

Note: The data presented below is based on the number of distinct cities in which protests occurred that met CTP’s thresholds for size and evidence on a given day. There are frequently multiple distinct protests in Tehran and sometimes other cities; this data therefore does not reflect the total number of protests that met CTP’s threshold on a given day, only the number of cities in which they occurred. 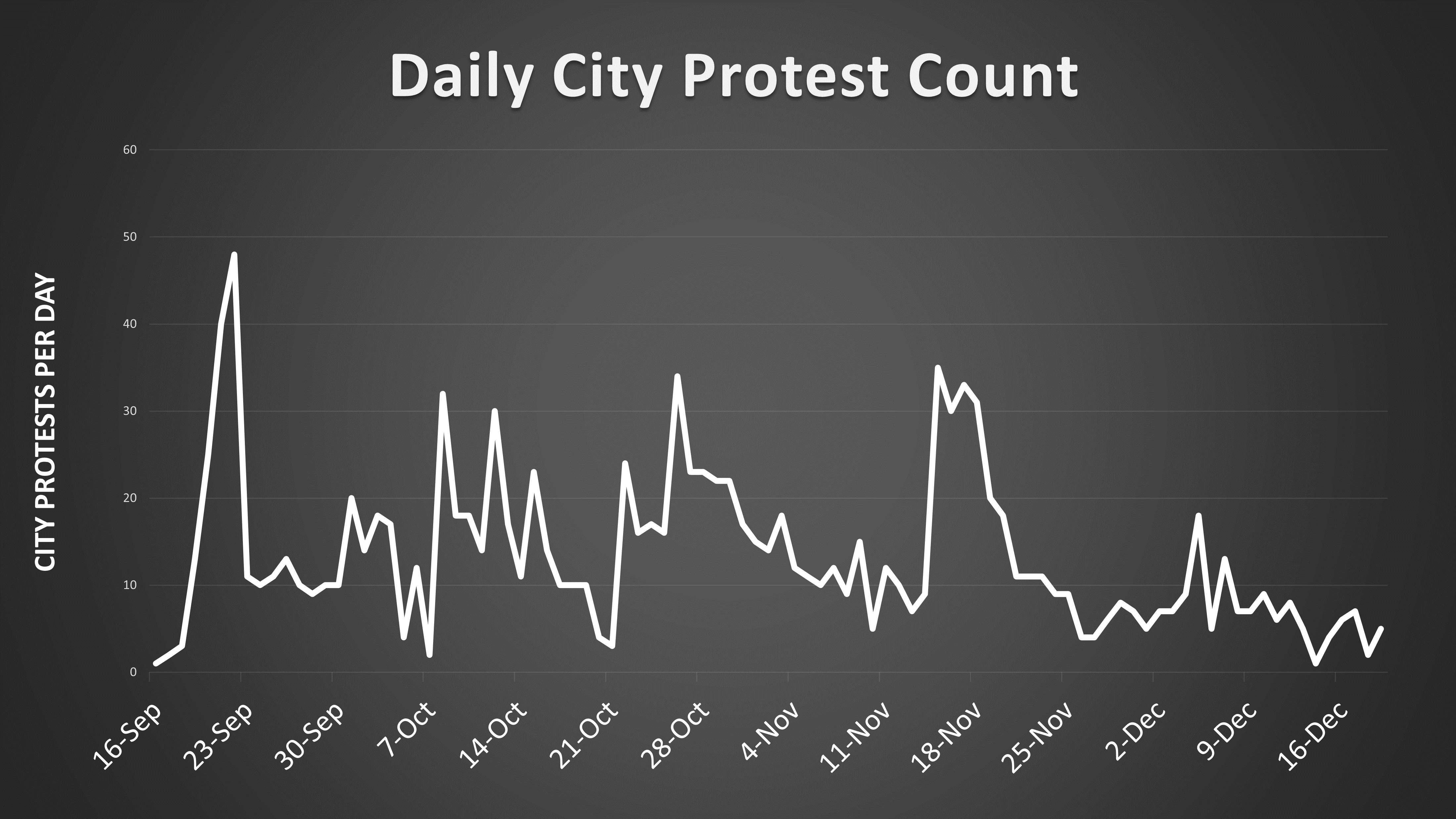 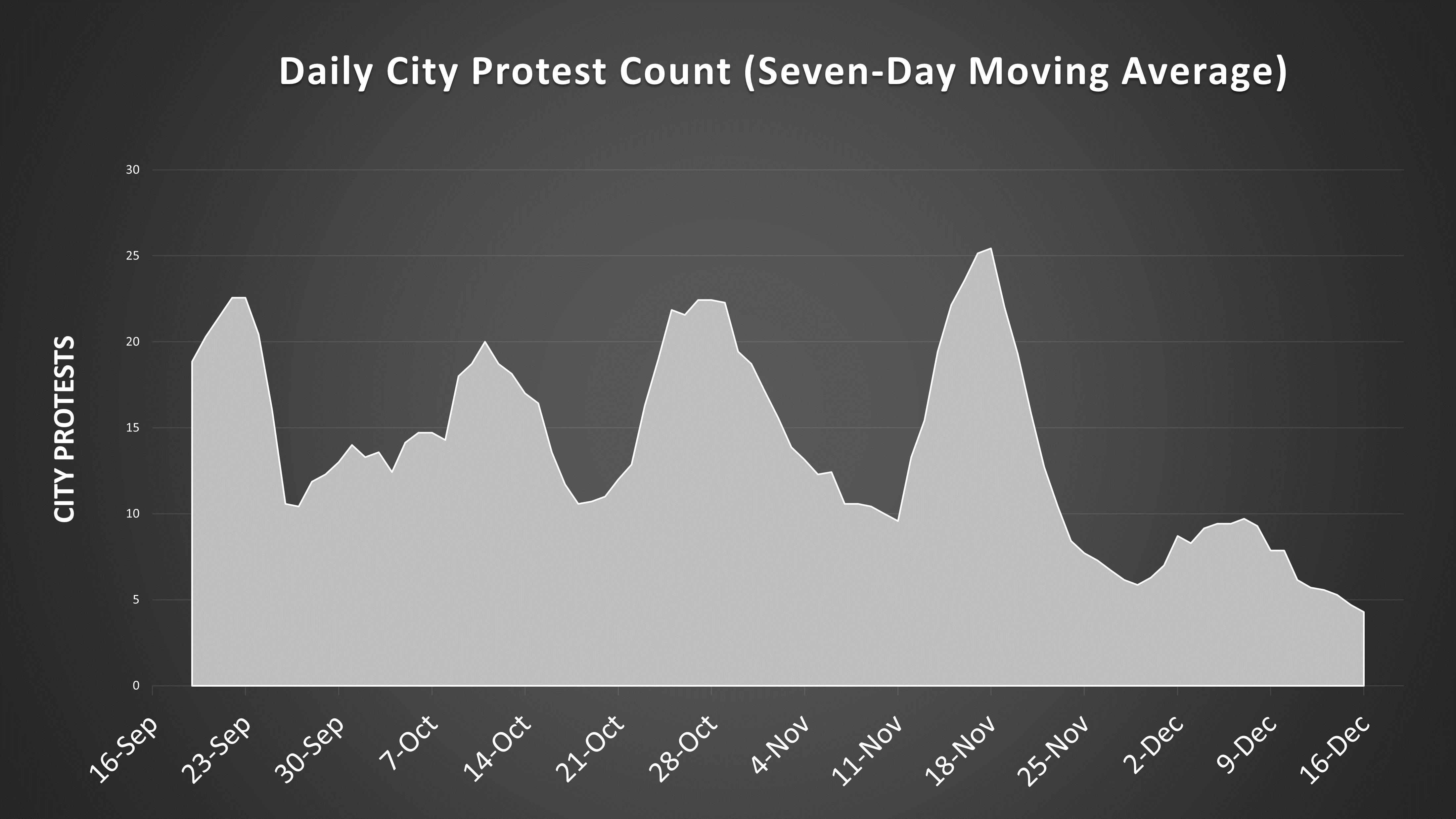 This movement has seen several significant spikes in protest activity around dates specified by protest organizers followed by relative lulls. Protest coordinators and organizations have shown an impressive ability to generate demonstrations and strikes on preplanned dates throughout this movement.[ii] October 26—the 40th day since Mahsa Amini died—saw thousands of Iranians take to the streets to commemorate her following calls from numerous protest organizers.[iii] Protests have continued even during the relative lulls, however. CTP has not recorded a single day with no protests since September 16. 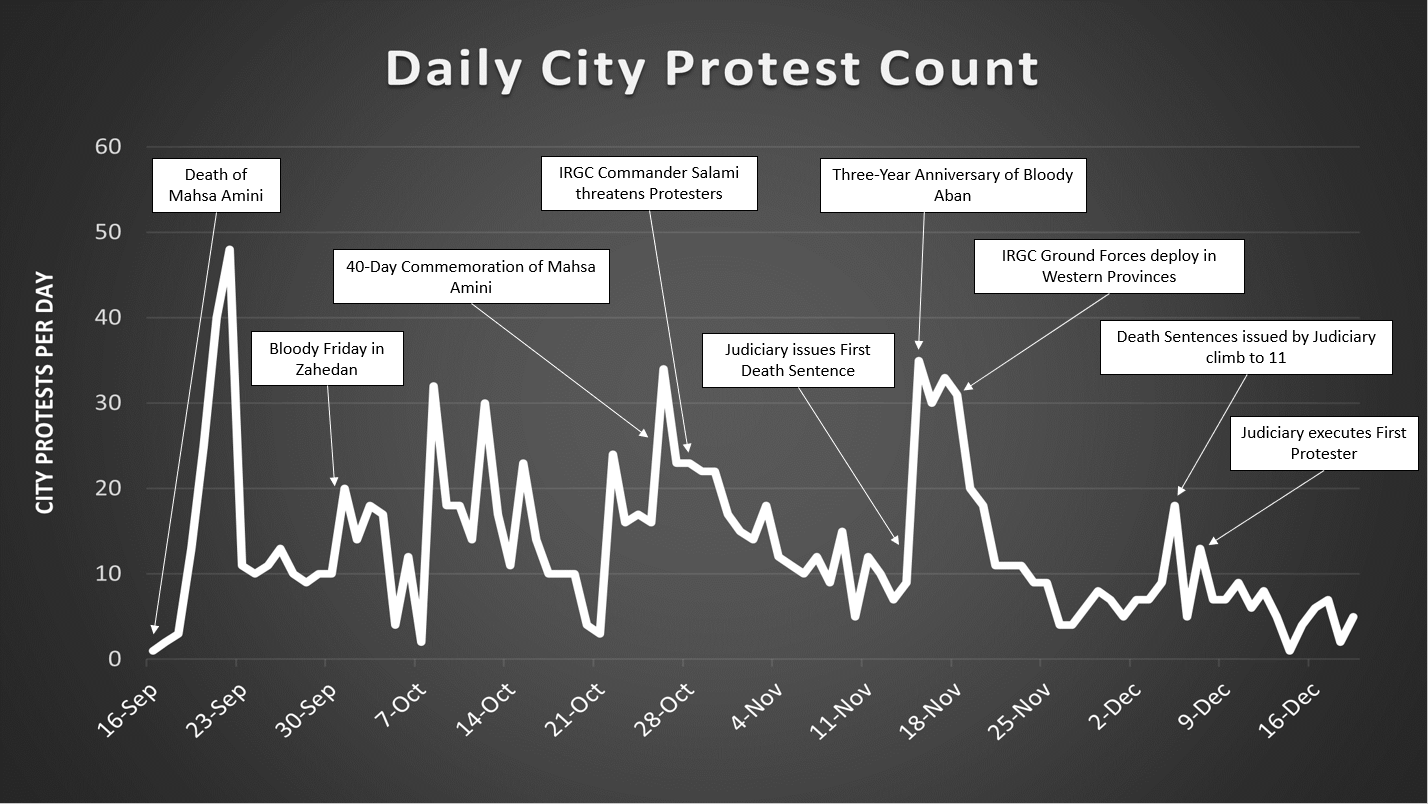 Protest activity has decreased gradually since mid-November. Protest coordinators and organizations have planned countrywide demonstrations on several occasions since then but failed to achieve previous levels of turnout.[iv] Several factors have likely contributed to this diminishing turnout. The Iranian regime has significantly escalated its protest crackdown since mid-November. The regime issued its first death sentence on November 13 and deployed the IRGC Ground Forces in Kurdistan and West Azerbaijan provinces beginning on November 19.[v] These IRGC units likely used extreme levels of force to quash protests. These escalations—combined with the colder weather, executions, mass arrests, and possible disorganization among protest coordinators—have very likely contributed to the declining turnout over the past month.

This reduced protest activity does not, however, indicate the end of the anti-regime movement. The regime may have been able to diminish protest activity through its use of intimidation, force, and expanding censorship. But the regime will struggle to sustain this level of oppression indefinitely, especially given the degree to which this crackdown has strained the state security apparatus. Protest coordinators and organizations are contrastingly exploring ways to sustain regular acts of political defiance and have been forming the requisite networks and infrastructure for months.[vi] Observed protests may thus become a less-useful indicator for understanding the anti-regime movement in the weeks and months ahead.

A significant portion of protests have occurred in cities in four provinces: Tehran, Esfahan, Kurdistan, and West Azerbaijan. These provinces account for almost 40 percent of all locations in our overall protest city count. 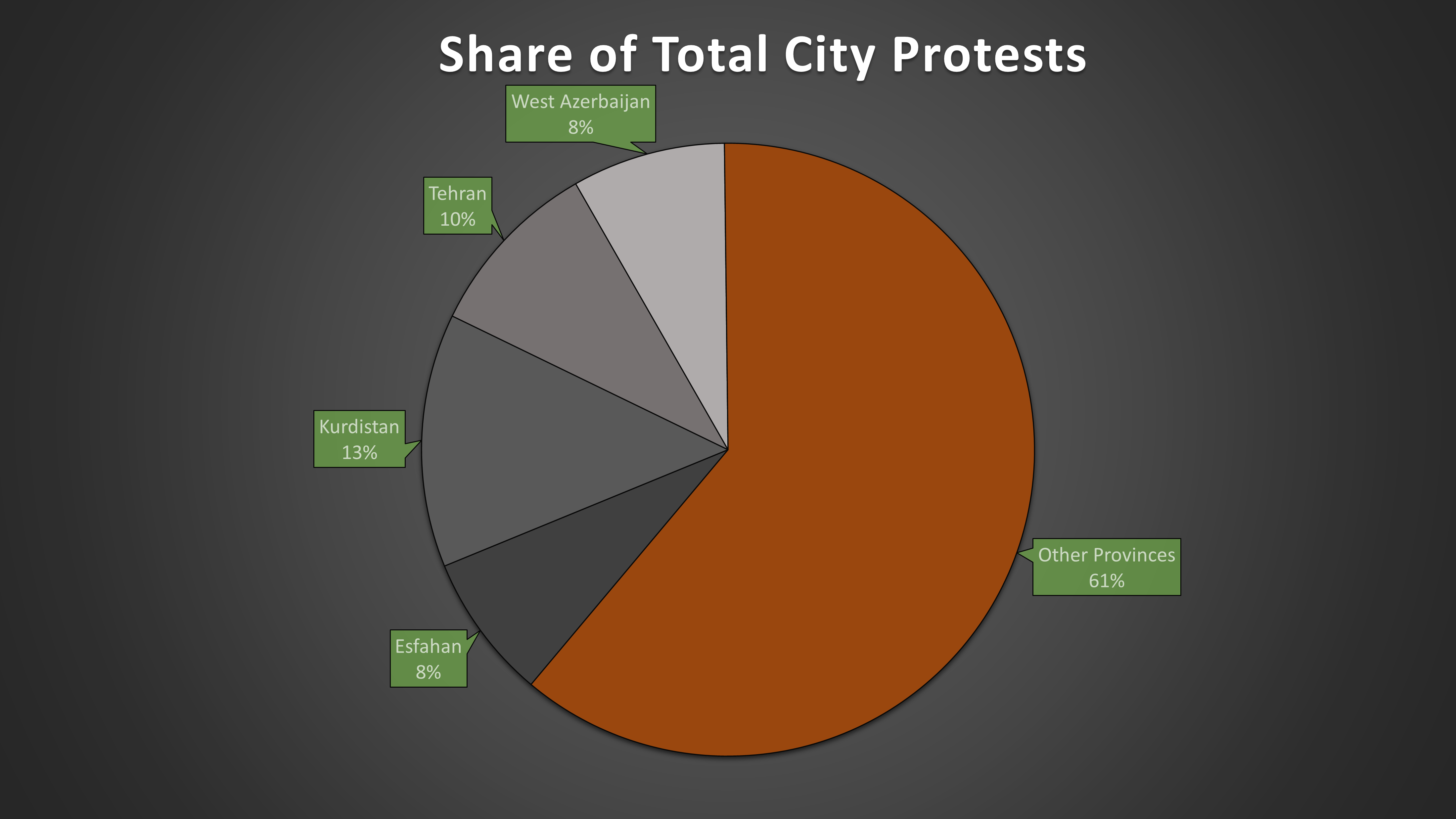 At least two factors are likely contributing to this phenomenon. Tehran and Esfahan are among Iran's most populous provinces and may thus have a greater number of protesters living there.[vii] This protest movement has resonated particularly among the Iranian Kurdish communities in Kurdistan and West Azerbaijan provinces. Mahsa Amini herself was a Kurd born in Saghez, Kurdistan Province.

The remaining provinces fall roughly into two other tranches. The middle tranche includes other major population centers, such as Khorasan Razavi Province, and border regions, where anti-regime sentiment is high and marginalized ethnic populations are concentrated. 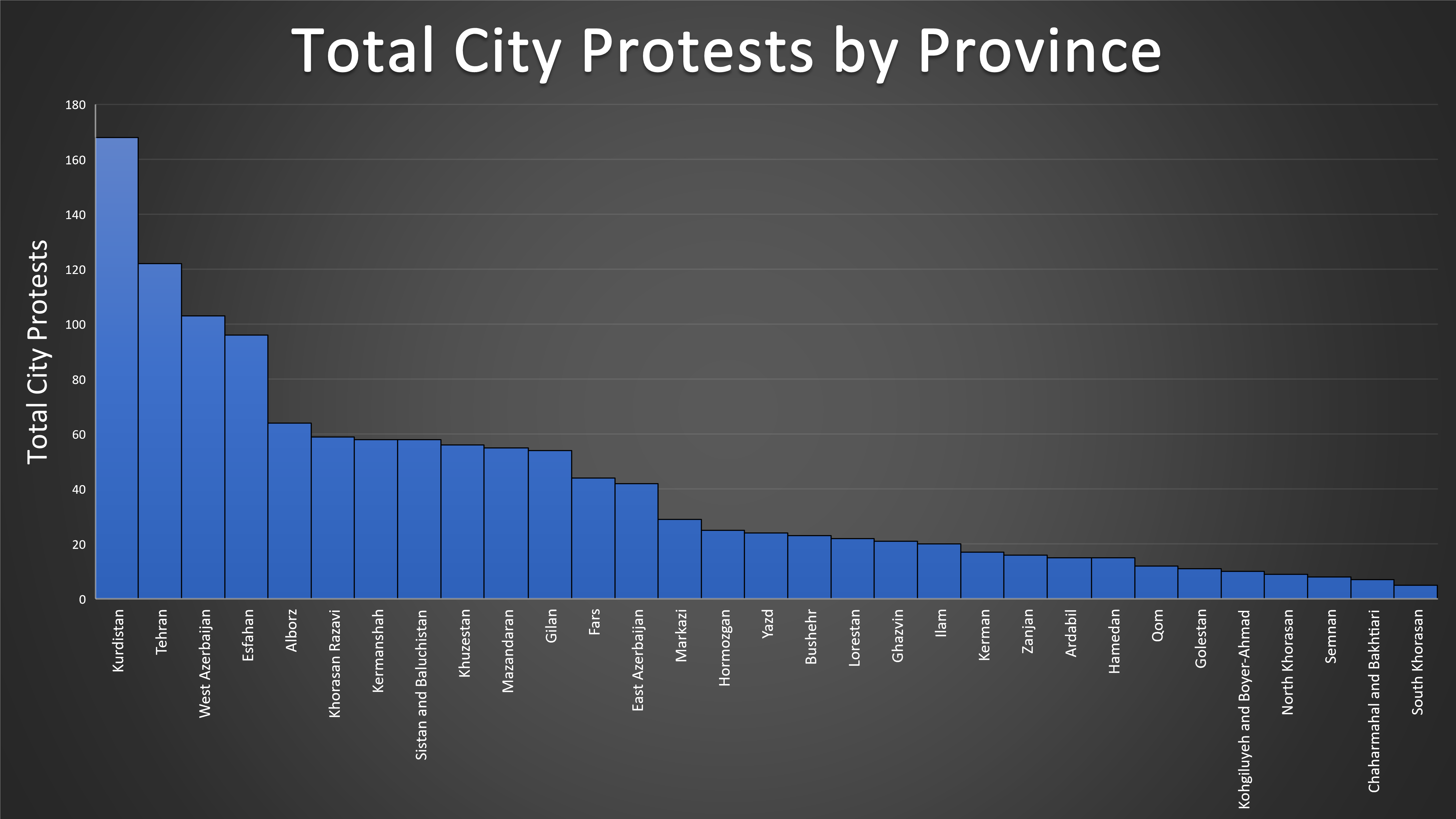 The number of cities protesting varies significantly by day of the week and by province. Wednesdays, Thursdays, and Saturdays generally have the greatest protest turnout across the entire country. Mondays and Fridays generally have the lowest. There are geographic exceptions, however. Sistan and Baluchistan Province, for instance, has more protests on Fridays than any other day of the week. Prominent Sunni cleric Moulana Abdol Hamid has become an increasingly vocal critic of the regime in recent months and uses his Friday sermons in Zahedan—the provincial capital—to inspire demonstrations throughout the province.[viii] 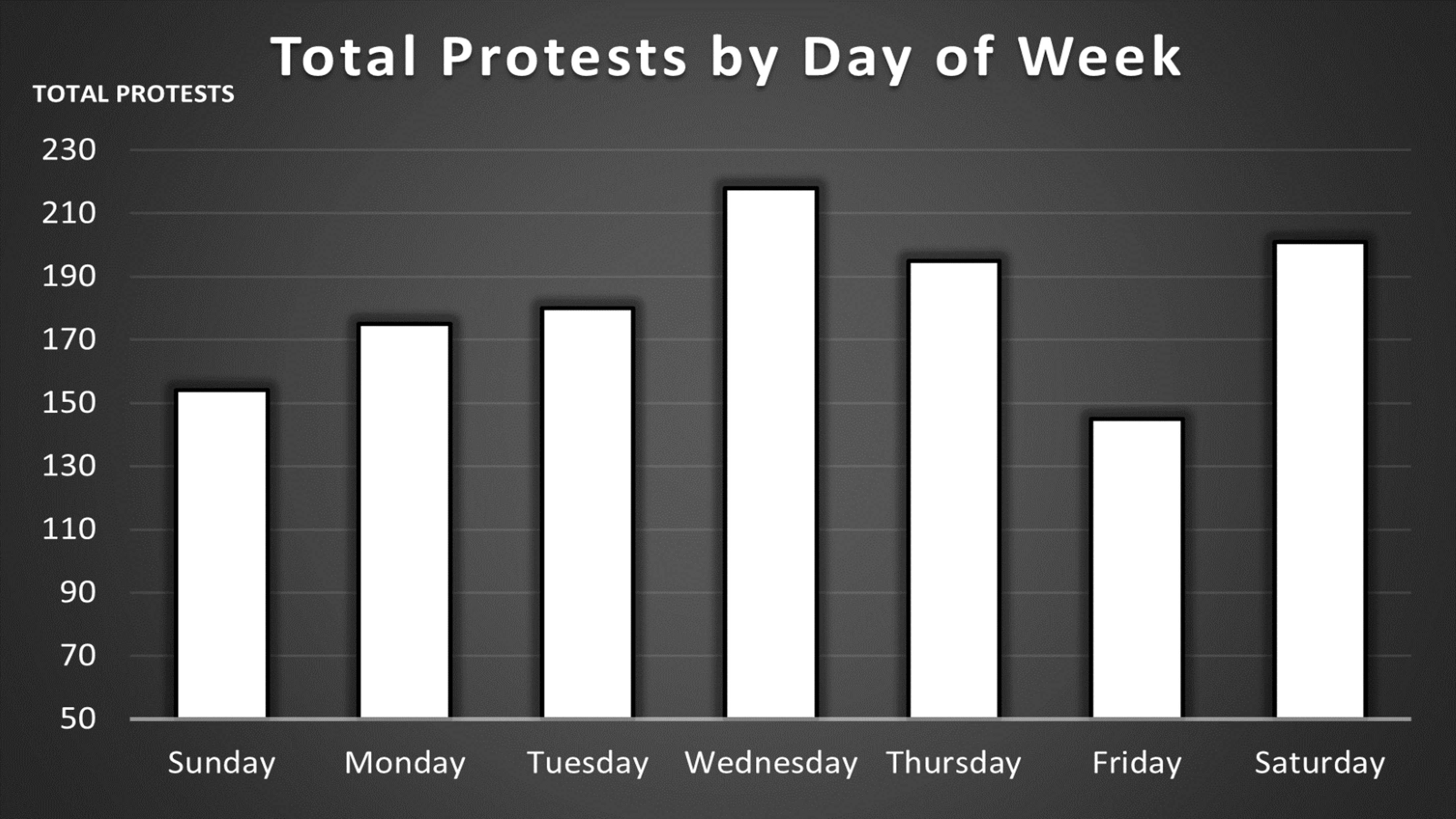 CTP will continue to update our assessments and data visualizations as the anti-regime movement in Iran continues to evolve. Follow the daily updates produced by CTP and the Institute for the Study of War for more analysis and information.