George Barros
Originally published in Institute for the Study of War 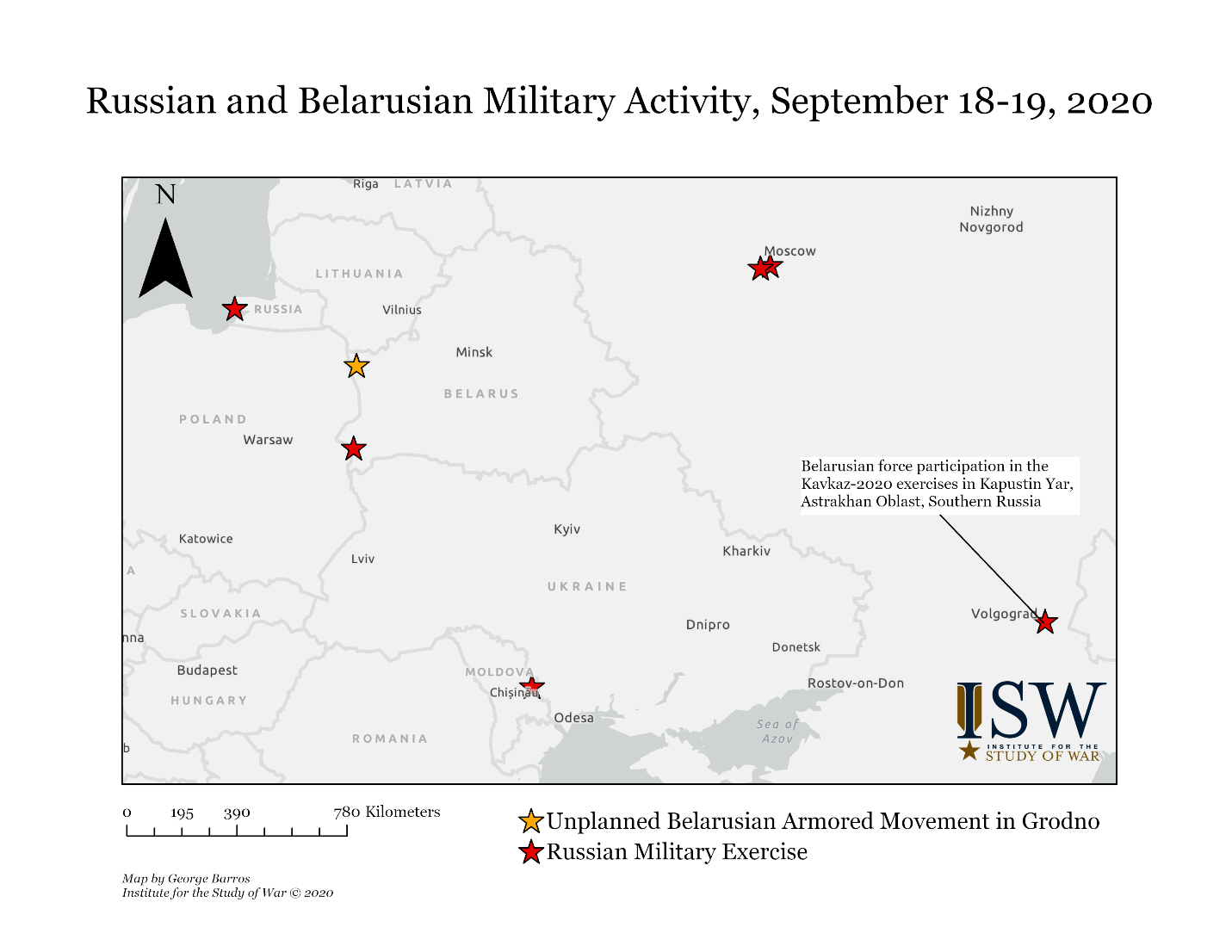 ISW has observed a larger-than-anticipated number of unscheduled Russian exercises in the vicinity of Belarus. The Kremlin expanded its Slavic Brotherhood exercises in Belarus, conducted at least three other separate battalion-level exercises in the WMD, only one of which could be connected to preplanned exercises, and conducted likely unscheduled Baltic coast reconnaissance missions ostensibly aimed against NATO.

The Kremlin is using the Slavic Brotherhood exercise in Brest, Belarus, to practice integrating Belarusian and Russian units to form a single combined unit – such unit integration is likely a key component of the Kremlin’s desired Union State integration. Russia’s 234th Guards Airborne Assault Regiment – a subordinate unit of Russia’s 76th Guards Air Assault Division that fought and sustained losses in Donbas in August 2014 – has performed a series of exercises focusing on interoperability with Belarusian forces since September 17.[1] The 234th likely formed a joint Russian-Belarusian battalion-sized unit to execute these exercises.[2] This exercise can prepare Russian and Belarussian forces to form a single combined armed force after the completion of Union State integration. It could also prepare Russian forces to subsume elements of Belarusian combat units in the event of a Russian intervention against the will of the Belarusian government.

The Kremlin is conducting at least three other separate battalion-level exercises in the Western Military District (WMD), only some of which are connected to preplanned exercises.

These exercises in Transnistria may relate to Moldova’s upcoming November 1 presidential election when Kremlin ally Igor Dodon will seek re-election. The Kremlin could also use these exercises to increase military pressure against Ukraine aimed at extracting political concessions from Ukrainian President Volodymyr Zelensky in Kyiv’s stalled peace talks with the Kremlin’s proxies in Donbas.

Two Russian mechanized battalions held likely snap exercises in the WMD on September 19. A battalion of the Kantemir Tank Division of Russia’s First Tank Army held exercises in the Moscow region on September 19.[9] Troops drove armored combat vehicles though water obstacles and simulated operations in flooded vehicles.[10] The forces practiced using isolation gear to protect against chemical weapons.[11] There is no evidence this exercise was preplanned.

Russian forces in the WMD may be preparing to perform crowd control operations in Belarus or elsewhere. A motorized rifle battalion of the Taman Division of Russia’s First Tank Army held likely unplanned exercises in the Moscow region on September 19.[12] These exercises simulated an encirclement maneuver to compel the surrender of an unmechanized enemy infantry force without destroying said force. The intended target of these exercises may be Belarusian (or other) protesters, but there is no evidence to support that hypothesis other than the odd nature of the exercise.

The Kremlin may attempt to destabilize NATO with hybrid operations in the Baltics if the Kremlin achieves freedom of movement in Belarus. A Baltic Fleet sapper company conducted forced-entry preparation exercises on the Baltic Sea coast in Kaliningrad on September 19. The sappers performed anti-mine engineering reconnaissance on Baltic coast landing sites.[13] There is no evidence this exercise was preplanned.[14]

A Belarusian battalion-sized unit is participating in Russia’s Kavkaz-2020 exercises in the SMD.[15] Approximately 350 unspecified Belarusian personnel and approximately 30 Belarusian tanks arrived in Kapustin Yar, Astrakhan Oblast, in Russia’s SMD, on September 16 for preplanned Kavkaz 2020 exercises.[16] The Belarusian forces should return to Belarus after Kavkaz-2020 ends on September 26. The Kremlin, however, will very likely send additional Russian forces into Belarus after Kavkaz-2020 under the pretext of continuous monthly exercises.[17]

Lukashenko ostentatiously deployed armor in Grodno to intimidate Belarusian protesters there. Approximately 40 Belarusian armored combat vehicles drove though Grodno’s streets in the late night of September 18.[18] This movement was not part of any prescheduled Belarusian or Russian exercise. These units are likely from Belarus’ 6th Armored Brigade, which is based in Grodno.[19]