George Barros
Originally published in Institute for the Study of War

Lukashenko held an unannounced reinauguration ceremony to surprise the Kremlin on September 23. Lukashenko reinaugurated himself in an unannounced small ceremony in Minsk on September 23.[1] Kremlin Spokesman Dmitry Peskov did not have a prepared statement on the inauguration. When questioned Peskov stated he did not know about the inauguration in advance and reluctantly stated Lukashenko made an “absolutely sovereign” decision.  Peskov refused to make further comments.[2] Peskov normally has prepared statements for such developments.

Lukashenko surprised the Kremlin likely to set conditions for himself to rule another full presidential term – potentially against Putin’s plans. The Kremlin has repeatedly expressed desires for constitutional reforms.[3] Kremlin-linked opposition leaders and a Kremlin-linked Belarusian presidential candidate Lukashenko jailed have called for constitutional reforms.[4] The continued absence of a Kremlin endorsement for another Lukashenko term may indicate the Kremlin is maintaining the option to broker a transition of power from Lukashenko to a different actor, potentially though Belarusian constitutional amendments.

Russia will likely increase pressure against Lukashenko to achieve its desired concessions in Belarus. The Kremlin seeks to establish suzerainty over Belarus by formalizing the Union State and integrating Belarusian political and military structures with those of Russia. Putin deployed a regiment-sized force to Belarus under the rubric of the Slavic Brotherhood exercises and likely secured additional military and economic Union State integration concessions from Lukashenko at their meeting in Sochi on September 14.[5] Lukashenko’s decision to surprise the Kremlin with his reinauguration indicates that Lukashenko believed Moscow would not support it. The lukewarm Russian response supports that view. Lukashenko’s actions and Moscow’s caution indicates that Putin still has unmet demands of Lukashenko, which is concerning considering how much ground Lukashenko has already ceded to the Kremlin.

The Kremlin flew more long-range bombers toward NATO airspace as part of the Slavic Brotherhood exercises on September 23. Six long-range supersonic Tu-22 bombers from the Shaikovka airfield in Tver flew across Belarus, and struck targets on the Ruzhansky firing range in Baranovichi, Brest, on September 23.[6] This flight– like that of two Tu-160M nuclear-capable supersonic strategic bombers on September 22 – was likely meant as a message to NATO. 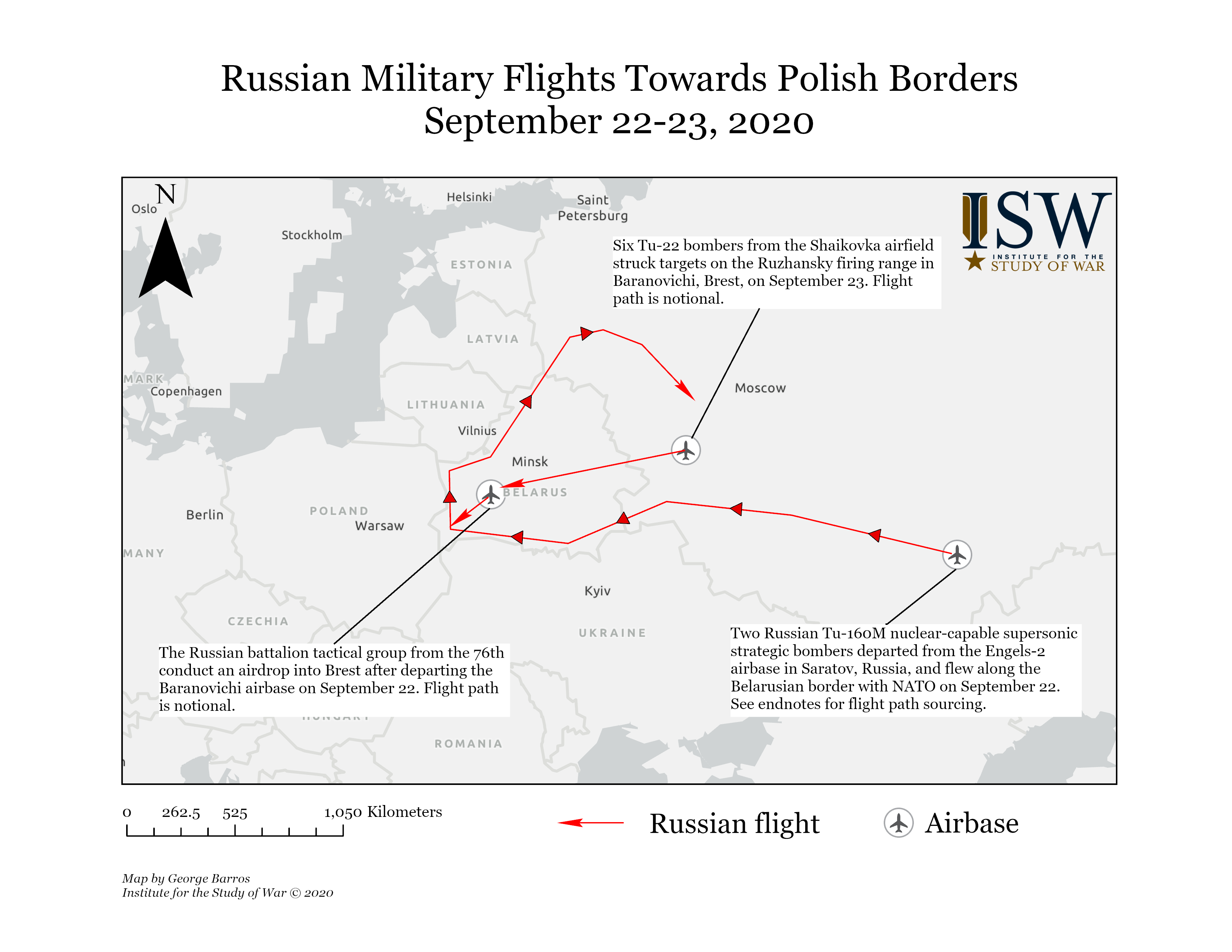 The Russian Air Force may violate sovereign NATO airspace in Poland or Lithuania. Russian forces have been executing airborne and flyover operations in Belarus immediately next to the Polish border since September 21. These activities all have Russian combat or transport aircraft flying from bases in Russia and Belarus directly toward the Polish border and ending close to it. Russian aircraft periodically violate the airspace of other European states, including NATO members.  Russian military aircraft last violated NATO airspace over Denmark on August 28.[8] Russian military and civilian aircraft have violated NATO sovereign airspace in Lithuania and Estonia no fewer than 12 times since 2017.[9] The most recent exercises may presage similar violations of Polish airspace from Belarus in the future.

Russia’s battalion tactical group from the 217th Airborne regiment of the Ivanovo-based 98th Guards Airborne Division is operating in Brest as of September 23.[10] This element’s area of operation in Belarus was previously unclear.

Regiment-sized elements of a Combined Arms Army, presumably the 6th Combined Arms Army (CAA), concluded exercises in the WMD on September 23. A force of approximately 1,200 personnel used multiple launch rocket systems, self-propelled howitzers, and anti-tank missile systems to destroy full-sized targets of enemy armored vehicles at firing ranges in Smolensk and Ryazan.[11] The fire elements used radar, optical-electronic, and artillery sound ranging to hit targets. Approximately 5,000 personnel of the 6th CAA began a week-long command and control exercises in the WMD on September 21 – these exercises in Smolensk and Ryazan were likely a component of the larger exercises that began on September 23.[12] The Kremlin could intend these exercises as a message to Lukashenko, or preparations for potential Russian military undertakings in various contingencies. ISW does not yet have a basis to assess the command echelon at which these exercises are being held; 5,000 troops is likely more than a single regiment or brigade, but could reflect a regiment‘s worth of combat forces with higher-echelon command, control, and support troops.