One World Trade Center and The Tribute in Lights is seen in Lower Manhattan in New York, September 11, 2013. REUTERS/Gary He

Al Qaeda and ISIS: Existential Threats to the U.S. and Europe

This report is part of the series, U.S. Grand Strategy: Destroying ISIS and al Qaeda. 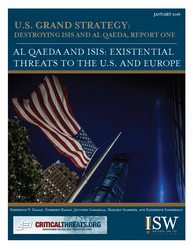 The Institute for the Study of War (ISW) and the Critical Threats Project (CTP) at the American Enterprise Institute conducted an intensive multi-week exercise to frame, design, and evaluate potential courses of action that the United States could pursue to defeat the threat from the Islamic State in Iraq and al Sham (ISIS) and al Qaeda in Iraq and Syria. The planning group weighed the national security interests of the United States, its partners, its rivals, and its enemies operating in or influencing the conflicts in Iraq and Syria.It considered how current policies and interests are interacting in this complex environment. It identified the minimum endstates that would satisfy American national security requirements as well as the likely outcomes of current policies. The group also assessed the threat posed by al Qaeda and ISIS to the United States, both in the immediate and long term, and tested the probable outcomes of several potential courses of action that the United States could pursue in Iraq and Syria.

ISW and CTP will publish the findings of this exercise in multiple reports. This first report examines America’s global grand strategic objectives as they relate to the threat from ISIS and al Qaeda. It considers the nature of those enemy groups in depth and in their global context.   The second report will define American strategic objectives in Iraq and Syria, along with those of Iran, Russia, Turkey, and Saudi Arabia, and will articulate the minimum required conditions of military-political resolutions to conflicts in Iraq and Syria. The final report will present the planning group’s evaluation of several courses of action.

The key findings of this first report are: