A Salafi-jihadi Insurgency Could Spread to Tanzania

An emerging Islamic State–linked insurgency in Mozambique may spill into the country’s larger neighbor, Tanzania, risking broader destabilization and the expansion of the Salafi-jihadi threat in East Africa. Salafi-jihadi insurgents based in Mozambique executed six villagers in a Tanzanian border village on November 13, marking the first reported cross-border attack in this conflict. The attack was unsophisticated but is an early warning of the threat that the Salafi-jihadi movement, which includes al Qaeda and the Islamic State, could pose to Africa’s sixth-largest country.

Mozambique is an emerging hub of Salafi-jihadi activity in Africa. The country had no record of Salafi-jihadi militancy before October 2017, when attacks began in the country’s north. By June 2019, some Mozambique-based insurgents had *pledged allegiance to the Islamic State. They operate under the administrative heading of the Islamic State’s Central Africa Province, along with a separate militant group active in an eastern region of the Democratic Republic of the Congo. The northern Mozambique insurgency is relatively unsophisticated, but persistent conditions of violence and popular grievance will likely strengthen it over time. Mozambican authorities are employing a heavy-handed military response, now with *Russian support. Disputed elections will compound Mozambique’s instability in the near term. Salafi-jihadi groups in other theaters regularly exploit such conditions to build ties with aggrieved populations and will likely do the same in Mozambique. 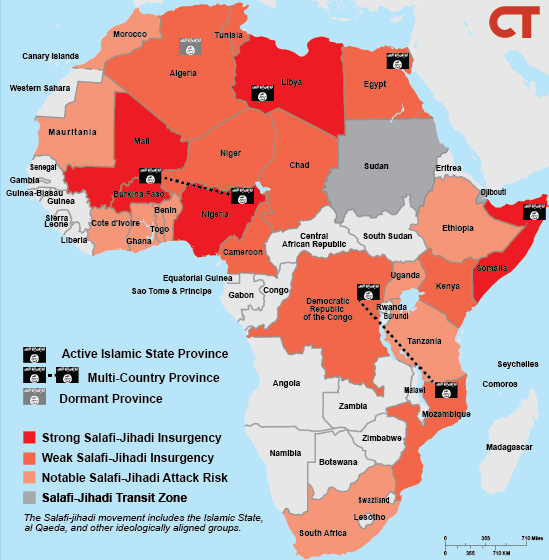 Tanzania is vulnerable to the Salafi-jihadi movement’s expansion. Tanzania, whose population is a little over one-third Muslim, has never experienced an organized Salafi-jihadi insurgency. There have been no major terrorist attacks in the country since al Qaeda’s 1998 bombings of US embassies in East Africa. The country is a refuge and recruiting ground for Salafi-jihadi militants operating in neighboring countries, however. Some of the militants in northern Mozambique are likely *Tanzanian. Tanzanians form one of the largest contingents of foreign fighters in al Shabaab, al Qaeda’s Somalia-based East African affiliate. Deteriorating political conditions in Tanzania may create new opportunities for Salafi-jihadi groups to forge ties with local populations. Political turmoil in the Muslim-majority Zanzibar archipelago has already helped push some Zanzibari youths to join al Shabaab. Zanzibar’s crisis will deepen ahead of elections scheduled for 2020.

In the worst case, Mozambique’s Salafi-jihadi insurgency could spread into Tanzania and destabilize the country. Tanzania has twice the population of Mozambique. Its destabilization would have profound regional effects. This would likely include increasing the existing refugee burden on Kenya, a US strategic partner. Indicators that Salafi-jihadi militants are shifting their focus to Tanzania include the production of Swahili-language media by Salafi-jihadi groups and kidnappings or other attacks intended to disrupt Tanzania’s vital tourism industry, as al Shabaab has successfully done in Kenya. Militants may also target foreign investments such as mines or factories. Tanzanian authorities would likely respond to the initial stages of the insurgency in a heavy-handed and militarized manner, risking driving more support to Salafi-jihadi groups among targeted communities. Tanzanian authorities could create favorable conditions for Salafi-jihadi recruitment in Zanzibar by using the alleged threat of terrorism to justify greater repression of political opposition.

If the US and its partners ignore the growing Salafi-jihadi problem in southeastern Africa, it will metastasize and eventually threaten the US directly. Salafi-jihadi groups have global ambitions. Their expansion in Africa allows them to develop sanctuaries and capabilities that they will one day use to attack the West. The US can take low-cost measures to contain East Africa’s Salafi-jihadi threat now before it becomes unmanageable. The US should consider increasing cooperation with Tanzanian and Mozambican security forces in ways that can mitigate those forces’ most counterproductive practices. The US should also engage with Tanzania to attempt to resolve the political crisis in Zanzibar. The consequence of the worst scenarios is a contiguous swath of instability and Salafi-jihadi mobilization from the Arabian Peninsula to southern Africa.