[Notice: The Critical Threats Project and the Institute for the Study of War frequently cite sources from foreign domains. All such links are identified with an asterisk (*) for the reader's awareness.]

This analysis is co-published by the Institute for the Study of War (ISW) and the Critical Threats Project at the American Enterprise Institute.

Iranian proxies in Iraq have sustained attacks since the killing of Quds Force Commander Qassem Soleimani in an attempt to provoke a US response that will lead to the expulsion of American forces from the country. Iranian proxies began a campaign of rocket attacks on US positions in Iraq in October 2019. These attacks are intended to goad the US into responses that will bring political pressure on Iraqi leaders to expel American forces. Iraqi proxies have conducted at least 14 attacks since early January, indicating that Soleimani’s killing did not cause a de-escalation. An Iranian proxy instead escalated on March 11 with the largest rocket attack since Soleimani’s death, causing two US casualties. The scale of this attack—like the December 27th attack that caused the first US casualty—indicated heightened effort to cause American casualties. Its timing indicates an attempt to incite a US response that will make the US presence politically untenable for Iraqi politicians days before the deadline to elect a new prime minister in Iraq. The US response on March 12 accidentally killed non-proxy Iraqi citizens, prompting Iraqi leaders—including Iraqi President Barham Salih—to *accuse the US of violating Iraqi sovereignty. The Iranian regime may also welcome heightened tensions with the US as an enemy other than its own ineptitude amid its failure to manage the COVID-19 pandemic. 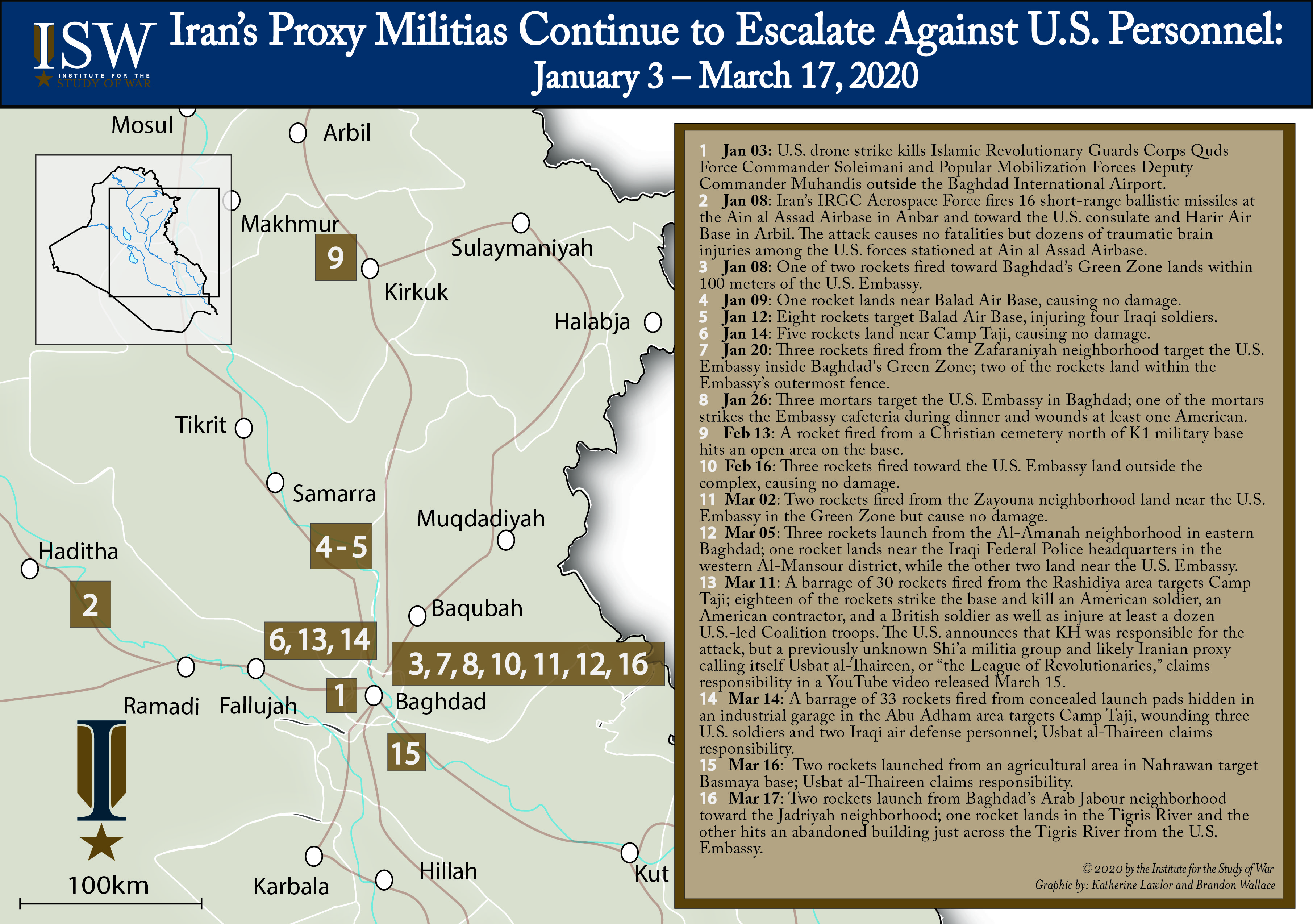 (Source: The Institute for the Study of War)

Iran’s escalation of rocket attacks on US bases leading to the strike on December 27 that killed one American and wounded several others resulted in part from Iranian leaders’ reaction to protests in Iraq, Lebanon, and Iran. Iranian leaders perceived those protests to be US-instigated and part of a broader American-Israeli effort to undermine Iran’s regional influence. They may have seen the outbreak of protests in Iran itself as the crossing of one of their red lines: a US attempt to overthrow the Iranian regime. The US-Iran escalation that led to the killing of Qassem Soleimani and the inadvertent shooting down of a civilian airliner may thus have resulted in part from Tehran’s misperceptions of regional events since early October.

The Iranian response to the protests must be considered in the longer context of the Islamic Republic’s permanent objectives and adjustments to those objectives after the Islamic State invasion of Iraq in 2014. The Islamic Republic of Iran has sought to expel the US from the Middle East since its inception. The storming of the US Embassy and seizure of American hostages in 1979 was a crucible event for the emerging revolutionary state and its security forces. Iran has aimed to neutralize Iraq since the Iran-Iraq War to ensure that it never again faces an existential threat from its western neighbor.

Iran looked to be making progress on both objectives with the withdrawal of US forces from Iraq in 2011, but the return of US troops to fight ISIS there in 2014 called Iran’s gains into question. The rise of countrywide insurgency in Syria as a result of the 2011 Arab Spring put the Iranian regional project at risk and made Iranian influence in Iraq more important than ever. Tehran needed not only to transit Iraq to reach Syria but also use Iraqi Shia militias as fighting forces.

The US withdrawal from its nuclear-deal obligations and announcement of the “maximum pressure” campaign at the end of 2018 shaped the initial period of escalation. The Iranian regime focused first on persuading European states to ignore the threat of American secondary sanctions and continue fulfilling their obligations under the nuclear deal. But Iran’s threats to renege on its own commitments under the deal and limited kinetic escalation did not achieve its goals.

The US revocation of the final waivers on oil sanctions in May 2019 led to a change in Iran’s methods. Iran and its proxies significantly expanded their military escalation campaign against US and partner interests in the region. Their attacks on ships and Saudi facilities culminating in the September attack on the Saudi Abqaiq plant, however, did not persuade the Europeans to break with the US or erode Gulf countries support for the US “maximum pressure” campaign enough for Iran’s purposes. Iran would likely have pursued additional escalation in the fall.

The explosion of anti-government protests in Iraq and Lebanon that quickly took on anti-Iranian tones materially altered the Iranian calculus. Tehran was making good progress toward gaining political ascendency in Iraq when the protests there erupted. Iran’s leaders quickly blamed the US for instigating those protests and sought to deflect Iraqi anger from Iran to the US. Iran increased the scale and intensity of proxy attacks on US military and diplomatic facilities in Iraq, culminating in the attack that killed an American in Kirkuk on December 27. That killing began a new period of escalation culminating in the killing of Soleimani and the accidental shoot down of a Ukrainian airliner shortly after an Iranian retaliatory strike on US bases in Iraq.

The current escalation pattern therefore reflects a merging of what had been two separate phenomena: Iranian responses to the “maximum pressure” campaign and regional anger at poor governance and corruption. Tehran saw the protests in Iraq and Lebanon incorrectly as an American escalation. Iran’s leaders likely saw the explosion of protests in Iran in mid-November as an additional US escalation; they certainly blamed the US for instigating and coordinating the “sedition” in all three countries. The US must be more alert than ever to the risk that Iranian misperceptions may lead to further unintentional and undesired escalations.