The Telegram channel that has been organizing the protests called for demonstrators to march on a detention facility in Minsk on August 17. NEXTA - a Poland-based telegram channel which emerged as the primary organizer of protests – published a message at 9am local time calling for protesters to gather in Independence Square at 6pm local time – the latest yet start time for protests, which have so far begun between noon and 2pm.[1] NEXTA instructed protesters to progress past the Volodarskogo Street pre-trial detention facility (where most detained protesters have been processed) to the Akrestsin street detention facility (where the majority of alleged torture of protesters has occurred) by 8pm. NEXTA called for doctors and journalists to then enter the facility to interview tortured detainees and “show on air what is happening there.”

Protesters followed the route to reach the Akrestin prison. Protesters arrived outside the “Okrestina” prison on Volodarskogo St around 7pm local time.[2] An estimated 5,000-7,000 protesters rallied around the facility for around an hour, chanting for detainees to be released.[3] The protests then continued on to the Akrestsin facility by 8pm, following the NEXTA plan.

Protesters split on next steps upon arriving at the facility. Many protesters expressed their desire to attempt to enter the facility and free detainees. Independent media and NEXTA’s telegram channel began referring to a divide in the demonstration between “protesters,” who wanted to gain entrance to the facility, and “volunteers,” who urged protesters to stay in place to avoid any responses by security personnel against detainees and physically blocked the perimeter of the facility from protesters. Belarusian media and the NEXTA channel have not used this divide between “protesters” and “volunteers” prior to August 17. No Belarusian security personnel were present outside the facility.

The “volunteers” attempted to diffuse the protest and prevent protesters from moving on the facility. The volunteers “compromised” with protesters to attempt to send journalists – per the original NEXTA post – into the facility, but they were denied entrance by security personnel inside. The volunteers then reportedly attempted to contact Maria Kolesnikova, representative of Viktor Babriko, a prior opposition candidate with likely Kremlin connections.[4] Olga Kovalkova, representative of main opposition candidate Svetlana Tikhanouskaya, arrived instead at 11:30pm local time.

Olga Kovalkova was unable to enter the facility, with security personnel inside the facility refusing to come out and denying the presence of any detainees. Kovalkova informed protesters they would “not be able to solve anything” at night and urged the protesters to return the morning or afternoon of August 18. Protesters then dispersed at roughly midnight local time.[5]

The lack of action around the Akrestin facility provoked the first divide within the protest movement. Many protesters expressed discontent to protest organizers on Twitter and in person questioning why they were told to march to the facility if they were not going to take action. Protesters chanted “every day” as they dispersed and are likely to return on August 18.

NEXTA capitalized on the divide to denounce the “volunteers” for preventing action against the facility. NEXTA’s telegram reshared a post from an independent journalist named “Mikola.”[6] Titled “growing pains,” the post reassured protesters that divides in protests were normal, before stridently denouncing the “volunteers,” stating they “took a fundamentally wrong position” in refraining from moving on the facility. The post warned protesters against letting the volunteers control their actions, stating that accepting the volunteers‘ call, “do not protest, otherwise it will be worse,” means accepting the rules of Lukashenko’s regime. The post accused the volunteers of attempting to “narrow our space of action through blackmail and shooting threats.”

NEXTA is presenting itself as trying to unify the protest movement around a more confrontational and action-oriented agenda. NEXTA stated the protest movement cannot take a single step back, and the only solution is to remove Lukashenko from power. NEXTA concluded by warning that Lukashenko would exploit any break in the unity of the protesters, stating security forces only refrained from violence due to protester unity. NEXTA posted a follow-on post stating “tomorrow we will definitely give the floor to the representatives of the volunteers who actively defended the approaches to the torture chamber [referring to the volunteers],” directly aligning those who stopped the protest with the Lukashenko regime.[7]

NEXTA’s instructions to protesters, however, generated a predictable problem that has led to the first fracture in the movement.  NEXTA’s instructions to move to the facility, with no clear plan after arriving there caused confusion and foreseeable discontent among the demonstrators, which NEXTA made no attempt to manage as it emerged. NEXTA may simply not have planned well in this case, but it may also have intended to generate a fracture in the movement for some purpose we have not yet assessed.

NEXTA will likely instruct protesters to focus on the Akrestin facility again on August 18. NEXTA posted a final update the night of August 17 stating “we will announce an extremely interesting plan for the next day in the morning. And it won't let you down.”[8] The Belarusian protest movement will likely face an important decision point on its means on August 18.

Click here to expand the image via the Institute for the Study of War. 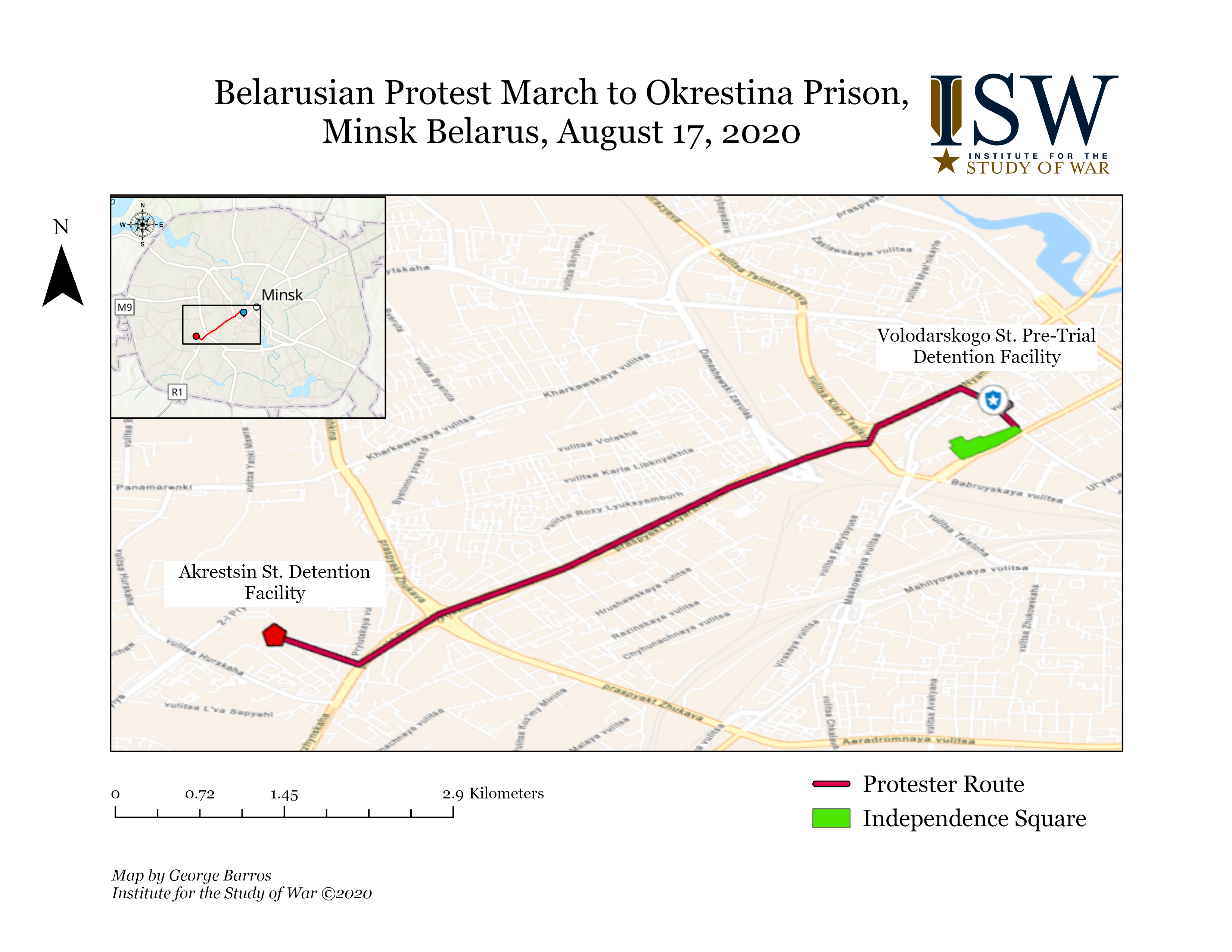