This daily synthetic product covers key events related to renewed Russian aggression against Ukraine and replaces ISW’s previous “Indicators and Thresholds for Russian Military Operations in Ukraine and/or Belarus,” which we maintained from November 12, 2021, through February 17, 2022. That document is no longer updated. 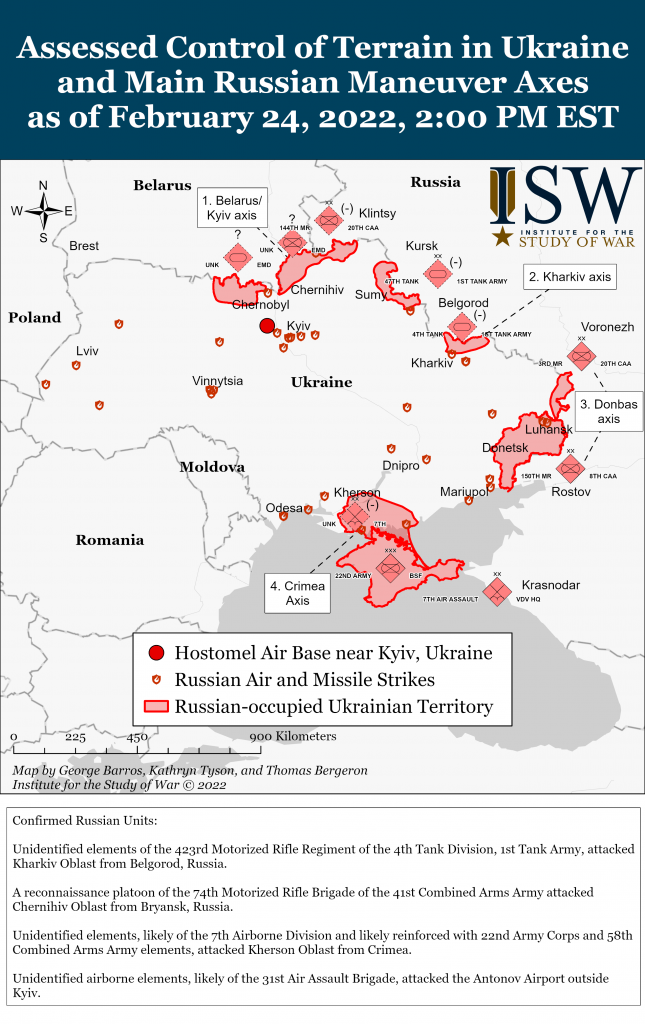 Russian President Vladimir Putin began a large-scale invasion of Ukraine on February 24 likely aimed at full regime change and the occupation of Ukraine. Russian forces met several setbacks on the first day of major offensive operations. However, Russian forces remain much larger and more capable than Ukraine’s conventional military. Russia will likely defeat Ukrainian regular military forces and secure their territorial objectives at some point in the coming days or weeks if Putin is determined to do so and willing to pay the cost in blood and treasure.

Russian military operations began with a short and incomplete air campaign on February 24 around 4:00 am local time targeting Ukrainian air defenses, supply depots, and airfields across unoccupied Ukraine. US defense officials estimate initial strikes comprised over 100 missiles including a mix of short and medium-range ballistic missiles, cruise missiles, and sea-launched missiles.[1] Russia did not successfully ground the Ukrainian air force or cripple the Ukrainian armed forces, enabling several Ukrainian successes on February 24. Russia has not demonstrated its full air and missile capabilities and will likely conduct further waves of strikes in the coming days aimed at degrading Ukraine’s command and control and ability to redeploy forces.

Russian President Vladimir Putin seeks to obfuscate to Russian citizens that he launched a large-scale invasion of Ukraine on February 24 aimed at regime change likely to mitigate blowback from a Russian population unprepared for a major war.[4] Putin’s claimed objectives to “de-nazify” and “demilitarize” Ukraine are a transparent cover for an unprovoked war of aggression to occupy a neighboring state. Putin and other Kremlin officials repeatedly claimed Russia’s offensive is a “limited operation” necessary to defend against false Russian claims of an imminent Ukrainian offensive against Donbas and refused to call it a war.[5] Kremlin Spokesperson Dmitry Peskov refused to expand on the specific objectives of the Russian military operation in Ukraine, stating the Kremlin is interested in direct negotiations with Ukraine to secure Kyiv’s official neutrality between the West and Russia and the removal of all “weapons.”[6] Ukraine’s government is unlikely to agree to Putin’s demands. The Kremlin likely seeks to portray its offensive war as a limited action to the Russian population to prevent blowback after months of repeated denials Russia would launch an offensive against Ukraine.[7]

The Kremlin is presenting tightly controlled and largely fictitious media coverage of Russian operations in Ukraine to support the false narratives that Russia is not engaged in a large-scale invasion of Ukraine and that Russian forces are easily succeeding. Russia’s Ministry of Defense is not publishing updates beyond cherrypicked video briefings in contrast with the Ukrainian government’s constant updates on both successes and failures. Kremlin-sponsored TV programs do not show videos of explosions, battles, and military movements throughout Ukraine, presenting the conflict as occurring mainly in the Donetsk and Luhansk People’s Republics (DNR and LNR).[8] Kremlin newswire TASS has not provided significant information on damaged infrastructure throughout Ukraine.[9] Russian TV outlets emphasize that the Russian Armed Forces only targeted 74 airstrikes at Ukrainian military infrastructure and supposedly disabled 11 airfields, 18 air defense radar stations, and a Ukrainian naval base while downplaying Russian ground troop presence in Ukraine.[10]

Thousands of Russian civilians protested Russia’s invasion of Ukraine in several major cities despite state crackdowns and mass arrests on February 24. Protesters in Moscow, St Petersburg, Yekaterinburg, and 54 other cities chanted “no to war” and waved Ukrainian flags amid a heavy presence by Russian riot police.[12] Russian celebrities, political activists, sports stars, and artists condemned the war in statements on social media and to Western media outlets.[13] Russia’s Investigative Committee threatened to track down protest organizers and demonstrators, promising “severe punishment for mass riots.”[14] Russian police detained at least 966 demonstrators in Moscow and 432 in St Petersburg according to civil rights group OVD-Info.[15] Russian President Vladimir Putin likely intended to use a series of planned false flag attacks to build a media narrative and support for his invasion of Ukraine among the Russian public. However, repeated US and Ukrainian exposure of planned Russian actions likely led Putin to begin the invasion without widespread public backing.[16]

Belarusian President Alexander Lukashenko gave a speech on February 24 setting information conditions for possible Belarusian operations against NATO's eastern flank, claiming Belarusian troops will defend against a NATO "stab in the back” and falsely claiming Poland may attack Belarus.[17] ISW has not observed any Belarusian forces operating in Ukraine as of February 24, though Lukashenko stated they will join Russian operations in Ukraine “if necessary.” Lukashenko stated Belarusian forces are shifting their efforts to protect Belarus’s border with Poland and Lithuania to prevent NATO from “stabbing Russia in the back.”[18] Lukashenko further claimed the Polish government “needs a war” to obfuscate its domestic unpopularity. Belarusian Defense Minister’s Aide for Ideology Major-General Leonid Kasinsky stated that Belarusian troops are reinforcing its borders to prevent an enemy “surprise attack” rather than participate in Russian operations in Ukraine.[19]

The sanctions packages did not cut Russia off from the SWIFT high-security payment network, which could have imposed high costs on Russia’s financial activity abroad but would also likely spark an energy crisis in European countries that rely on Russian imports. The foreign ministers of Ukraine, Latvia, Estonia, and Lithuania called on the EU to end Russia’s participation in SWIFT but Biden said on February 24 that removing Russia from SWIFT is not “the direction the rest of Europe wants go at this moment.”[27] Biden emphasized that the sanctions the United States imposed on Russian banks are “of equal consequence, maybe more consequence” than removing Russia from SWIFT.[28]

US and NATO allies deployed additional forces to NATO’s eastern flank to deter and prevent spillover from Russia’s invasion of Ukraine on February 24.[29] NATO Secretary-General Jens Stoltenberg stated on February 24 that NATO has activated defense plans to enable force deployments "where necessary,” including the capability to activate the NATO Response Force. NATO will deploy “additional land and sea forces to the eastern part of the Alliance” and will place air support on standby to strengthen the security and defense of its allies.[30] The United States deployed 7,000 US troops already stationed in Europe to Estonia, Latvia, Lithuania, Poland, and Romania; authorized additional US forces to be sent from the United States to Germany; extended the stay of 500 US troops in Lithuania; and authorized an unspecified number of F-35 fighter jets to Estonia.[31] The US Federal Aviation Administration (FAA) declared an expansion of its existing flight ban on US civilian aircraft over parts of Eastern Europe and Russian airspace to include all of Ukraine, Belarus, and western Russia.[32] Germany sent 350 additional combat troops to Lithuania and three additional fighter jets to Romania.[33]

Eastern European states including Moldova, Slovakia, Hungary, and Poland deployed troops to their borders to brace for a possible mass arrival of Ukrainian refugees.[34] The Lithuanian and Moldovan governments declared states of emergency on February 24. Lithuania deployed an unspecified number of forces along its borders with Belarus on February 24.[35] Denmark announced on February 24 that it will deploy 200 troops to Estonia and two F-16 fighter jets to police Poland’s air space in early March while preparing an additional battalion of 700-800 soldiers to contribute to NATO’s defense operations.[36]

NATO member states Poland, Estonia, Latvia, Slovakia, and Lithuania triggered Article 4 to launch consultations within NATO as a protective measure on February 24, triggering additional NATO deployments to its eastern flank.[37] Article 4 of the Washington Treaty allows member states to start formal consultations if a member state feels threatened, and can lead to collective NATO action.[38] NATO Secretary-General Jens Stoltenberg underscored that NATO will continue taking all necessary measures to bolster security by deploying additional land, air, and sea forces against Russia’s threat to Euro-Atlantic security.[39] Stoltenberg called on Russia to withdraw its military forces from Ukraine and engage in dialogue with NATO.[40] Stoltenberg called for a virtual summit of NATO heads of state on February 25 to discuss NATO’s response. Separately, US Secretary of State Antony Blinken and US Secretary of Defense Lloyd Austin emphasized that the US commitment to NATO Article 5 mutual defense commitment is “ironclad” in a call with NATO Secretary General Stoltenberg.[41]

Eastern European states and international aid organizations are preparing for a major influx of Ukrainian refugees.[42] United Nations Secretary-General Antonio Guterres announced the UN will release $20 million from its humanitarian relief fund to support Ukrainian civilians. The UN High Commission for Refugees (UNHCR) also stated its readiness to supply aid to Ukrainian civilians and urged neighboring countries to keep their borders open to accept Ukrainian refugees. The UNHCR estimates that several thousand Ukrainian refugees have fled to northern Moldova and Romania and approximately 10,000 have been displaced within Ukraine since Russia’s invasion began on February 24. The World Health Organization warned of a possible “humanitarian catastrophe” and expressed concern for civilians caught in the conflict. The Polish government announced it expects as many as one million Ukrainian refugees to enter Poland. Members of the US 82nd Airborne Infantry Brigade and Combat Team began preparations to assist local authorities in hosting refugees in Rzeszow, Poland.[43]  Germany announced it would provide aid to Poland and other neighbors in the event of a large-scale refugee crisis.[44] Hungary and Slovakia also deployed troops along their borders with Ukraine to manage the expected influx of refugees.

China refused to condemn the Russian invasion of Ukraine and announced new imports from Russia that could mitigate the impacts of Western sanctions on February 24. Chinese Foreign Ministry Spokesperson Hua Chunying denied China supported Russia’s invasion of Ukraine but refused to condemn it during a February 24 press conference.[45] Chunying stressed the importance of joint cooperation and addressing the legitimate security concerns of all parties. Chunying accused the United States of “fueling [the] fire” of tensions. Chunying also announced an agreement for China to import additional Russian wheat—a possible lifeline for the Russian economy and an early indicator of China’s future approach to Western sanctions against Russia. Chunying claimed that China and Russia finalized the agreement during Russian President Vladimir Putin's February 4 visit to Beijing.[46]