CTP and ISW published its most recent Russian campaign assessment at 3:00 pm EST on March 4. 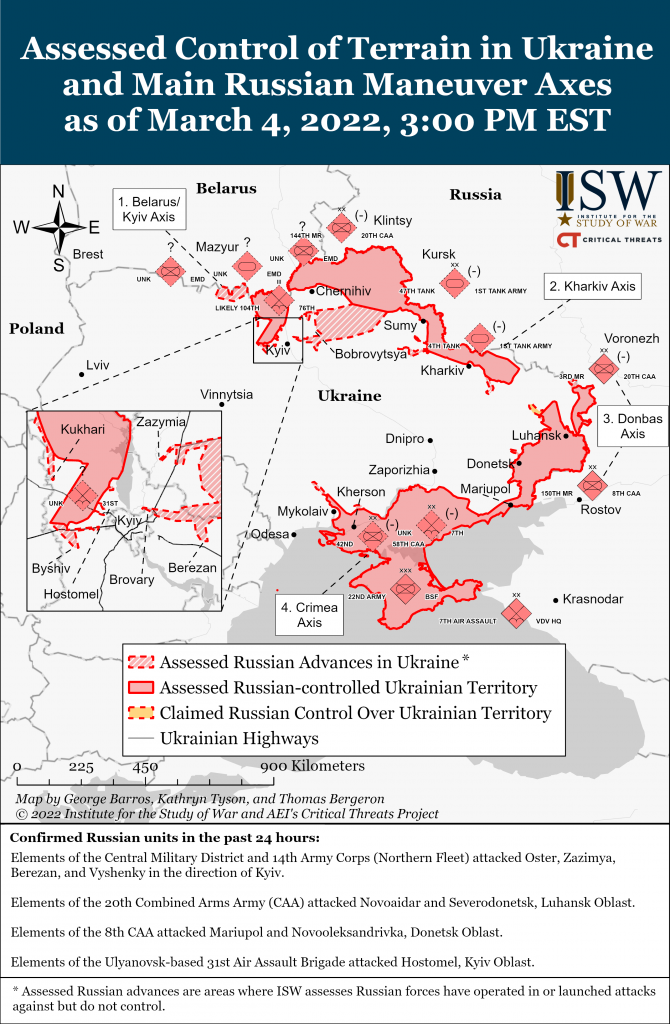 Russian forces continue their focus on encircling Kyiv. The western envelopment remains bogged down, but Russian troops have moved more rapidly from the east and are arriving in the capital’s outskirts on the Sumy axis. The speed of the advance from the east is likely to slow as Russian forces leave sparsely-inhabited and flat terrain and enter the more congested and built-up eastern suburbs. Russian mechanized forces around Kharkiv appear to be supporting operations toward the east and west of the city, likely weakening their ability to encircle or seize it.

The Russian military has concentrated considerable combat power around Mariupol to encircle and ultimately seize or destroy it. The purpose of this effort is not entirely clear. The capture or destruction of Mariupol will not likely materially affect the outcome of the war, whose decisive operations are more than 600 kilometers northwest around Kyiv. Russian forces have also renewed their ground offensive west from Crimea toward Odesa, currently focusing on advancing from Kherson to Mykolayiv, and seized the Zaporizhya Nuclear Power Plant north of Crimea. The continued pursuit of objectives along three diverging axes by the same group of forces in Crimea has hindered the Russian military’s ability to generate decisive effects on any of the three.

Russian forces attacked and captured the Zaporizhzhia nuclear powerplant and surrounding areas after a firefight with Ukrainian forces that caused a fire resulting in a damaged nuclear reactor. The Kremlin falsely blamed Ukraine for attacking Russian forces near the plant. Russian forces seized Ukraine’s Zaporizhzhia nuclear power plant in a direct assault on March 4, causing a fire in the nuclear complex. The Kremlin likely targeted the plant to gain the ability to shut down a substantial portion of Ukraine’s electrical grid; Zaporizhzhia supplies about half of Ukraine’s total electricity.[1] The Kremlin attempted to deflect international outrage by falsely reframing the incident as a dangerous Ukrainian attack on a Russian-controlled facility while Ukrainian leadership leveraged the Russian aggression to call for additional NATO intervention in the conflict.

The Kremlin dramatically limited Russia’s already isolated domestic information environment and criminalized unfavorable coverage of the war in Ukraine on March 4, setting conditions to improve the domestic efficacy of its information operations. Russia could also leverage the information blackout to commit additional atrocities in Ukraine without further eroding domestic Russian support of the invasion.

Russian mass media censor Roskomnadzor blocked several Western media outlets for spreading “fake news” on March 4. The blocked sites include Facebook, Twitter, Voice of America, BBC, Deutsche Welle, Meduza, and Radio Free Europe. The Kremlin also blocked the Apple Store and Google Play platforms, likely to prevent the installation of Virtual Private Networks (VPNs) to bypass media blackouts.[18] BBC and Voice of America announced that they will continue to provide accurate Russian-language news coverage despite the blocks.[19]  Roskomnadzor blocked the sites due to their alleged distribution of  ”fake” information about “the essence of the special military operation in Ukraine, its form, the methods of combat operations (attacks on the population, strikes on civilian infrastructure), the Russian armed forces’ losses and civilian victims.”[20] Independent Russian media outlet Znak announced it was preemptively suspending its work and closing its site due to media censorship on March 4.[21] Russian newspaper Novaya Gazeta stated it would remove all material related to the Russian military in Ukraine due to censorship restrictions.[22] Regulators additionally shut down independent Russian news outlet TV Rain.[23] TV Rain ended its final broadcast with its staff resigning en-mass and saying “no to war” on March 3.[24]

The Russian legislature consolidated censorship measures on March 4 and unanimously passed a bill criminalizing “fake news” about Russian military activities in Ukraine.[25] Putin signed the bill into law on March 4.[26] NPR reported that “under the new bill, prison sentences for spreading news that discredits the Russian military would range from up to three years for members of the public, five to 10 years if the offender used an official position or if their actions had extreme motives, and 10 to 15 years if the consequences are deemed to be serious.”[27] The fines may cost up to 1.5 million rubles ($14,000).[28] Russian law enforcement separately conducted a search of the independent human rights groups Memorial International and Civic Assistance, both of which help migrants and refugees, on March 4.[29]

The Kremlin set conditions to justify potential Russian conscriptions and more aggressive Russian operations against Ukraine on March 4. Russia The Kremlin emphasized that the West may be planning nuclear provocations against Russia that would force Russia to respond, setting conditions for a false-flag operation to justify additional demands on the Russian population and to stoke nationalist anti-West fervor. Russian President Vladimir Putin called for the “normalization” of relations with other states and said that Moscow has “absolutely no ill intentions” toward neighboring states on March 4. Putin additionally claimed that the Russian military offensive in Ukraine was only “in response to unfriendly actions toward Russia.”[33]

The Russian Federation Council—the upper house of the Russian parliament—and Russian Defense Ministry spokesperson Maj. Gen. Igor Konashenkov claimed on March 4 that the West had been preparing Ukraine for a “provocation” against Russia from Kharkiv, Ukraine, in concert with Western journalists.[34] The Federation Council alleged that Ukraine’s “sudden” need of nuclear weapons only intensified Russian national security concerns.[35] Russian Foreign Intelligence Services Director Sergei Naryshkin stated that the West “not only seeks to revive the Iron Curtain, but also to destroy Russia.”[36] Russia-backed former Ukrainian Prime Minister Mykola Azarov wrote on Facebook on March 4 that Ukraine and the West are planning a nuclear genocide against civilians in eastern Ukraine that will provoke a Russian response.[37]  Azarov warned that NATO plans to deploy forces to Ukraine in summer 2022 and that there will be a Third World War by the end of 2022.[38]

The Kremlin reiterated its framing of the Russian invasion of Ukraine as a humanitarian effort on March 4 while painting Ukrainian leadership as fleeing the country. Russian President Vladimir Putin stated that accusations that Russian troops have been bombing Ukrainian cities are “gross propaganda fakes” on a call with German Chancellor Olaf Scholz on March 4.[39] Putin told Belarusian President Alexander Lukashenko over the phone that Russia’s objective in Ukraine is to “protect the civilian population of Donbas” and that Russian military operations are going “according to plan” and will be carried out “in full” on March 4.[40] Lukashenko continued expressing his support for Russia.[41] Russian Duma Speaker Vyacheslav Volodin continued to falsely claim that Ukrainian President Volodymyr Zelensky is in Poland on March 4.[42]

Belarusian President Alexander Lukashenko stated that Belarus will not enter the war in Ukraine on March 4.[44] Lukashenko said that “there is no need for Belarus to participate in the ‘special operation’” regardless of the provocations of outside forces.[45] Lukashenko emphasized that his task is to protect Belarus on Belarusian land and that the West wants Belarus to enter the war.[46] Separately, Lukashenko officially approved a referendum amending Belarus’ constitution on March 4. The constitutional amendments will give the Kremlin more de facto military control over Belarus and allow Belarus to host Russian nuclear weapons. The revised Belarusian constitution also ends Belarus’ previously constitutionally enshrined neutral status. Lukashenko falsely claimed that the vast majority of citizens democratically supported the amendments.[47] Lukashenko said that the new constitution marks the building of an independent and sovereign state as well as a new state ideology.

Russian President Vladimir Putin affirmed support for Belarus’ interest in obtaining access to the Baltic Sea and developing port facilities in a phone call with Lukashenko on March 4.[48] Lukashenko and Putin signed legislation approving a draft customs cooperation agreement on March 3.[49] The agreement provides for information interaction, joint customs control, and the creation of an “interstate center within the customs committee of the Union State” to assess risk management and analytical functions when monitoring customs operations.

Ukraine is attempting to increase the ability of Russian citizens to learn about Russia’s invasion of Ukraine despite Russian media censorship, likely to increase domestic Russian opposition to the war.  Ukrainian Ministry of Internal Affairs advisor Anton Geraschchenko posted a list of over 100 Russian prisoners of war (POWs) to Facebook.[50] The post included personal details about each POW and information about how their families can retrieve them from Ukrainian territory. Russia banned domestic access to Facebook on March 4.[51] Ukrainian volunteers directly reached out to the families of Russian POWs via the Russian-owned Telegram app to inform their friends and family of their capture. Volunteers provided details for families to come to Kyiv and collect the POWs, an unlikely journey in the midst of Russia's invasion.[52]

Ukraine has additionally galvanized volunteer support to conduct cyberattacks against Russian government sites.[53]  Deputy Chief of Ukraine’s State Service of Special Communications and Information Protection Viktor Zhora stated that the “IT Army” could be as large as 400,000 people from Ukraine and other countries and that the group has temporarily taken down various Russian government and bank websites.[54] Zhora additionally said that the “IT Army” is working to combat domestic censorship within Russia by sending Russian citizens pictures and information about the reality of the war over texts and other messaging apps.

NATO rejected Ukraine’s request to establish a no-fly zone over Ukraine on March 4.[55] NATO Secretary-General Jens Stoltenberg emphasized that NATO will continue providing material support to Ukraine but will not operate planes or troops in Ukraine to avoid a larger conflict with Russia. The establishment of a no-fly zone in Ukraine would require NATO willingness to use lethal force against Russian aircraft, functionally entering the war on Ukraine’s behalf.

NATO and EU countries continued to provide lethal and non-lethal military equipment and aid to Ukraine on March 4.[56]

The Kremlin continued to struggle with the effects of international sanctions on Russia’s economy. Russian Deputy Prime Minister Andrey Belousov said that the Russian government is considering three options for foreign companies, including continuing operations as before, foreign shareholders transferring their share to Russian partners, and shuttering the companies’ Russian operations through “accelerated bankruptcy” procedures.[60] The Russian Central Bank announced on March 4 that the Russian stock exchange will remain closed at least through March 8.[61] S&P Global severely cut Russia’s credit rating from investment grade to CCC- on March 4 for failing to pay both its local currency and dollar debts.[62] Russian state-owned news agency TASS reported that Russia’s Industry and Trade Ministry recommended suspending Russian fertilizer exports, a move that would increase prices and potentially affect farmers worldwide, on March 4.[63]  The Russian Duma adopted a law that allows Russia to promptly raise pension payments on March 4, likely to reduce the effect of sanctions-driven inflation on Russian pensioners.[64]

Russia has not yet established humanitarian corridors to enable civilian supply and evacuation as Russia had agreed to in its March 3 negotiations with Ukraine. Russian sieges continue deteriorating living conditions in southern Ukraine despite increased Western efforts to coordinate humanitarian aid.[65]

The US Department of Defense established a deconfliction line with Russia’s Ministry of Defense to prevent possible military incidents near Ukraine and Belarus on March 1.[71]

Russia’s invasion of Ukraine has prompted Finland and Sweden to increase high-level discussions on NATO membership and multilateral defense measures.[72]

Turkey continued positioning itself as a leading candidate to mediate negotiations with Russia and Ukraine on March 4. Turkish Foreign Minister Mevlut Cavusoglu said he wants to mediate discussions between the Russian and Ukrainian foreign ministers on the sidelines of the Antalya Diplomacy Forum in Ankara, which will run from March 11-13.[80] Turkish President Recep Tayyip Erdogan also emphasized that Turkey was “striving” for an “immediate ceasefire” during a phone call with UK Prime Minister Boris Johnson on March 4.[81] Erdogan discussed the fighting with Ukrainian President Volodymyr Zelensky on a separate phone call shortly after his conversation with Johnson.[82] Saudi Crown Prince Mohamed bin Salman also offered to mediate between Russia and Ukraine in a phone call with Russian President Vladimir Putin on March 3.[83]