CTP and ISW published the most recent Russian campaign assessment at 4:30 pm EST on March 2.

Russian forces resumed offensive operations in support of their envelopment of Kyiv on March 2 but made few territorial advances. Russian forces resumed offensive operations on both axes of advance toward Kyiv after largely pausing for 72 hours to reinforce and resupply their troops north and west of Kyiv. Russian operations to envelop Kyiv are Moscow’s main effort. Russian troops are also undertaking three supporting efforts, one to seize Kharkiv, one to take Mariupol and secure the “land bridge” connecting Rostov-on-Don to Crimea, and one to secure Kherson and set conditions for a drive west toward Mykolayiv and Odesa. The three supporting operations were active in the last 24 hours; Russian forces likely captured Kherson and began a bombardment of critical civilian infrastructure in Mariupol in a likely effort to force the city to surrender while making few territorial gains in Kharkiv.

The Russian attack on Kyiv likely consists of a main effort aimed at enveloping and ultimately encircling the city from the west and a supporting effort along the axes from Chernihiv and Sumy to encircle it from the east. The long Russian column of combat and logistics vehicles observed north of Kyiv in the last 48 hours is likely now supporting attacks directly into the city from positions Russian forces maintain in Kyiv’s northwestern outskirts. However, Russian forces are more likely to prioritize the envelopment/encirclement in the coming days, rather than a direct assault into the city.

Russian forces resumed frontal assaults on Kharkiv on March 2 and continued using area-attack weapons, dramatically increasing the damage to civilian infrastructure and civilian casualties. Russian ground forces appear to be conducting another frontal assault on Kharkiv from the northeast rather than enveloping the city and will likely face protracted Ukrainian resistance.

Russian forces in the south likely secured Kherson, began bombarding civilian infrastructure in Mariupol in a likely attempt to force the city to surrender without a direct assault, and appear to be holding their positions south of Zaporizhia. Russian forces will likely resume offensive operations towards Mykolayiv in the next 24 hours but do not appear to pose an imminent danger to Odesa. Russian forces likely seek to force Mariupol to capitulate by destroying critical civilian infrastructure and killing civilians to create a humanitarian catastrophe – an approach Russian forces have repeatedly taken in Syria. A Russian drive north through or near Zaprozhya to cut off Ukrainian forces fighting along the line of contact appears very unlikely in the next 24-72 hours. 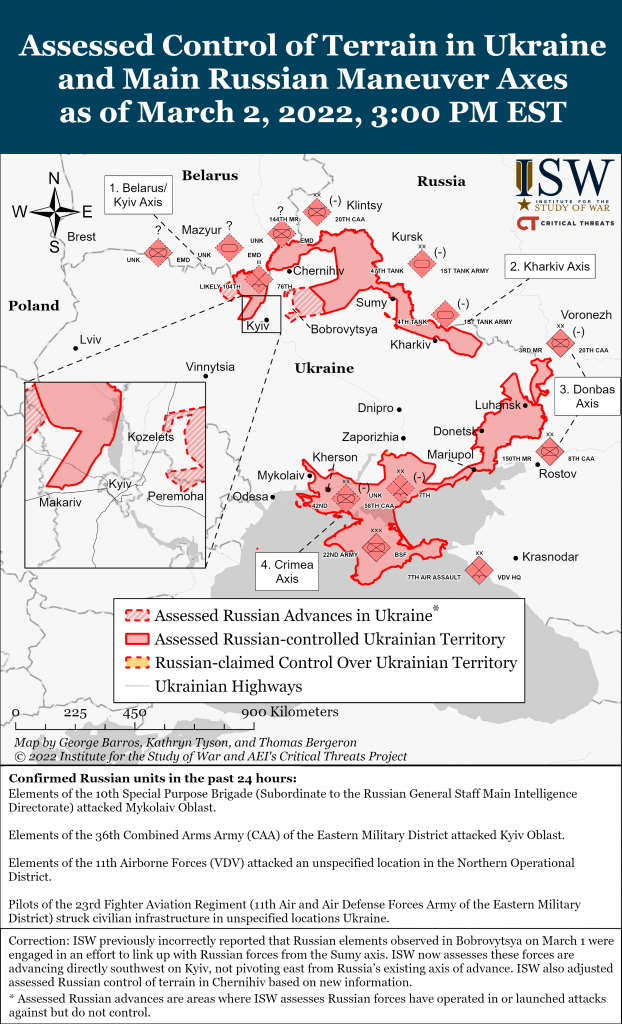 Russian forces are engaged in four primary efforts at this time.  The description of these efforts differs from previous reports’ discussion of axes because of the dynamic nature of the Russian military campaign

Russia’s Defense Ministry (MoD) released falsely deflated numbers of Russian casualties in Ukraine for the first time on March 2 after previously refusing to disclose any Russian casualties. The MoD is likely preparing the Russian public for Russian casualties as injured servicemembers and caskets begin to return to Russia. Russian MoD Spokesperson Major General Igor Konashenkov claimed that over 2,870 Ukrainians and 498 Russians have died in Russia’s invasion of Ukraine as of March 2.[1] Konashenkov claimed that Russian forces have captured 572 Ukrainian troops as of March 2.[2] Konashenkov denied claims that Russian conscripts and university cadets are participating in the war in Ukraine.[3] A senior Western intelligence official told CNN that Western intelligence counted around 5,800 Russian deaths as of March 1.[4] A Ukrainian military advisor told Reuters that Russian fatalities exceeded 7,000 as of March 2.[5] Locals in Belarus’s southern Gomel Oblast described an influx of Russian servicemembers to civilian hospitals on March 2.[6] Ukraine announced on March 2 that Russian prisoners of war may return to Russia if their mothers meet them at the Russian-Ukrainian border.[7]

The Kremlin continued to make inconsistent statements regarding negotiations with Ukraine on March 2 but reportedly agreed to a second round of negotiations to take place on March 3. The Russian and Ukrainian delegations will meet in the Brest region of Belarus, near the Polish border.[8] The Russian delegation includes Deputy Foreign Minister Andrey Rudenko, Deputy Defense Minister Alexander Fomin, State Duma member Leonid Slutsky, and Russian Ambassador to Belarus Boris Gryzlov.[9] Head Russian negotiator Vladimir Medinsky claimed that Russia wants to discuss the possibility of a ceasefire and establishing a humanitarian corridor through which refugees and aid might safely travel. Russian Foreign Minister Sergey Lavrov stated that parameters for demilitarization have not been announced.[10] Lavrov falsely claimed that the main objective of Russian operations in Ukraine continues to be the “denazification” of the Ukrainian government. Lavrov falsely claimed that Russian forces are using high-precision weapons to avoid civilian casualties. Kremlin Spokesperson Dmitry Peskov accused the Ukrainian delegation of stalling negotiations “at the behest of the Americans.”[11] Ukrainian President Zelensky stated he does not have high expectations for the negotiations and stressed the importance of “concrete steps” such as an immediate ceasefire in addition to the diplomatic dialogue.[12] Zelensky emphasized that negotiations will be ineffective unless Putin himself is present at the negotiating table.

The Kremlin continued to further restrict Russian citizens’ freedom of speech and access to information on March 2, attempting to retain control of the domestic narrative surrounding Russia’s invasion of Ukraine. Kremlin Spokesperson Peskov stated Russian President Vladimir Putin’s approval ratings have risen since Russia’s invasion of Ukraine, noting that Putin “draws strength from the [Russian population’s] support.”[13] Peskov refused to comment on the Russian Prosecutor General’s Office’s call for Russian censoring agency Roskomnadzor to restrict access to the independent radio station Echo Mosckvy but acknowledged that the Kremlin was aware of the situation on March 2.[14] The popular Russian social media site VK blocked Echo Mosckvy and the Dozhd TV channel to avoid state restrictions on VK’s entire platform on March 2 after the Prosecutor General’s Office accused both outlets of publishing false information on Russia’s actions in Ukraine and encouraging illegal protests in Russia on March 2.[15]  Roskomnadzor also restricted internet access to The Village on March 2, accusing the outlet of publishing false information about Russian activities in Ukraine and calling for "extremist activities” and mass riots.[16] Jailed Kremlin critic Alexei Navalny urged Russians around the world to protest Russia’s invasion of Ukraine, arguing it is not enough to “be against the war” but they must also “fight against it” on March 2.[17]

Kremlin media sought to portray the Ukrainian government as racist and made false claims of Ukrainian abuses of civilians on March 2. Putin falsely told Indian Prime Minister Narendra Modi that Ukrainian security services are taking Indian students hostage and using them as a “human shield.”[18] Putin claimed that Russia is “trying to organize an urgent evacuation of a group of Indian students from the war zone and their return to their homeland.” Kremlin-sponsored TV Russia 24 claimed Ukrainian “nationalists” purposely discriminate against and threaten foreigners on border crossings.[19] Russia 24 broadcast Russian State Duma Chairwoman Valentina Matvienko’s article comparing Western involvement in Russia’s war in Ukraine to Hitler’s occupation, Russophobia, and persecution of freedom of speech.[20] The Kremlin likely seeks to exaggerate claims of racism in Ukraine for Western audiences. The Ukrainian Foreign Minister refuted Putin’s claim and called on Russia to immediately cease fire in Sumy and Kharkiv so that civilians, including foreign students, would be able to evacuate immediately. Poland additionally condemned Russian ”false information about the alleged mistreatment of particular countries’ citizens by Polish and Ukrainian services.”[21] Kremlin Spokesperson Dmitry Peskov continued to peddle misinformation about the “denazification” of Ukraine and claimed that a “huge number of nationalist military units” continue to operate.[22] Peskov called for the ”punishment” of ”Nazi associations operating in the country.”[23] Peskov also claimed that Putin’s speech about the historic lack of Ukrainian sovereignty and its Soviet creation of the state did not apply to other post-Soviet countries.[24] Russian talk shows claimed that Moscow can finally show Ukrainians that Russians are not “nomads“ and can reclaim Kyiv as their historic birthplace.[25] The Kremlin continues to undermine Ukrainian sovereignty and territorial integrity to justify further Russian invasion.

The Kremlin began setting conditions to invest in its domestic technology sector and kept Russia’s stock exchange closed for a third day but is unlikely to mitigate Western sanctions. The Russian Central Bank kept Russia’s stock exchange closed for a third day on March 2 in a likely attempt to defer selloffs.[26] The central bank also blocked coupon payments to foreign bondholders on March 2, risking a default.[27] Russia’s largest bank, Sberbank, withdrew from the European market and announced that its Austrian branch will soon close on March 2.[28] Kremlin Spokesperson Dmitry Peskov stated that despite the Russian economy experiencing a serious blow due to Western sanctions, “there is a margin of safety, there is potential, there are plans.”[29] Peskov added that the “hostile” sanctions aim to undermine the integrity of the Russian economy.[30]

The Kremlin is also taking measures to prop up Russian businesses and targeted sectors. Russian President Vladimir Putin signed a decree to accelerate Russia’s domestic IT development on March 2, likely to minimize future Russian reliance on Western technology and imports following the withdrawals of Western tech companies from the Russian market.[31] Mishustin also announced additional government provisions including preferential interest rates and tax and inspection exemptions for Russia’s IT sector.[32] State Duma Chairman Vyacheslav Volodin created the Council for Social Protection and Support of Citizens under Sanctions on March 2.[33] Russian Foreign Minister Sergey Lavrov emphasized that Russia can withstand any pressure because “Russia has many friends, and it is impossible to isolate it” on March 2.[34] Lavrov said that sanctions against Russia are not in states’ interests.[35] Russian businesspeople and kleptocrats with ties to Putin have resigned from the boards of many international companies and are reportedly trying to sell off luxury real estate and other assets before European sanctions kick in.[36]

US, NATO, and EU Activity

The United States and the European Union (EU) implemented additional sanctions targeting Russia and Belarus while more companies suspended their operations in Russia on March 2.

The UN General Assembly voted overwhelmingly in favor of a motion demanding Russia stop military operations in Ukraine on March 2. Belarus, Syria, North Korea, and Cuba joined Russia in voting against the motion. China, India, and 33 other countries abstained from the vote.[60] Russian Representative to the UN Vasily Nebenzya claimed on March 1 that the West coerced the UN into condemning Russia.[61]

Russian President Vladimir Putin’s invasion of Ukraine has likely killed hundreds of Ukrainian civilians as of March 2. International organizations and Western leaders are increasingly voicing concerns about Russia’s indiscriminate targeting of civilians and alleged use of banned weaponry.

Global oil and gas prices skyrocketed despite Russia’s energy sector remaining largely unsanctioned as of March 2. White House press secretary Jen Psaki stated on March 2 that a future US ban on Russian oil exports is “not off the table.”[85] However, Principal Deputy Press Secretary Karine Jean-Pierre told reporters the US does not have a “strategic interest in reducing the global supply of energy.”[86]  Multiple US Republican officials called on US President Joe Biden to stop oil imports from Russia to the United States and to boost domestic production.[87] The OPEC+ alliance, which includes Russia, said it would not alter a July 2021 agreement to increase monthly production of oil by 400,000 barrels a day, despite the disruption to Russian oil exports. The United States and other major oil consumers have repeatedly called on OPEC+ to boost output to help calm inflation as oil prices have risen to an eight-year high.[88] Gas prices in Europe rose to a new high at 2,260 USD per thousand cubic meters according to data from the London Stock Exchange.[89]