The al Houthis, an armed Zaydi Shiite movement from Yemen’s north, has used violence and the threat of civil war to seize power in Sana’a. Its September 21 assault on the capital forced Yemen’s President, Abdu Rabbu Mansour Hadi, to dissolve his government and kick Yemen’s powerful Sunni political party, al Islah, out of power. The al Houthis and the Southern Movement, both of which have long been excluded from Yemeni politics, now have broad powers to shape Yemen’s future government. The al Houthi siege on Sana’a sets a dangerous precedent that could lead to the repartition of Yemen. The al Houthis, whether intentionally or not, have set Yemen on a path that puts the existence of an essential U.S. counterterrorism partner on the table.

The sudden power shift has broad repercussions for Yemeni politics and for regional dynamics. The Yemeni political elite bought into the 2011 political transition process after the Arab Spring that deposed then-President Ali Abdullah Saleh from power. The political transition kept a modicum of stability within Yemen and offered each political faction various opportunities to secure its own interests. Opposition forces, such as the al Houthis, southern secessionists, and a youth movement, elected to participate in hopes that they would be able to influence the process as well. The al Houthis, warily participated in the Gulf-backed National Dialogue Conference (NDC), a forum designed to air and finally address national grievances and a mechanism to limit the influence of Yemen’s entrenched political elites.[1] Yet, historical Yemeni powerbrokers continued to dominate state politics and the government. These include the al Ahmar family, which dominates one of Yemen’s two northern tribal confederations; General Ali Mohsen al Ahmar (not related), who led the Yemeni military in its six wars against the al Houthis; and Saleh’s party, the General People’s Congress.

When Dialogue Fails: the al Houthis Renew their Fight

Back room dealing among Yemen’s political elite resulted in an agreement to divide Yemen into a six-region  federation, leading the al Houthis to withdraw from the NDC in January 2014.[2] The proposed regions divided north Yemen and isolated Sa’ada governorate, the al Houthis’ stronghold, from resources and access to a port. Sa’ada had fallen under al Houthi control during the unrest in 2011, forming the backbone of an al Houthi “statelet.” A six-way partition and federalized Yemen would lessen the al Houthis’ independence in governing Sa’ada and bring the governorate back under state control. Sa’ada, one of the poorest regions in Yemen, was previously the site of the six Sa’ada Wars fought between the al Houthis and the Yemeni government after government forces killed al Houthi leader and founder, Hussein Badr al Din, al Houthi, in 2004.[3]

The al Houthis abandoned efforts to gain power through political dialogue, instead using force to weaken political enemies. A seven-month al Houthi military campaign culminated in the takeover of Amran  governorate, directly north of Sana’a, on July 8, moving the al Houthis’ influence closer to the capital.[4] It also delivered a blow to the al Ahmar family, which is closely affiliated with the Sunni al Islah (Reform) party. Hashid al Ahmar contributed tribal militias to support the Yemeni military in 2009-2010 during the last of the six Sa’ada Wars.[5] The takeover of Amran demonstrated the growing weakness of the al Ahmar family within the Hashid tribal confederation, seeing that it is unlikely the al Houthis could have moved into the al Ahmar tribal stronghold without local support.[6] The al Houthis also took over the local army base in Amran city, killing Brigadier General Mohammed Hamid al Qushaybi, commander of the 310th Armored Brigade. The 310th, formerly part of General Ali Mohsen’s First Armored Division, had participated in the fight against the al Houthis during the Sa’ada Wars.[7]

The al Houthis found an opening to take their fight to the capital in August 2014 after fuel subsidy cuts resulted in popular backlash against the Yemeni government. The International Monetary Fund had mandated fuel subsidy cuts in May 2014 as a precondition for a much-need loan to Yemen. The cuts went into effect in August and increased fuel prices by 90 percent. Yemenis, already taxed by the country’s poor economic conditions, protested.[8] The al Houthis swooped in on August 24 and used bulldozers to level ground for their protest tents in northern areas of Sana’a as well as in front of various government ministries.[9] The protests remained peaceful despite the use of riot tactics to break them up, but it became clear the al Houthis would not leave without getting concessions from the government.[10] The Yemeni government tried to negotiate with the al Houthis, even agreeing to the al Houthis’ main demands of re-subsidizing fuel prices and forming a new cabinet.[11] 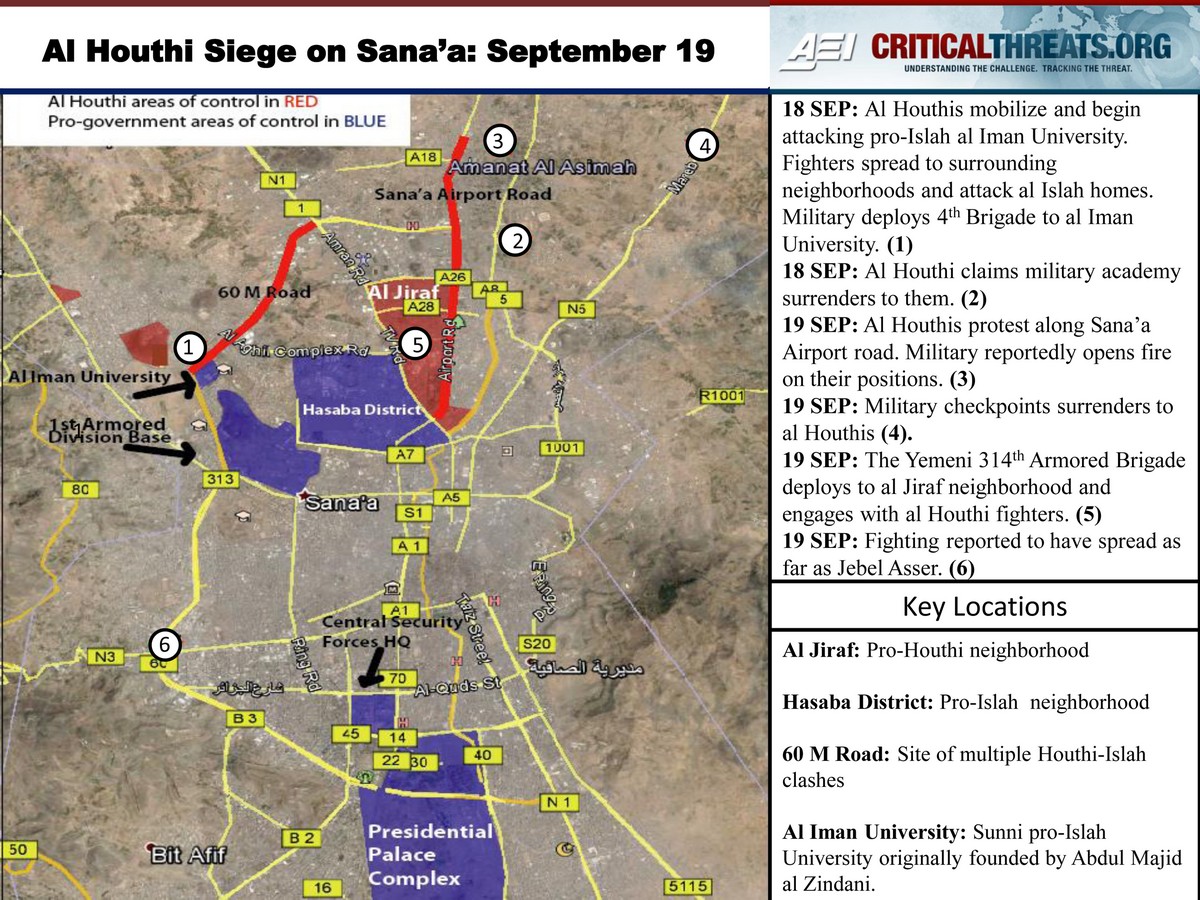 The Yemeni government’s concessions, however, were not enough to appease the al Houthis. In the capital, peaceful protests escalated into armed conflict on September 18. Militants started their offensive with a siege on al Iman University, established by one of the al Islah party founders and a former adviser to Osama bin Laden, Abdul Majid al Zindani.[12] The al Houthis simultaneously attacked the headquarters of state-run Yemen TV, forcing the 314th Armored Brigade to deploy to the area.[13] The al Houthis then targeted the base of Ali Mohsen’s former First Armored Division, now housing the Sixth Regional Military Command, on September 19.[14]

The al Houthis defeated the 314th Armored Brigade at the headquarters of Yemen TV on September 20 and overtook the nearby Revolution Stadium.[15] The al Houthis took complete control of al Iman University as well as the First Armored Division base by September 21, marking a turning point in the conflict.[16] Military units and government ministries began capitulating to the al Houthis. Soldiers stationed at the Defense Ministry abandoned their posts and did not interfere when al Houthis surrounded the Central Bank on September 21.[17] Yemen’s Armed Forces Moral Guidance Department, the department that controls the Yemeni military’s official news outlet, released a statement on September 21 declaring support for the al Houthis’ armed revolution.[18] The Yemeni Interior Ministry also ordered all its personnel to cooperate with the al Houthis.[19]

By September 21, it was clear the Yemeni government could not defeat the al Houthis in Sana’a. The UN Envoy to Yemen, Jamal Benomar, who had been trying to negotiate a peace deal with the al Houthis prior to the outbreak of violence, managed to mediate a humiliating deal with the militants. [20] The agreement gives the al Houthis and the peaceful faction of Yemen’s Southern Movement broad political powers and orders President Hadi to select a new government.[21] Both groups will choose representatives who will decide the allocation of cabinet seats for each political party and will advise President Hadi on candidates for the new government – meaning the al Houthis and Southern Movement now get to decide whom they want in the government.[22] 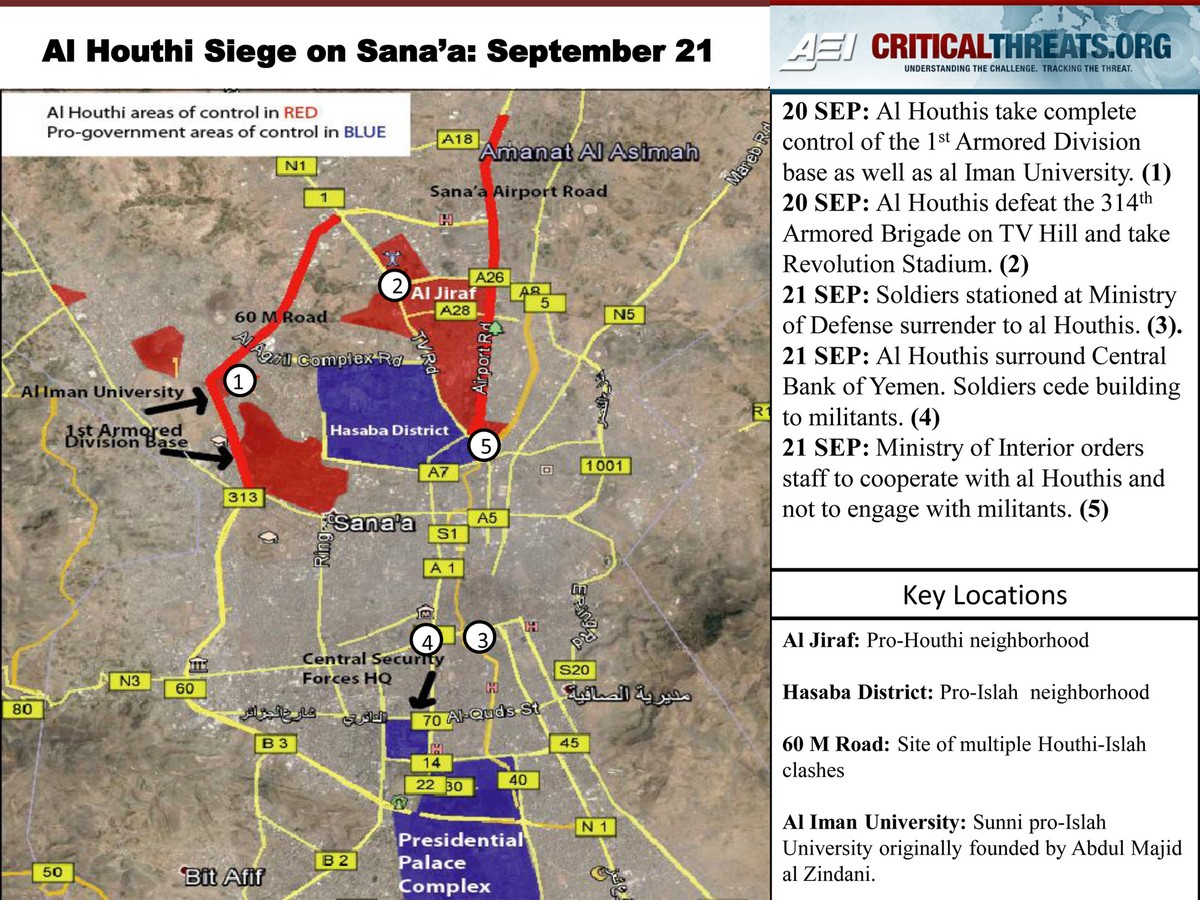 President Hadi and his government, considered ineffectual by many in Yemen, negotiated from a position of weakness and could not hold Yemen together at a critical moment.[23] Some of the al Houthi demands for a new government and reinstatement of fuel subsidies resonated among Yemenis who were still looking for improvements to their day-to-day lives in post-Saleh Yemen. Many of those in government opposed to the al Houthis, especially al Islah and the al Ahmars, continue to represent the established political elite and could not counter the al Houthi message. The other option would have been a civil war with the al Houthis, a battle Yemen’s overstretched military would not have been able to win. Each of the six rounds of fighting with the al Houthis in the Sa’ada Wars ended in negotiated ceasefires.[24]

On the Road to Repartition

The al Houthis, whether or not they intended to, may have set in motion a series of events that could lead to a divided Yemen. It is likely the al Houthis will demand a reworking of the six-region federation plan that they vehemently opposed back in January 2014.[25] This likely would prompt the Southern Movement to push for an independent south and the al Houthis a federally autonomous region in the north. Yemen was formerly divided into two before the resolution of its 1994 civil war united the country into its modern state. The Southern Movement is an umbrella organization composed of various factions that oppose historical northern domination over state affairs.[26] It is unclear whether the Southern Movement will push for independence, but some of its leaders have already stated their desire to secede.[27] A more concerted effort on the part of the South to gain independence as well as attempts to push the Yemeni military out of southern territory would indicate Yemen is on the path to repartition.

Iran, a country that seeks to be the region’s most formidable power, is delighted at Yemen’s new rulers and could use the opportunity to expand its influence further in Yemen.[28] Yemen has previously had Zaydi rulers, but the al Houthis are the first to call for the return of a religious-based government.[29] Iran has supported both the al Houthi and Southern movements in the past.[30] It is unclear if Iran had a direct role in facilitating these latest events, but Tehran will have a better chance of building up the al Houthis and Southern Movement as regional proxies while Yemen’s government is preoccupied with trying to keep itself together. A repartitioned Yemen would give Iran freer rein to carry out operations in Yemen against its regional rival, Saudi Arabia.

The break-up of Yemen would devastate U.S. counterterrorism strategy. The U.S. relies on Yemen’s military to combat al Qaeda in the Arabian Peninsula (AQAP), an organization that has tried and will continue to try to attack the U.S. homeland. Most of the forces the U.S. trains and works with operate in the southern and eastern provinces of Yemen. These units will most likely be removed from fighting AQAP to keeping the Yemeni state together if Yemen moves toward repartition or even federation. Such a scenario would cripple the current U.S. strategy against AQAP, empowering a group that is one of the greatest threats to the American homeland.