Russian forces have not abandoned efforts to reconstitute forces northwest of Kyiv to resume major offensive operations, and the commander of Russia’s Eastern Military District (EMD) may be personally commanding the operations. The Ukrainian General Staff reported that Russia’s 35th Combined Arms Army is rotating damaged units into Belarus and that Russian forces established a command post for all EMD forces operating around Kyiv in the Chernobyl area. Ongoing Russian efforts to replace combat losses in EMD units and deploy additional reinforcements forward are unlikely to enable Russia to successfully resume major operations around Kyiv in the near future. The increasingly static nature of the fighting around Kyiv reflects the incapacity of Russian forces rather than any shift in Russian objectives or efforts at this time. 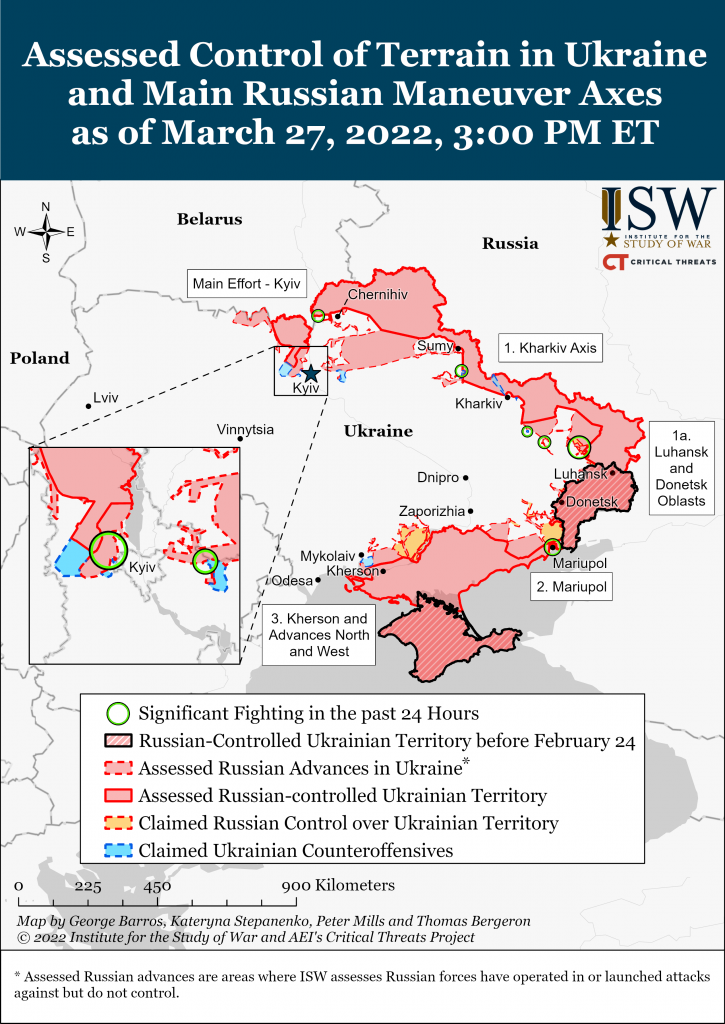 The Ukrainian General Staff continued to report Russian difficulties to replace personnel and equipment losses. The General Staff reported on March 27 that Russian forces are increasingly using old and substandard ammunition, leading to a rise in the rate of accidents at Russian arsenals and depots, particularly highlighting the use of old munitions by the 35th Combined Arms Army’s 165th Artillery Brigade, operating northwest of Kyiv.[1] The General Staff additionally stated that Russia has deployed up to nine logistics battalions and up to five “main logistics centers” to Ukraine to solve ongoing supply challenges.[2]

Russian Eastern Military District (EMD) Commander Colonel-General Alexander Chayko may be personally commanding efforts to regroup Russian forces in Belarus and resume operations to encircle Kyiv from the west. The Ukrainian General Staff reported at midnight local time on March 26 that units of the 35th Combined Arms Army are being withdrawn to the Chernobyl area and further into Belarus to restore combat capabilities and added at noon local time on March 27 that Russian air and artillery strikes are intended to provide cover for withdrawing units.[3] The Ukrainian General Staff and the Chernihiv Regional Administration separately reported on March 27 that Russian forces established a command post to control the grouping of Russian forces from the Eastern Military District (EMD) near Chernobyl and are stockpiling munitions in the area.[4] Pro-Russian telegram channels previously shared unverified footage they claimed depicted Chayko northwest of Kyiv on March 23, which may have depicted this reported command post.[5] The Kremlin is highly unlikely to have abandoned its efforts to encircle Kyiv, though ISW continues to assess Russia will be unable to cohere the combat power necessary to resume major offensive operations in the near future.

Neither Russian nor Ukrainian forces conducted major operations northwest of Kyiv in the last 24 hours. Kyiv Oblast civil authorities and the Ukrainian General Staff reported that Russian shelling concentrated on Bucha, Irpin, Hostomel, Borodyanka, and Makariv on March 27, though Russian forces do not appear to have conducted any ground attacks in the last 24 hours.[6] The Ukrainian Ministry of Defense additionally claimed that precision weapons fired by Russian warships destroyed a Ukrainian missile depot in Plesetske (southwest of Kyiv) on March 27, though we cannot independently verify this claim.[7] 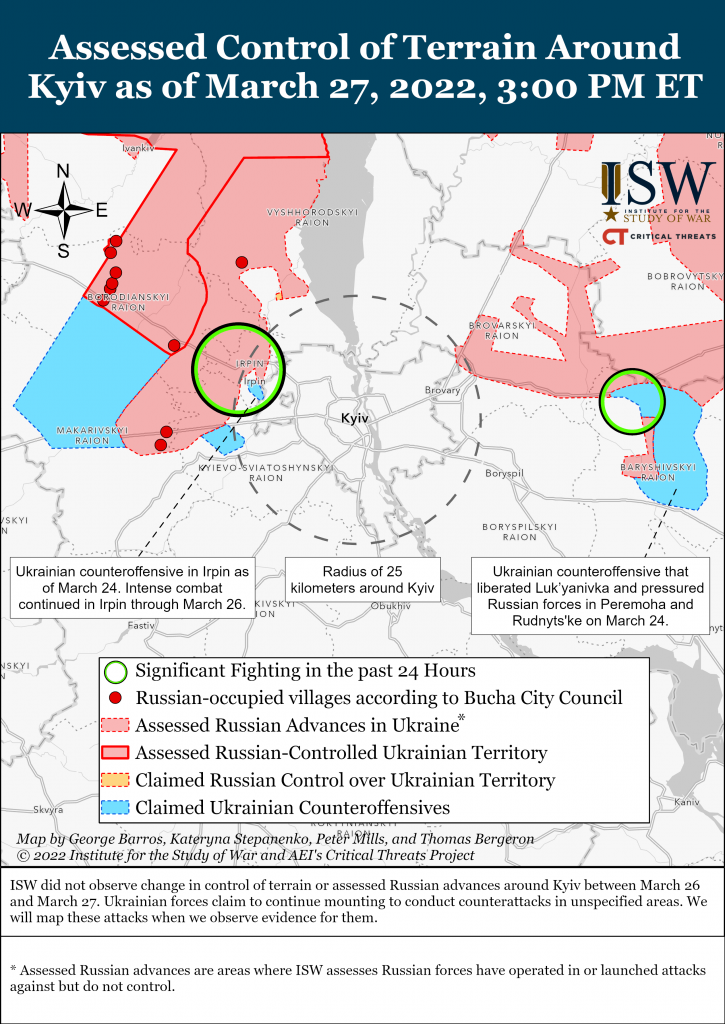 Russian forces did not conduct any offensive operations around Kharkiv city in the past 24 hours.[15] Ukrainian forces conducted a local counterattack toward Vilhivka, on the eastern outskirts of Kharkiv, on March 26-27 but do not appear to have recaptured the town.[16]

Fighting continued around Izyum in the past 24 hours, with little territory changing hands. Kharkiv Oblast civil authorities and social media users additionally confirmed that Ukrainian forces recaptured Husarivka (northwest of Izyum) and captured equipment from Russia’s 3rd Motor Rifle Division on March 27.[17] The Ukrainian General Staff reported at midnight local time on March 26 that three Russian battalion tactical groups (BTGs) are trying to gain a foothold in the areas of Kamyanka, Sinichyne, and Sukha Kamyanka (all southeast of Izyum) and local civilian authorities reported fighting was ongoing on March 27.[18]

Russian assaults on central Mariupol continued on March 27, though ISW cannot confirm any changes in control of terrain.[23] Russian forces will likely gain control of the city in the relatively near future. 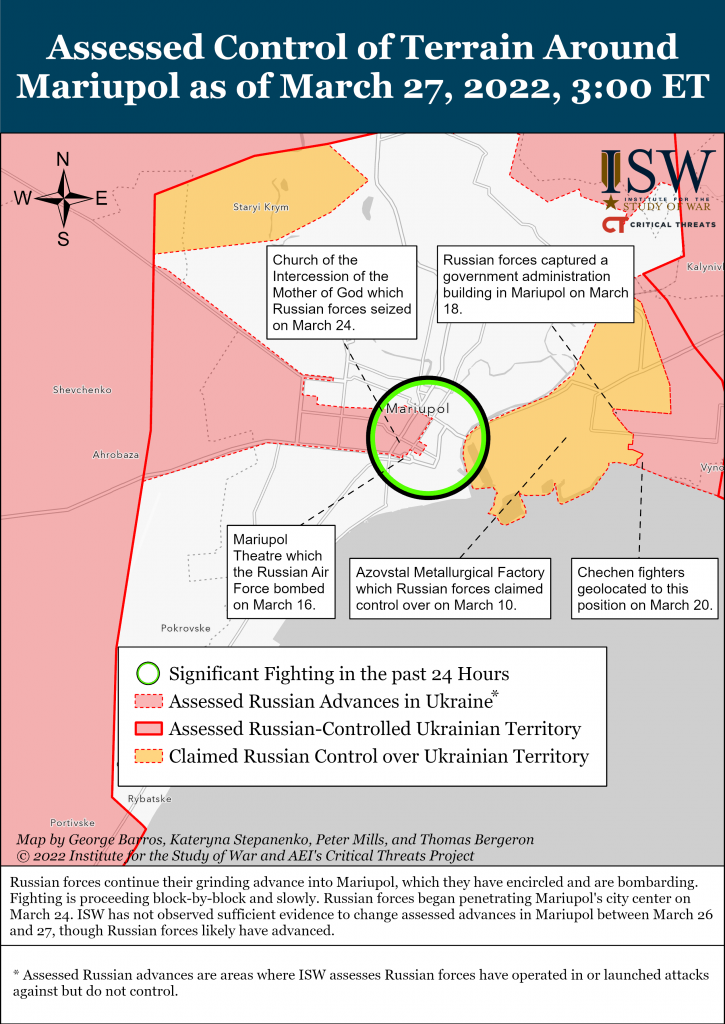 Russian forces did not conduct any offensive operations in the southern direction in the past 24 hours.[24] The Ukrainian General Staff reported that Rosgvardia units continue to fight centers of Ukrainian resistance in Kherson Oblast and other areas, confirming reports from March 26 that Ukrainian partisans are successfully contesting Russian control of Kherson.[25] The Odesa Oblast civil administration reported on March 27 that Russian forces are conducting aerial reconnaissance of Odesa and stated there is a high likelihood that Russian warships will strike Odesa.[26] However, an unsupported Russian amphibious landing on Odesa remains highly unlikely, and Russia has likely committed much of its Naval Infantry reserves to fighting in Mariupol.