Key Takeaway: Competition between Russia and Turkey continued to escalate in 2020. The parties redoubled their commitments to opposing sides in Syria and Libya, and Turkey opened a new theater of competition in the Caucasus. Each of these conflicts is unique and discrete but must be understood within the cross-theater dynamics of Russia-Turkey competition. 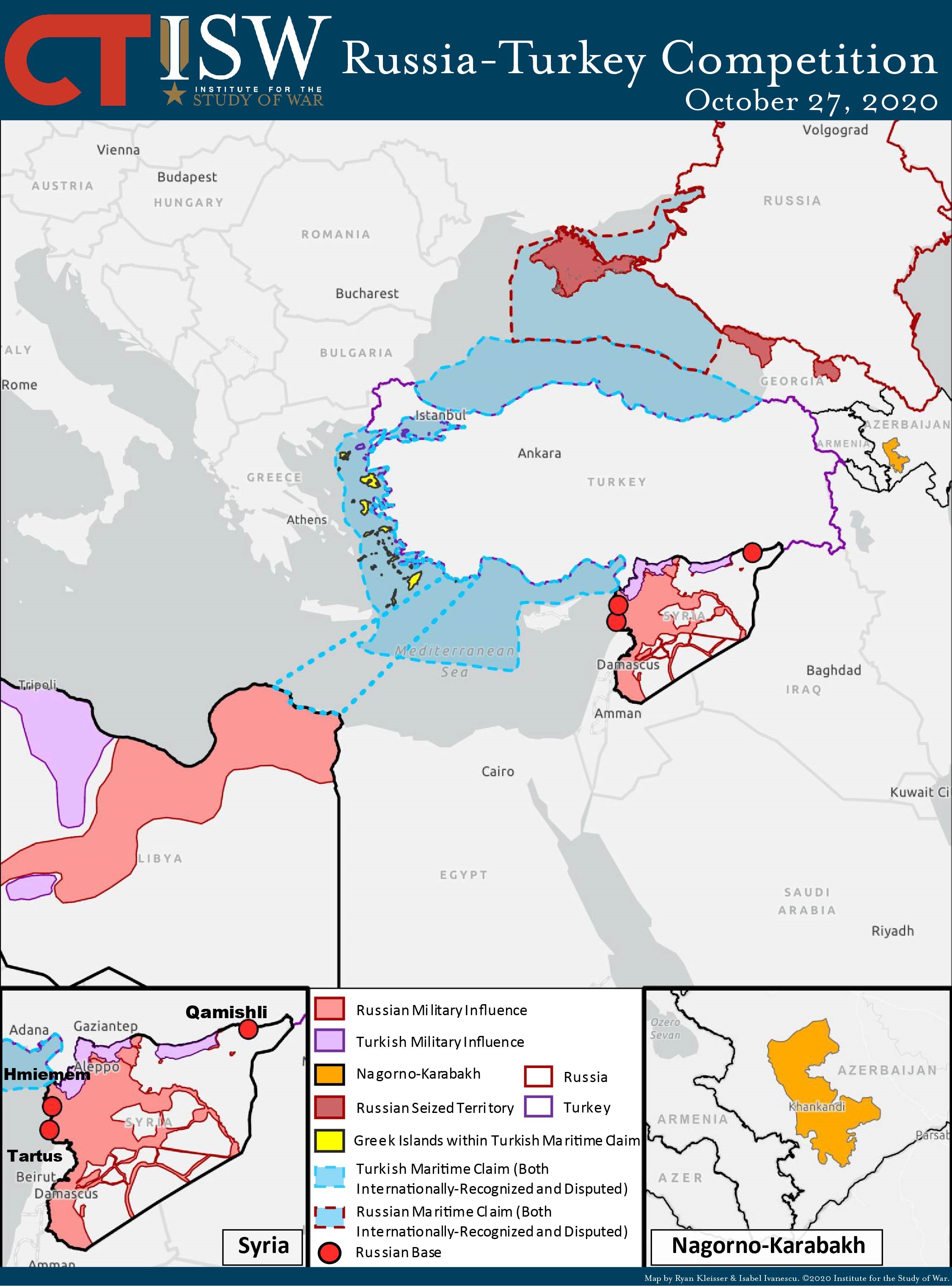 Russia and Turkey are supporting belligerents on opposite sides of three conflicts – in Syria, in Libya, and in Nagorno-Karabakh – and are competing for influence in the Black Sea and the Mediterranean. Russia-Turkey competition is not a new phenomenon but has escalated as both countries have adopted more ambitious foreign policy objectives and expanded their regional influence in the past decade.

The situation in Syria is precarious; Syria remains a priority effort for both Russia and Turkey while the two parties are increasingly at odds. Turkey views Syria as core to its national security, fearing both a renewed refugee influx and autonomous Kurdish governance on the Turkish border. is a critical venue for projecting power in the Middle East and Mediterranean and pressuring the United States. Turkish occupation of swathes of northern Syria and Russian freedom of action throughout regime-held areas has resulted in a shaky balance. Turkey and Russia have been facing off in opposition-held greater Idlib to pressuring one another into a negotiated settlement since mid-September 2020.[1] Turkish and Russian proxies are also manning opposing, but stable front lines in Syria’s northeast. Moscow or Ankara must alter this balance, through diplomacy or force, if either is to achieve its objectives. The Russian air force carried out one of the deadliest-ever Russian airstrikes in Syria targeting a Turkish proxy in Idlib on October 26 in a possible play to shift the situation in Syria or impose costs on Turkey for actions elsewhere.[2]

Russia and Turkey back opposing parties in Libya and will likely remain militarily engaged despite a recent ceasefire. Turkey intervened in Libya in January 2020 to halt the advance of forces backed by geopolitical opponents Egypt, the United Arab Emirates, and Russia on Tripoli, while carving out a Turkish maritime sphere of influence in the eastern Mediterranean. Turkey’s intervention derailed Russia’s campaign in Libya but produced intensified Russian engagement. The Kremlin remains committed to establishing permanent Russian basing and access to Libya’s oil supply, even amid constraints imposed by Russia’s own local partners and regional allies. Russia and Turkey are locked in an armed race for influence in Libya below the level of outright conflict. The parties are unlikely to pull away from Libya even while a purported “permanent ceasefire” signed by their respective local partners on October 23 calls for the withdrawal of all foreign forces.[3]

Recent hostilities in Nagorno-Karabakh are both born of and further fueling Russia-Turkey competition. Turkey coordinated with Azerbaijan to reignite the long-standing conflict between Armenia and Azerbaijan over disputed territory Nagorno-Karabakh in September.[4] Ankara sees the conflict as a low-cost opportunity to solidify a Turkish foothold in the Caucasus and challenge growing bilateral ties between Baku and Moscow while profiting from arms sales to Azerbaijan. Russia brokered two failed ceasefires since fighting began in September 2020 in a bid to keep both Armenia and Azerbaijan within its sphere of influence. The Kremlin seeks rapid de-escalation in Nagorno-Karabakh with minimum Russian investment. Russia’s neutrality is an opportunity for Ankara to cash in rapid Azerbaijani territorial gains for regional influence without triggering a Russian escalation. A new ceasefire—brokered by the US without Russian involvement—went into effect on October 26 with both Armenian and Azerbaijani violations reported within hours.[5]  The Kremlin may attempt to compel a resolution by force in response to Turkey’s growing military role and the United States’ growing diplomatic role in the conflict, reasserting Russia’s role as the sole powerbroker in the Caucasus. ISW has not observed indicators of an imminent Russian deployment to Armenia, however.

Developments in Syria, Libya, and Nagorno-Karabakh cannot be analyzed in a vacuum, but must instead be contextualized in the landscape of cross-theater Russia-Turkey competition. The two revisionist powers will likely continue to search for a comparative advantage, including by establishing new and advantageous theaters for competition or further investing in existing theaters. Seemingly inexplicable Russian or Turkish decisions in one theater may be readily understandable when considered alongside developments in another theater. A Russian or Turkish decision to commit resources in a new area, if not obviously compatible with policy objectives, may well result from a desire to obtain leverage over the other party. Whether Russia-Turkey competition de-escalates through negotiations or escalates kinetically, it will have profound and lasting effects in the Middle East, North Africa, and the Caucasus.