The Afghan Taliban has moved swiftly to consolidate control over Afghanistan and eliminate any opposition to its rule since the August 2021 collapse of the Afghan Republic. The Taliban claim to rule all of Afghanistan for the first time in 40 years. Armed groups opposed to the Taliban remain active in the country, however. Anti-Taliban groups fall into two main categories: Islamic State–aligned groups and non–Salafi-jihadi resistance groups.

Click here to see an interactive map of armed groups in Afghanistan.

Activity Zone: An area where a group’s activity is reported and where it may recruit, but in which it does not regularly attack and is subject to enemy action. 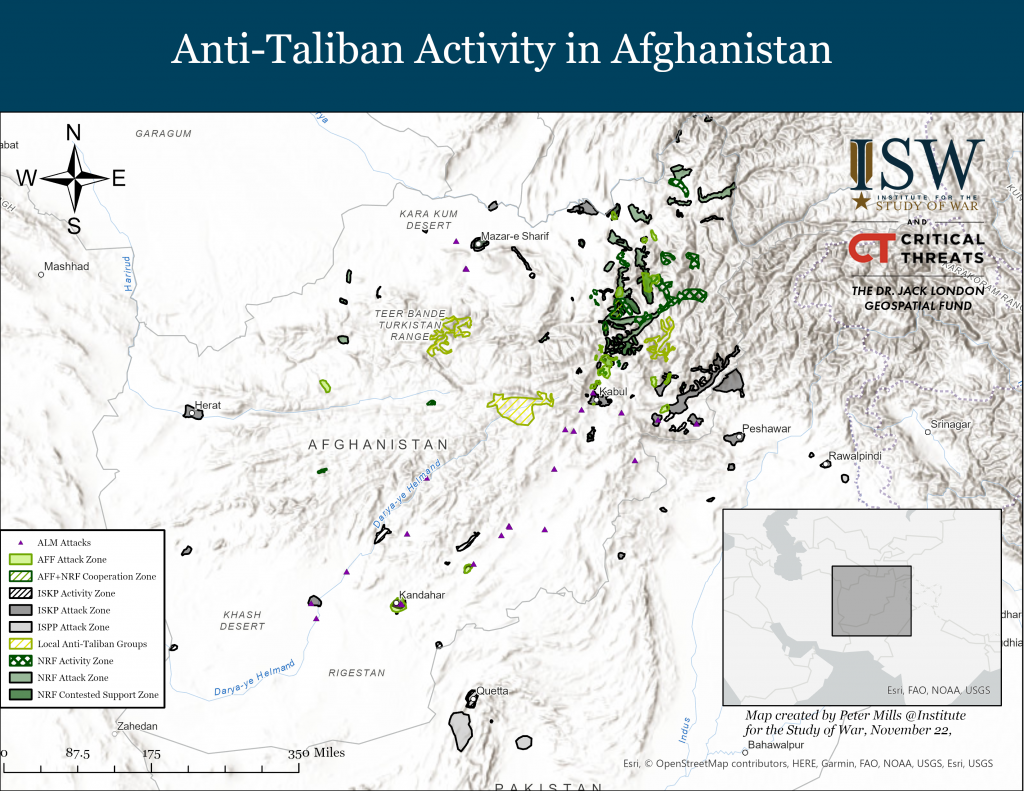 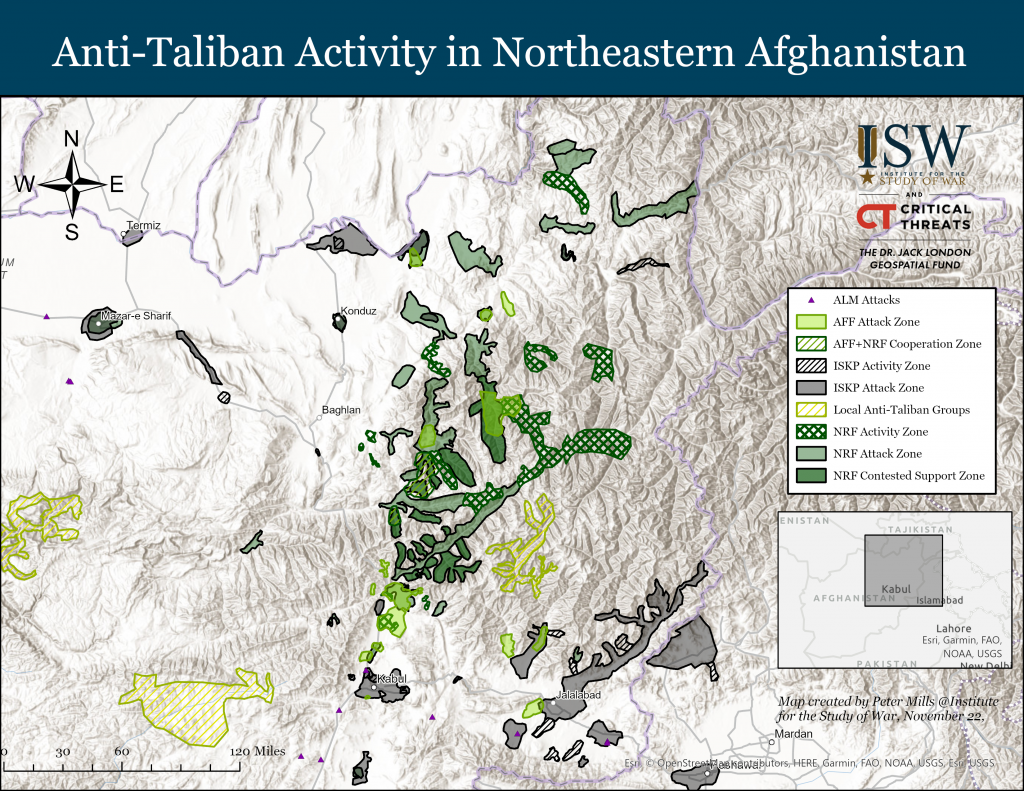 Islamic State Khorasan Province (ISKP) is the primary Islamic State affiliate in South Asia. ISKP has attempted to exploit the collapse of the Afghan Republic and recover from prior defeats suffered in 2019. Defecting commanders from the Pakistani Taliban, the Islamic Movement of Uzbekistan, and other organizations defected and formed ISKP in early 2015.[1] ISKP’s primary base of operations lay in eastern Afghanistan from 2015-2019 but it also controlled a few districts in northwestern and southern Afghanistan. US and Taliban offensives largely destroyed ISKP’s ability to control territory in Afghanistan by 2019.[2] Since 2021, ISKP has attempted to rebuild itself by reincorporating approximately 2,000 prisoners after the fall of Kabul and expanding its propaganda and recruitment efforts toward Uzbeks and Tajiks.[3] ISKP’s attacks primarily aim to undermine the Taliban efforts to build a government and consolidate control over Afghanistan by targeting Taliban fighters, officials, and religious leaders.[4] ISKP directs its deadliest attacks toward religious minorities in Afghanistan— particularly members of the Shi’a Hazara community. ISKP does not yet appear strong enough to control territory as it did prior to 2018-2019, but it may be regenerating its presence in areas it formerly controlled in Nangarhar and Kunar Provinces.

Islamic State Pakistan Province (ISPP) is an Islamic State affiliate announced in 2019 which operates in Pakistan. ISPP is likely subordinate to ISKP as its area of operations was covered by ISKP prior to 2019.[5] ISKP maintains responsibility for operations in Khyber Pakhtunkhwa Province in Pakistan while ISPP claims attacks in Balochistan and Punjab Provinces.[6] ISPP carries out fewer attacks than ISKP in Pakistan and likely has a limited capability compared to ISKP.

The largest of these groups is the National Resistance Front (NRF), which operates predominantly in northeastern Afghanistan. The NRF’s leader is Ahmad Massoud, son of legendary mujahideen commander Ahmad Shah Massoud. The NRF evolved from Ahmad Massoud’s “Second Resistance” group, which began organizing in 2019 in preparation for the Afghan government’s collapse. The NRF operates in mostly Tajik areas of Afghanistan, especially within and alongside the Panjshir Valley. The group has also claimed attacks elsewhere in northern and western Afghanistan and has steadily increased operations in neighboring provinces—such as Takhar and Badakhshan—throughout 2022.[7]

The NRF was the best-positioned and best-organized non–Islamic State non-state actor to fight the Taliban after the collapse of the Afghan Republic. Still, the Taliban conquered the Panjshir Valley in early September 2021. The NRF reorganized and switched to conducting insurgent attacks against Taliban forces occupying northeastern Afghanistan. The NRF has cooperated sporadically with other local and non-local anti-Taliban groups, including the Andarab Resistance Front and the Afghanistan Freedom Front (AFF), particularly in Baghlan Province.

Several smaller anti-Taliban groups have also emerged since August 2021. Former governor of Takhar Province and Afghan National Army (ANA) Chief of Staff, Yassin Zia, leads the Afghanistan Freedom Front (AFF).[8] The AFF operates across ethnic boundaries in both southern and northeastern Afghanistan.[9] Another former ANA officer, Abdul Matin Sulaimankhel, reportedly leads the Afghanistan Islamic National Liberation Movement, sometimes referred to as the Afghanistan Liberation Movement (ALM), active in southern and eastern Afghanistan.[10] Many even smaller anti-Taliban groups have declared their intent to resist the Taliban government, but have yet to conduct attacks.

Localized anti-Taliban dissent is present in several districts in Afghanistan. This activity is labeled “Local Anti-Taliban Groups” on the map. Anti-Taliban activity in these areas varies by district, ranging from open revolt to major protests. Below is a brief description on the ongoing situation in each district.