Pakistan continues to endure the worst flooding in its history and many towns and villages are still being evacuated as the floodwaters move downstream through Sindh and eventually into the Arabian Sea. As of August 23rd, over 20 million people have been affected of whom more than four million are homeless, and in excess of eight million are in urgent need of humanitarian aid. Recovering from a natural disaster of this magnitude will take many years and billions of dollars.

The effects of the flood extend beyond the humanitarian. Parts of the country such as the Swat valley, recently recovering from military operations in 2009 aimed at ending Taliban domination of the area, have been utterly destroyed in the flooding. Much of the army’s counterinsurgency effort in the area has been undone and the local population, which had only recently resettled after fleeing the fighting, has been displaced a second time. Some charitable organizations with ties to terrorist groups have also taken advantage of the government’s slow response to the crisis by attempting to fill the governance gap and extend their grassroots support. Groups like Jamaat-ud-Dawa (JuD), widely believed to be a front for Lashkar-e-Taiba (LeT), and operating under a new alias, Falah-e-Insaniat (FeI), have established camps across the flooded areas and are providing humanitarian aid to people who have, in many cases, yet to be reached by government authorities.

CTP has produced several maps and charts tracking the floods and its effects across the country to illustrate the magnitude of the disaster, its ramifications on the population and the fight against militant Islamist groups, and to follow the international aid response to the crisis. Maps tracking the severity of the flooding by district and the known locations of JuD/FeI camps across the country are among the data included.

·      I. Map of flooding extent and Flood-affected districts by severity

·      IV. Known Locations of of Aid Camps run by Jamaat-ud-Dawa/Falah-e-Insaniat

Map of flooding  Extent and flood-affected districts by severity 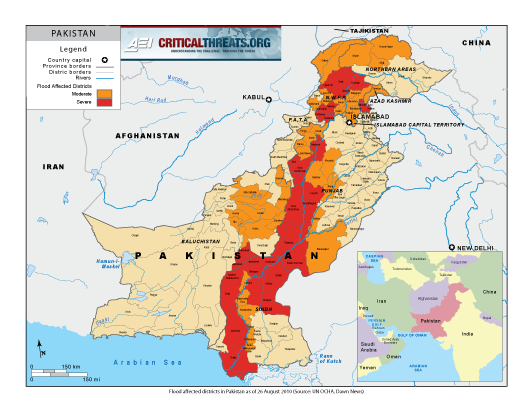 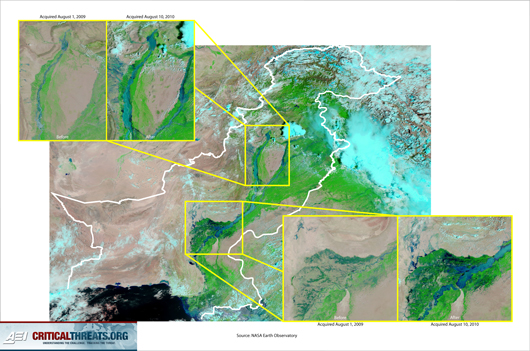 Note: This does not represent an exhaustive list of camps. Falah-e-Insaniat claims to run over 150 camps across the flood affected areas including Sindh, but no central list is provided. The above represents only those locations that could be independently confirmed and will be updated as more information becomes available.

Click graph to enlarge
Note: Figures reflect data reported by the UN OCHA. Figures reported do not necessarily reflect latest totals as there is a lag time between when additional aid is announced and when it is accounted for by the UN OCHA.