After the Flood, A Stream of Radical Islamists

Pakistanis could be forgiven for thinking they are jinxed while their country endures one tragedy after another. Just days after an air crash killed 152 in Islamabad in the worst accident in Pakistan’s aviation history, severe flooding inundated large swaths of Khyber Pakhtunkhwa Province, formerly the North West Frontier Province. The flooding, beyond human and material damage, has undone months of intense counterinsurgency efforts and allowed militant Islamist groups to burnish their image as the providers of humanitarian aid.

The flooding is the worst in Pakistan’s history and the worst the region has seen in more than 80 years. The UN now says the flooding has eclipsed the scale of devastation seen during the 2004 tsunami and the earthquakes that hit Pakistan in 2005 and Haiti in 2010. Over 1,600 people have died thus far, and the UN High Commissioner for Refugees estimates that 1.5 million people have been displaced and more than 13.8 million people have been affected by the rising waters. Whole villages remain under water, and the torrential downpour continues to hamper ongoing rescue efforts.

Swat, one of the areas hardest hit by the flooding, suffered more than two years of Taliban domination before the Pakistani army launched an offensive there in May 2009. Since then, Swat has been slowly reacquainting itself with peace. The severe flooding has, however, undone much of the reconstruction and economic rehabilitation effort. Crops have been inundated, livestock killed, homes and businesses submerged, and many of the district’s oldest and most famous hotels—a crucial part of the tourism industry that is the district’s lifeblood—have been washed away.

The flooding risks undoing much of the counterinsurgency campaign in Swat. Following last year’s operation, the military began rebuilding much of the district’s transportation infrastructure that had been destroyed during the course of the offensive. The floodwaters have, however, severely damaged roads and washed away virtually every bridge in the district. The breakdown in the road network has meant that much of the rescue effort has been forced to rely on airlift.

The army’s reconstruction projects helped gain the trust of local Swatis. The enduring security, underwritten by a large military presence, allowed a return to normalcy that had escaped the region for years. Yet the poverty and hardship brought by the flooding and disaffection with the government’s slow response to the crisis risks allowing the Taliban to once again gain a foothold. 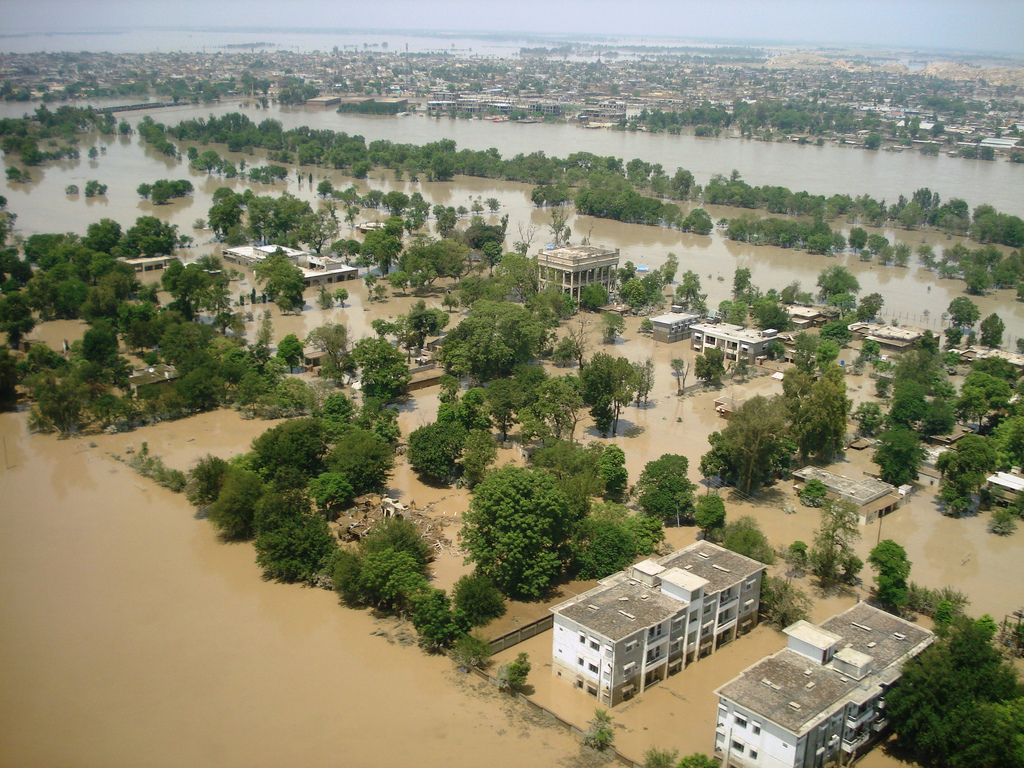 An aerial view of the flooding in Pakistan (photo by

Anti-government protests have broken out in some areas. Food and supplies have been slow to reach the displaced, and aid trucks have sometimes been ransacked. Prices for key commodities have, in some places, tripled, and crop and farmland destruction has been widespread. Following some of its worst wheat shortages, Pakistan last year saw a bumper wheat crop. The government did little to improve its storage capacity, and enormous quantities of unsold wheat are said to have rotted by the side of the road.

Groups such as Jamaat-ud-Dawa (JuD) have stepped into the vacuum to provide relief aid and social services to those affected by the flooding. JuD has already established 13 relief camps in surrounding districts, providing food to the displaced and running an ambulance service. JuD now says it has 2,000 members working in the region. The group claims to be involved solely in charitable work but is widely believed to be a front for the terrorist group Lashkar-e-Taiba, responsible for the 2008 Mumbai attack. JuD gained renown after the 2005 earthquake in Pakistan, when it was one of the only groups operating an effective aid and relief service in the affected region, often eclipsing the government’s own efforts and providing help to areas that the authorities sometimes took days or weeks just to reach.

As long as government incompetency and inadequacy continues to hamper the relief effort, it will be impossible to deny groups like JuD the space to operate. By working effectively during times of severe need, groups like JuD, much like Hezbollah, are able to burnish their image as charitable organizations and extend their networks of grassroots support. While doing real good, however, they are also providing a front for the more insidious and violent activities of their militant wings.

Pakistan’s floods have assaulted a nation already in mourning and increased the hardships for people who have seen little peace over the last few years. An inadequate government response to the crisis has caused outrage and allowed groups with terrorist ties to increase their support. The destruction has caused major reversals in the Swat counterinsurgency effort that was beginning to show signs of real success. Recovering and rebuilding after a setback like this will be a real opportunity to display true capacity for governance. One can only hope it is the government that fills those shoes.

Reza Jan was recently in the Swat Valley conducting research on the Taliban insurgency in northwest Pakistan. He is the Pakistan Team Lead at AEI’s Critical Threats Project