The Kremlin is responding to the defeat around Kharkiv Oblast by doubling down on crypto-mobilization rather than setting conditions for general mobilization. Chechen leader Ramzan Kadyrov called on all federal subjects to initiate “self-mobilization” and not wait on the Kremlin to declare martial law.[2] Kadyrov claimed that each federal subject must prove its readiness to help Russia by recruiting at least 1,000 servicemen instead of delivering speeches and conducting fruitless public events. Russian propagandist Margarita Simonyan echoed the need for Russians to volunteer to join the war effort, and several loyalist Russian governors publicly supported Kadyrov’s speech.[3] The Russian-appointed head of occupied Crimea, Sergey Aksyonov, announced the formation of two volunteer battalions on the peninsula in support of Kadyrov’s calls.[4]

The defeat around Kharkiv Oblast prompted the Kremlin to announce a Russia-wide recruitment campaign. Kremlin officials and state media had not previously made country-wide recruitment calls but had instead tasked local officials and outlets to generate forces ostensibly on their own initiative. Kremlin Spokesperson Dmitry Peskov vaguely welcomed the creation of the battalions on July 12, while 47 loyalist federal subjects advertised and funded the regional volunteer battalion recruitment campaign.[5] A prominent Russian milblogger and a supporter of general mobilization praised officials such as Kadyrov for taking the recruitment campaign from the ineffective Russian Ministry of Defense; this recruitment revamp is likely to secure more support for the Kremlin among nationalist figures who are increasingly critical of the Russian MoD, even if the drive does not generate large numbers of combat-effective troops.[6]

The Kremlin has likely abandoned its efforts to shield select federal subjects from recruitment drives, which may increase social tensions. ISW has previously reported that the Kremlin attempted to shield Moscow City residents from reports of the formation of the Moscow-based “Sobyaninsky Polk” volunteer regiment.[7]  Russian opposition outlet The Insider noted that several groups in the republics of Buryatia, Kalmykia, Tyva, and Yakytia (Republic of Sakha) are publicly opposed to the Kremlin's emphasis on recruitment on an ethnic basis.[8] Simonyan’s statement about “self-mobilization” prompted numerous negative comments among Russians calling on Russian oligarchs to pay for and fight in the war.[9]

The Kremlin has almost certainly drained a large proportion of the forces originally stationed in Russian bases in former Soviet states since Russia’s full-scale invasion of Ukraine began in February, likely weakening Russian influence in those states. A Radio Free Europe / Radio Liberty (RFE/RL) investigation reported on September 14 that the Russian military has already deployed approximately 1500 Russian personnel from Russia’s 201st Military Base in Dushanbe, Tajikistan, to Ukraine since the full-scale invasion began and plans to deploy 600 more personnel from facilities in Dushanbe and Bokhatar, a southern Tajik city, in the future.[10] RFE/RL additionally reported on September 13 that Russia has likely redeployed approximately 300 Tuvan troops from the Russian Kant Air Base in Kyrgyzstan to fight in Ukraine at varying points since late 2021.[11]

The withdrawals from the Central Asian states are noteworthy in the context of border clashes between Kyrgyzstan and Tajikistan. Tajik and Kyrgyz border guards exchanged fire in three separate incidents on September 14, killing at least two people.[12] The uptick in violence between Tajikistan and Kyrgyzstan, both of which are members of the Russian-controlled Collective Security Treaty Organization (CSTO), comes alongside renewed aggression by Azerbaijan against CSTO member state Armenia. Russian forces also withdrew 800 personnel from Armenia early in the war to replenish losses in Ukraine, as ISW has previously reported.[13] 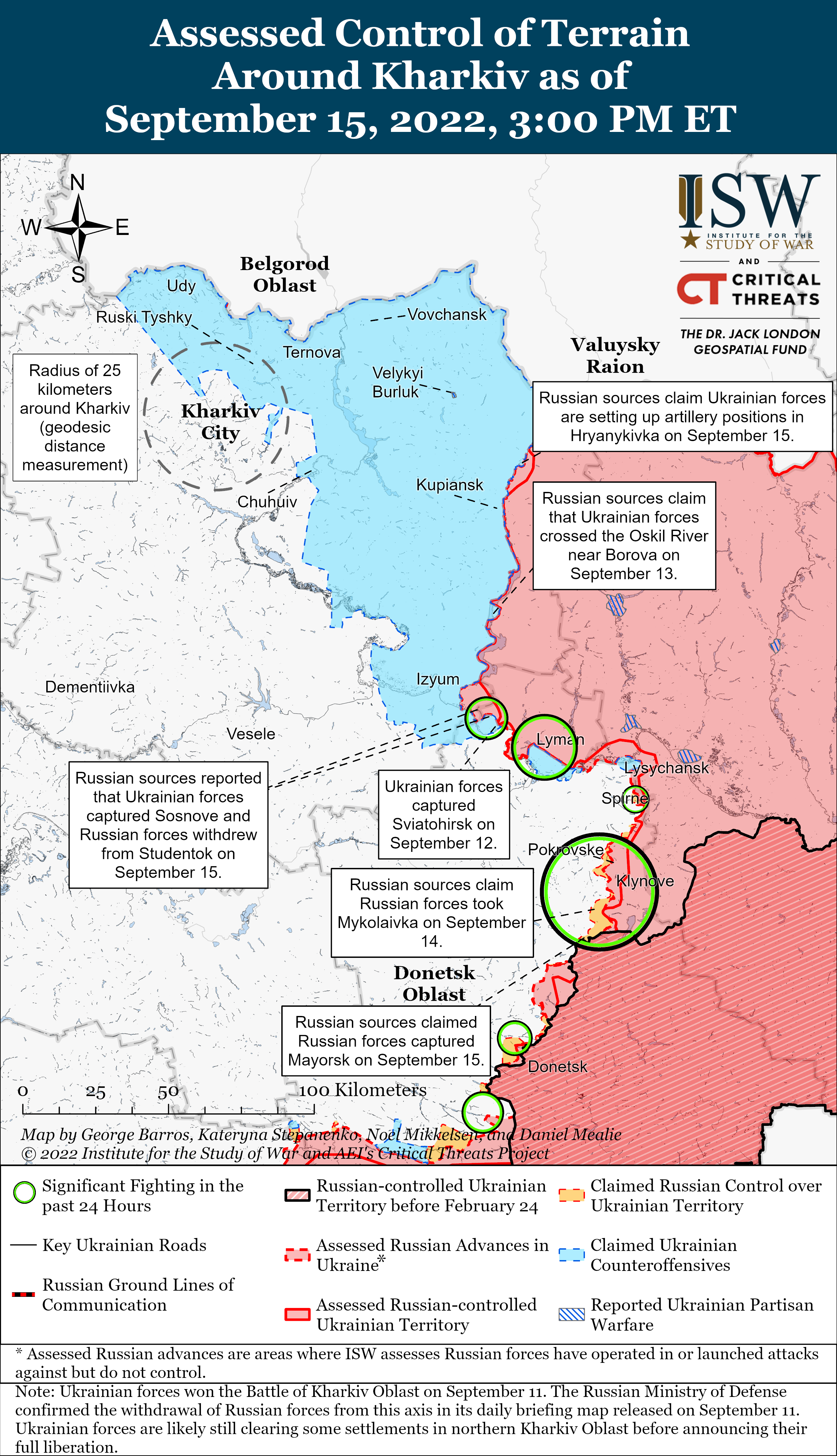 Ukrainian forces continued counteroffensive operations in eastern Ukraine, setting conditions to drive deeper into the Russian rear in eastern Kharkiv and western Luhansk oblasts. A Russian source claimed that Ukrainian forces expelled Russian forces from Sosnove on the north bank of the Siverskyi Donets River and are fortifying positions at the settlement.[14] The source also reported that Russian forces may have pulled out from Studenok immediately west of Sosnove to avoid encirclement.[15] Official Russian and Ukrainian sources reported that Russian forces reinforced Russian positions in Lyman.[16] The Ukrainian General Staff reported that the heavily reduced remnants of the Luhansk People’s Republic (LNR) 2nd Army Corps 202nd and 204th Motorized Rifle Regiments were disbanded into reserves, possibly meaning that the remnants of these reduced elements reinforced the Russian Combat Army Reserve (BARS) elements fighting in Lyman.[17]

Ukrainian forces continued operations to disrupt Russian logistics in eastern Ukraine and pin Russian forces away from the frontlines. Ukrainian forces reportedly struck rear areas in occupied Luhansk Oblast, including Lysychansk, Svitlodarsk, Perevalsk, and Kadiivka, all situated along major Russian GLOCs.[20] Imagery shows the aftermath of a Ukrainian strike on a Russian base in Lysychansk.[21] Russian and Ukrainian sources engaged in artillery duels across the Kharkiv-Belgorod Oblast border.[22] 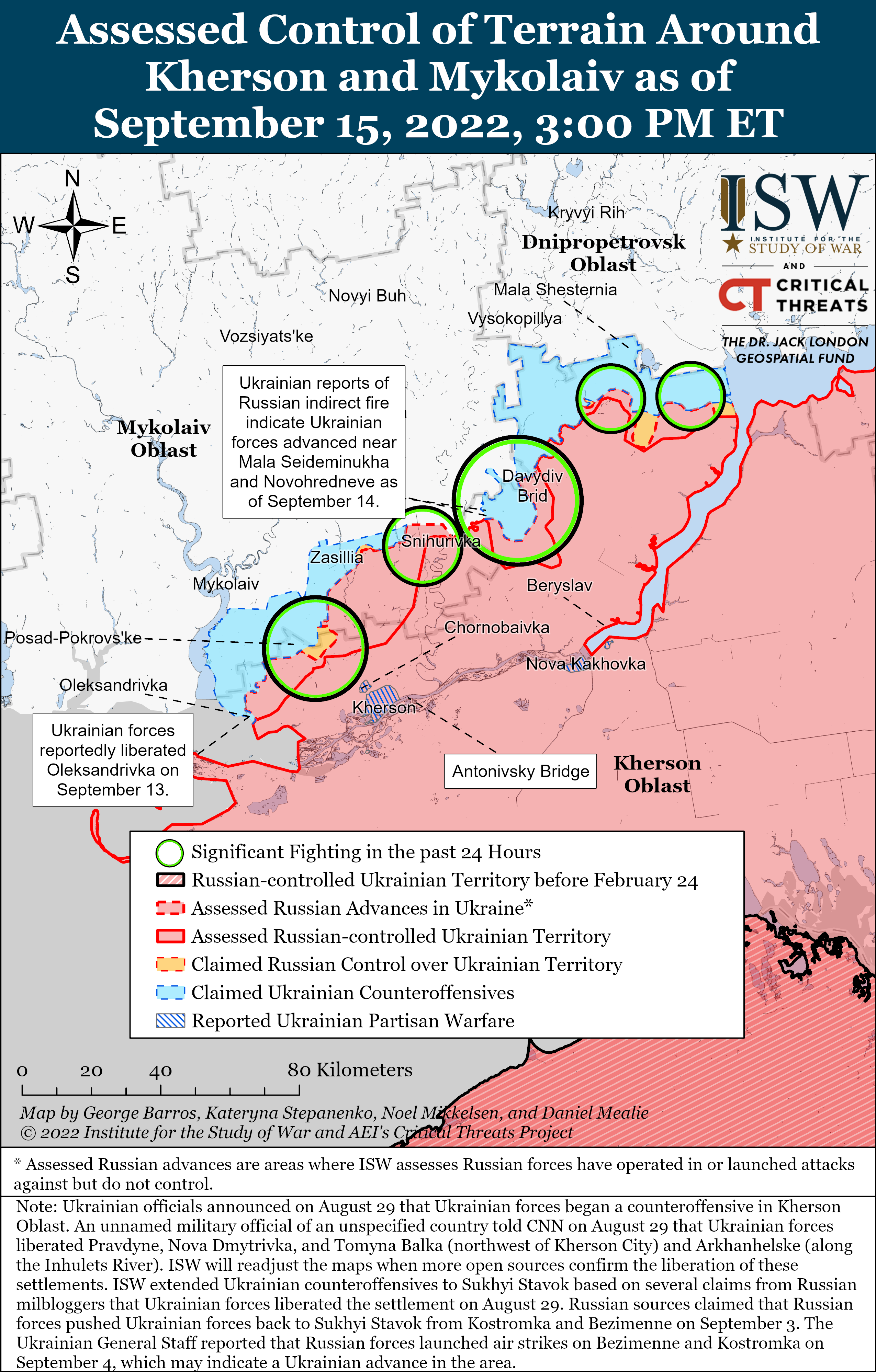 Ukrainian military officials are continuing their operational silence regarding the progress of the southern counteroffensive, noting that Ukrainian forces are continuing to improve their tactical positions and are engaged in positional battles.[23] Ukrainian local sources stated that there is no official confirmation that Ukrainian forces have liberated Kyselivka northwest of Kherson City but noted receiving local reports that Russian forces are mining all of the roads in the settlement.[24] Ukrainian officials did not report changes in Russian troop composition, but social media footage showed a Tuva Oblast flag in Beryslav, which likely indicates that Russian forces are continuing to reinforce northern Kherson Oblast with regionally formed volunteer units.[25] Conventional Russian military units typically do not fly republic or federal subject flags.

Ukrainian military officials stated that Ukrainian forces are continuing their interdiction campaign, targeting Russian ground lines of communication (GLOCs) across the Inhulets and Dnipro Rivers.[26] Ukrainian military officials noted that Russian forces are continuing to transfer equipment across the Dnipro River, however.[27] Ukrainian forces reportedly struck areas of Russian manpower and equipment concentrations in the Kherson City suburbs and in Krynychanka (about 21km southeast of the Ukrainian bridgehead over the Inhulets River).[28] The Ukrainian Southern Operational Command noted that Ukrainian forces damaged Russian ammunition depots in Sadove (about 15km southwest of Snihurivka) and Mykolaiv and Kherson raions, and struck the unmanned aerial vehicle (UAV) control center in Komyshany, northwest of Kherson City.[29] Ukraine’s Department of Strategic Communications (StratCom) reported that Ukrainian forces destroyed a Russian military base in Nova Kakhovka, and local footage and reports corroborated StratCom’s information.[30] Other social media reports noted Ukrainian strikes on Russian positions in Oleshky, on the left bank of the Dnipro River.[31]

Russian-appointed occupation officials and milbloggers claimed that Ukrainian forces conducted a landing at the Kinburn Spit (CorrectionA previous version of the text incorrectly stated "a narrow peninsula of the Crimean Peninsula."a narrow peninsula in Kherson Oblast southwest of Kherson City) on September 14, but offered differing accounts. Several milbloggers amplified the claims of a single source that suggested Ukrainian forces conducted an unsuccessful amphibious landing at the Kinburn Spit with five boats. The source also claimed that there was an unconfirmed report of a heliborne landing at the Iron Port in Lazurne, about 60km southwest of Kherson City.[36] Deputy Head of the Russian occupation administration in Kherson Oblast Kirill Stremousov claimed that Russian forces repelled the attempted landing and killed over 120 Ukrainian airborne troops at the Kinburn Spit.[37] Another milblogger criticized Stremousov and pointed out that his sources within Russian units in the area did not witness or repel any Ukrainian landing attempts and that Stremousov did not present any visual evidence supporting his claim.[38] 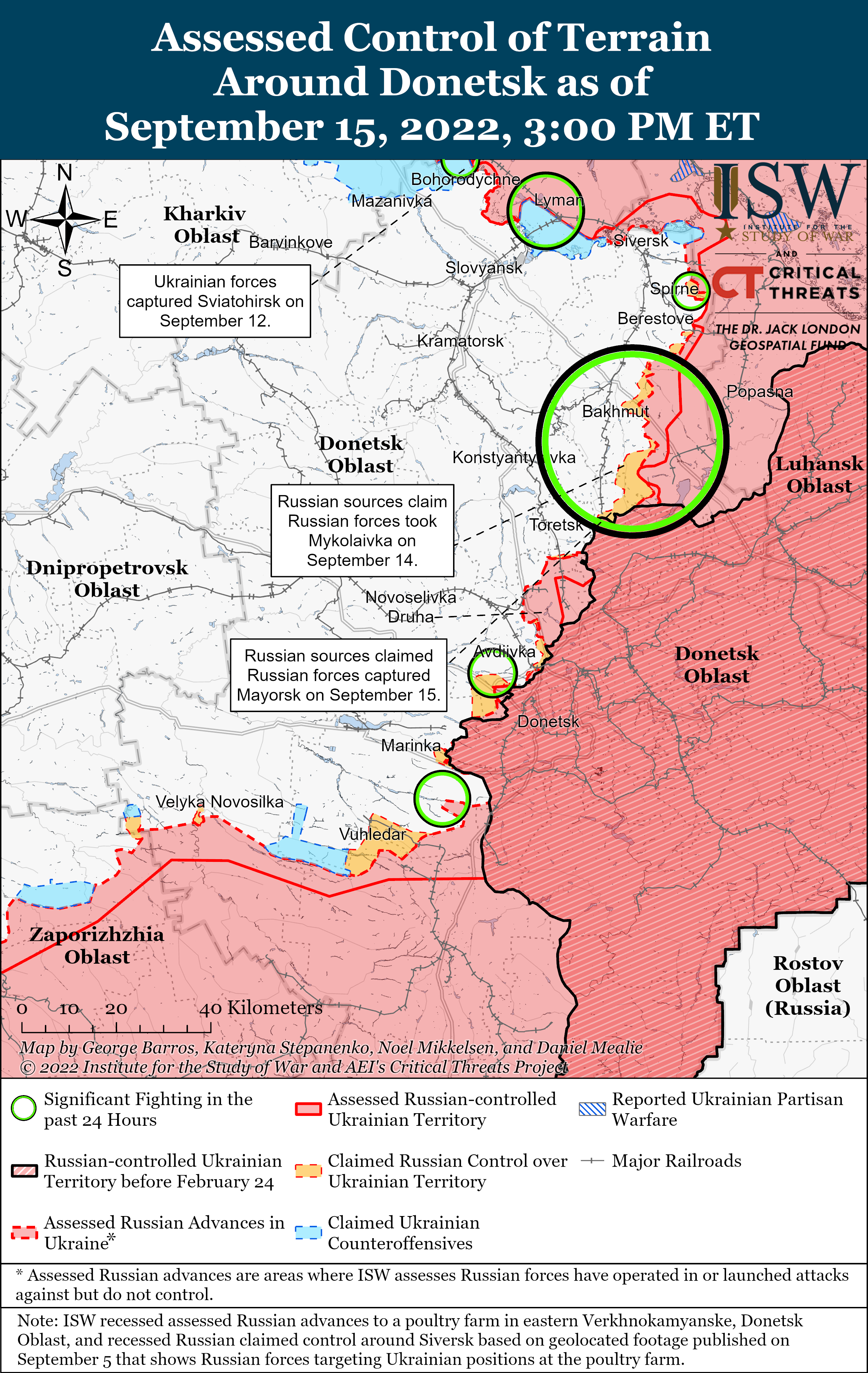 Russian forces continued to strike Ukrainian hydraulic structures in Kryvyi Rih and other infrastructure in Ukraine on September 15. Dnipropetrovsk Oblast officials reported that Russian forces again targeted unspecified hydraulic structures in Kryvyi Rih, and Russian sources published footage of smoke claiming that Russian strikes damaged an unspecified dam on the Inhulets River on September 15.[45] Russian forces are likely continuing to strike Ukrainian dams on the Inhulets River to raise flood levels in an effort to disrupt the Ukrainian bridgehead over the river in northern Kherson Oblast and threaten Ukrainian logistics lines in the same way that Ukrainian forces are targeting Russian crossings of the Dnipro River.[46] Russian milbloggers amplified footage of large-scale explosions in the cities of Uman, Zaporizhia, and Vinnytsia, as well as in Odesa Oblast.[47] Russian forces also launched an Onyx cruise missile from a Bastion coastal missile complex and a Kh-59 missile fired from an Su-35 aircraft at an open area in Mykolaiv Oblast.[48] Social media users reported witnessing the activation of Russian air defense systems in Yevpatoria, Crimea.[49

Russian military leadership continues to pull newly-mobilized forces from every possible source but is unlikely to be able to meaningfully increase Russian combat power with those forces. The Ukrainian General Staff reported on September 15 that the Russian government lifted restrictions on conscription for large families, suggesting that multiple sons from the same family could be forced to fight in Ukraine.[50] The Ukrainian mayor of Melitopol, Ivan Fedorov, reported on September 14 that Russian forces are promoting Russian military service in occupied territories such as Melitopol.[51] Forcibly or even willingly-mobilized Ukrainian civilians without military experience who are ordered to fight their better-trained countrymen are unlikely to significantly enhance Russian combat power in Ukraine.

The Russian Ministry of Defense announced on September 15 that the Russian Military Construction Complex is building a new, modern “military town” in Sernovodskoye in the Chechen Republic.[52] The town will reportedly contain over 50 facilities to accommodate Chechnya-based units.

The Russian proxy Donetsk People’s Republic (DNR) is likely attempting to stop its administrators from fleeing ahead of the Ukrainian counteroffensive, demonstrating the bureaucratic fragility of the DNR. The DNR’s State Defense Committee extended one-time injury payments of 3 million rubles and one-time death payments of 5 million rubles to the families of officers, civil servants, and employees of the DNR’s Ministry of Emergency Situations killed in the line of work, the first time ISW has observed DNR civil servants being promised payment in the event of their injury or death in the war.[53] The DNR is likely attempting to incentivize its employees to remain in place to prevent a collapse in local governance as Ukrainian forces advance. Russian occupation forces have struggled to staff local administrations in occupied Ukrainian territory since the invasion began due to a lack of willing Ukrainian collaborators and competent bureaucrats.