The ongoing, anti-regime protests are likely creating fractures among senior regime officials within the Iranian security establishment. Uncorroborated social media accounts circulated reports that the regime’s Supreme National Security Council (SNSC) held two emergency meetings that resulted in SNSC Secretary Ali Shamkhani’s resignation.[1]  Anti-regime outlet Iran International previously reported that some hardliners were advocating for Shamkhani’s dismissal on November 6, citing an informed source.[2] Another unverified social media account reported that Saeed Jalili--a hardliner who served as the SNSC secretary from 2007-2013—blamed unidentified security officials for failing to violently suppress anti-regime demonstrations. The account additionally claimed that IRGC and Iranian Law Enforcement Command officials expressed concerns about bandwidth constraints and low morale among personnel.[3] CTP cannot verify these rumors and such accounts should be treated with skepticism. SNSC-affiliated Nour News Agency denied that Shamkhani has resigned on November 18, suggesting that the report had garnered enough attention to merit a statement.[4]  Nour’s denial is not dispositive, as the outlet has been known to deny things that have turned out to be true.

Regime officials and regime-affiliated actors alluded to disagreements over protest suppression tactics within the Iranian security apparatus on November 18, however. A Raisi administration official stated that the regime could expeditiously end unrest as soon as “the relevant authorities were willing” on November 18, suggesting divisions within the regime about how much violence security personnel should use to quell protesters.[5] A regime-affiliated cleric in a Chaharmahal and Bakhtiari town similarly stated that officials who lacked the courage to do “great things” should be removed from power and replaced by others more capable of implementing Supreme Leader Ayatollah Ali Khamenei’s vision.[6]  Hardline editor Hossein Shariatmadari, who is reportedly a close confidante of the Supreme Leader,[7] additionally advocated for greater use of force against protesters on November 18.[8] Statements calling to violently escalate against protesters—and criticizing the officials who are purportedly failing to implement this tactic—corroborate CTP’s previous assessments that critical nodes of the regime are unable to reach a consensus on how to confront the Mahsa Amini protests.[9]

Divisions within the SNSC—particularly Shamkhani’s resignation or ousting—would be especially significant given the importance of the council within the regime. The SNSC is the most senior national security and foreign policy decision-making body in the Iranian regime, and Shamkhani has served as the Supreme Leader’s personal representative within the council since 2013. Shamkhani has additionally held several senior security posts within the regime and is an extended member of the IRGC Command Network—the informal human network forged by service together in the Iran-Iraq War that has controlled the IRGC and, increasingly, joint IRGC-Artesh organizations—for decades.[10] Shamkhani is a trusted advisor of the supreme leader, and calls for Shamkhani’s resignation may be an indirect criticism of the Supreme Leader’s protest suppression response. Criticisms of Shamkhani—and holding him responsible for ongoing unrest—could alternatively suggest that Khamenei is playing a less active role in executing senior policy decisions than he typically would.

Shamkhani is a most unlikely public scapegoat.  He does not have a prominent public persona and is most important as one of the most inside of insiders.  He may have considerable influence over the course of SNSC discussions that determine the shape of the regime’s response to protests especially if the supreme leader is inaccessible or unable, mentally or physically, to fulfill his responsibilities.  It is noteworthy that Khamenei has not appeared in public recently and has reportedly participated in other events without posting any current photos or videos.[11] The shadow of a possibly imminent supreme leader succession has covered the entire protest period and could be manifesting as a challenge to one of Khamenei’s closest and most trusted advisors and mouthpieces.

The IRGC has threatened to launch a ground invasion into Iraqi Kurdistan in the coming weeks. AP published additional information on November 18 about IRGC Quds Force Commander Esmail Ghaani’s November 14 meeting in Baghdad with Iraqi Prime Minister Mohammed Shia al-Sudani, Iraqi President Abdul Latif Rashid – A Kurdish politician – and several other Iraqi and Kurdish officials. Ghaani reportedly warned that the IRGC will conduct ground operations against anti-regime Kurdish militants based in Iraqi Kurdistan unless the Iraqi army fortifies the Iran-Iraqi Kurdistan border and disarms all anti-regime Kurdish militias operating within Iraqi Kurdistan.[12] The IRGC has intermittently conducted artillery, rocket, and missile attacks into Iraqi Kurdistan since Iranian protests began in September 2022.[13] The Iranian regime has blamed anti-regime Kurdish militias operating on both sides of the Iran-Iraq for fomenting Iran’s ongoing domestic unrest, as CTP has previously reported.[14]

The Iraqi constitution forbids the Iraqi army from entering Iraqi Kurdistan, and the Iraqi army likely lacks the military capacity to meet Ghaani’s demands.[15] A significant Iraqi army redeployment to Iraqi Kurdistan would likely enable ISIS to intensify operations in other areas of Iraq and undermine the popularity of the current Iran-friendly government in Baghdad. Kurdistan Regional Government (KRG) Prime Minister Masrour Barzani called on Iran to cease military operations against anti-regime militants in Iraqi Kurdistan and warned Iran that its domestic “tensions should not be exported to neighboring countries” in a November 17 statement.[16] Barzani’s remarks indicate that the KRG and significant portions of the Peshmerga, the KRG’s official military force, would likely actively resist any IRGC or Iraqi army efforts to operate against Kurdish groups within Iraqi Kurdistan. Iraqi and Kurdish politicians very likely will not accede to Ghaani’s demands, suggesting he may have presented them with an unacceptable ultimatum to use as political cover for a planned ground invasion.

The potential renewal of Turkey’s campaign against armed Kurdish groups in northern Syria may, however, impede close cooperation between the IRGC and Turkish military. Turkish rhetoric has emphasized that the November 13 terror attack is connected to alleged terror cells in the Manbij area of northeastern Aleppo Province.[21] Syria. Iran has historically prioritized protecting the Shia-majority towns of Nubl and Zahraa located approximately 75 kilometers from Manbij; Hezbollahi militants maintain a significant military presence around the villages.[22] A potential Turkish military operation aimed at Manbij may also include military activity nearby the Shia-majority villages, which Lebanese Hezbollah militants would likely fiercely resist. A direct military confrontation in northern Syria consequently may obstruct military cooperation between Iran and Turkey in Iraqi Kurdistan.

At least 33 protests took place in 31 cities across 13 provinces on November 18. CTP assesses with moderate to high confidence that protests occurred in the following locations: 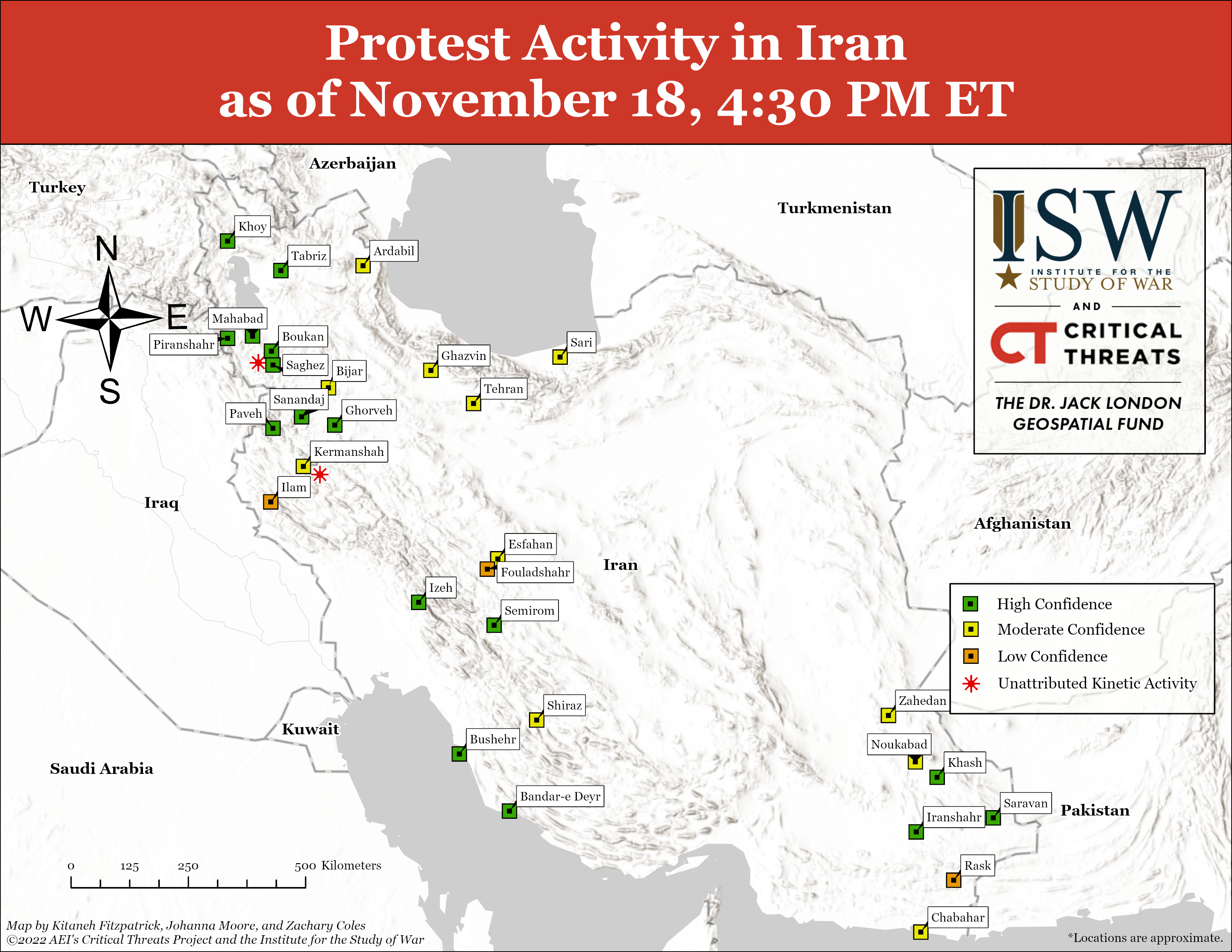 Prominent Sunni Cleric Moulana Abdol Hamid continued to criticize the regime’s violent protest suppression response during his weekly Friday prayer sermon on November 18. Abdol Hamid stated that Sistan and Baluchistan residents would not surrender to threats nor compromise their demands.[58] Abdolhamid traced the origins of the present unrest in the province to the regime’s unfair treatment of Iranian Sunnis and the Baloch since the 1979 revolution. [59]